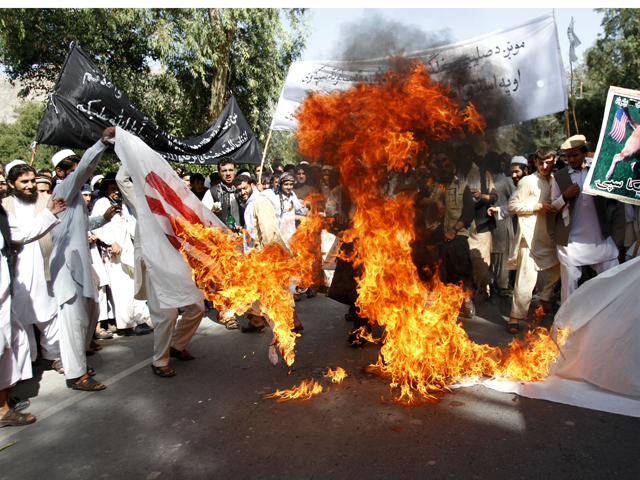 (AP) KABUL, Afghanistan - The Afghan president on Wednesday urged his nation to rally behind the push for peace negotiations with insurgents despite persistent violence, evoking the memory of a former leader who was assassinated while trying to broker talks with the Taliban.

"We should all strive for peace," said Hamid Karzai, adding that doing so continues the mission of slain former President Burhanuddin Rabbani, killed by a suicide bomber posing as an emissary from the insurgents.

Karzai spoke at a memorial marking the one-year anniversary of Rabbani's death, which badly shook confidence in the chance that a peaceful resolution could be achieved.

The ceremony came a day after a suicide bomber rammed a car packed with explosives into a minibus carrying foreign aviation workers to the airport in Kabul, killing at least 12 people, including nine foreigners.

A militant group said the attack aimed to avenge an anti-Islam film that ridicules the Prophet Muhammad. The film has sparked angry protests across the Muslim world, including in Afghanistan, after a video clip of it was posted on the Internet last week.

The attacks come at a time when the Afghan-U.S. alliance appears increasingly shaky and many Afghans predict civil war after the majority of international forces depart at the end of 2014.

And the Afghans may have to stand on their own more quickly than previously envisioned. A rash of attacks by Afghan police and soldiers against their international counterparts has prompted the NATO military coalition to restrict joint operations with Afghan forces.

So far this year, 51 international service members have died at the hands of Afghan forces or militants who have infiltrated them. That is more than 18 percent of the 279 international troops who have been killed in Afghanistan since the beginning of the year, according to figures compiled by The Associated Press.

Under the new NATO rules issued on Sunday, operations that mix small-sized Afghan and coalition units are no longer considered routine and require the approval of the regional commander. Previously, coalition troops routinely conducted operations such as patrolling or manning outposts with small units of their Afghan counterparts.

It's unclear whether the coalition's exit strategy can succeed with less partnering between foreign troops and Afghan policemen and soldiers, who are slated to take over for foreign combat troops by the end of 2014. NATO considers joint missions key to training Afghan forces.

"I don't think it's a strategic setback. It's not ideal and it's not what we wanted to happen (but) it is a sensible arrangement and it is temporary," Gass said, having just completed his 18-month tour.

"It was a setback but it is one that we will recover from," he added.

A year ago, before Rabbani's slaying, Afghans and their international partners seemed more optimistic about the future. Rabbani was the head of a group tasked with bringing the Taliban to the negotiating table and NATO was in the process of handing over cities and provinces to Afghan control, while saying they would still be close at hand as advisers and mentors.

Then on Sept. 20, 2011, a man posing as a high-level insurgent emissary seeking peace went into a meeting with Rabbani with a bomb hidden in his turban. He detonated the explosive as he shook Rabbani's hand, killing the former president on the spot. Rabbani's son later took on the leadership of the peace council, but talks are widely considered stalled, if they ever truly started.

And Taliban attacks and assassinations of government allies only increased this summer.

Karzai recalled how Rabbani consoled him when the president lost a brother who was gunned down by insurgents in July 2011. Many Afghans criticized Karzai for continuing to pursue reconciliation with the Taliban but Rabbani stood by his side, telling him that, "You did not lose the voice of peace. The Afghan nation needs peace," the president recounted.

However, the tone at the memorial was not all conciliatory. Speaking after Karzai, Rabbani's son lashed out at the Afghan government, accusing it of not doing enough to bring his father's murderers and those of other politicians to justice.

"People have the right to know who the people are behind these series of killings and why," Salahuddin Rabbani said. "Unfortunately, the government has failed in its investigations."

No one immediately claimed responsibility for the attack, but it matched the pattern of Taliban strikes that typically target Afghan forces or government workers.

Then in the early evening, bombs went off in the two main southern cities of Kandahar and Lashkar Gah. The bomb in Kandahar went off near a police checkpoint, killing two police officers and one civilian, said provincial government spokesman Jawed Faisel. Then a gunman in Lashkar Gah to the west fired on police on motorcycles, killing another two officers and one civilian, said Helmand provincial spokesman Daoud Ahmadi.