I've been known to make some rash decisions in my life.

I've sled down Suicide Hill on a metal lunch tray.

And one time, I didn't wait 30 minutes before swimming.

But Tuesday, I made one of the strangest decisions of my life: I posted an open invitation for a stranger to join me at a Twins game.

When the day started, I never imagined the night would go down this path.

Here's the Reader's Digest version: My friend hurt her neck and had to cancel. None of my other friends could go. I posted my disappointment on Twitter and said I'd be going alone.

That's how the whole thing began. Michael Rand (@RandBall) suggested I invite the first person to respond the seat next to mine. After some careful consideration; I did.

After a few re-tweets, I got a response. From a guy named Jimmy, whom I don't know.

So that's that. Jimmy and I were going to a Twins game.

I received overwhelming support from other media folks I only know through the magical world of Twitter. Which, really, only proves I fall victim to peer pressure when I think there's good shtick.

I decided to use the hashtag #WTMJ (When Tracy Met Jimmy) as a way for people to follow what we were doing. If I was going to do this, I might as well commit 100%. I also want to say up front, it was not a date. It never was and never was intended to be.

The game started off slow. It was awkward by all accounts. I didn't know this guy and he didn't know me. I started tweeting random facts about him and soon the thing snowballed. People actually cared what was going on. Between the third and fourth innings, we couldn't keep up with the responses or follows. We joked Jimmy and I were tweeting more than talking.

Then someone started the idea we should be on Kiss Cam. It's funny how the internet works. Someone says something and suddenly there's a camera guy waiting in our section. Not gonna lie, I was uncomfortable because I just met the guy 90 minutes earlier. But we talked about it and I gave him very platonic peck on the cheek.

By the end of the night my twitter account exploded. Less than 24 hours later, I have 140 new followers. #WTMJ was a trending topic in Minneapolis. And a friend who's vacationing in Hawaii just emailed me to say she read about my evening online.

It's important for me to say that I know this could have been a very dangerous scenario. Unfortunately, it's a reality of the world we live in. Working in a newsroom, I hear all too often about people who unknowingly put themselves into situations with bad results. Situations that in retrospect seem obviously dangerous. I weighed many factors before deciding to do this. Some included, it was at a very public venue. There are roughly 40,000 people at Target Field. My usher Tom has become a friend, and stops by frequently between innings to chat. A good friend was at the game and ended up sitting with us from the 5th inning on.

More than anything the biggest takeaway I'll have is realizing I truly stepped outside my comfort box. Well, I guess took a running leap out of it. A lot of people believe the world is getting smaller because of social media. Any of us can meet people from around the city, state or world without leaving our couch. I'm an avid Twitter and Facebook user. Social media is shaping the way we all interact. But breaking through that virtual barrier is something people need to try doing more often.

I've met many people through Twitter, most are work contacts and fellow Journalists. A small selection have become friends. But, for me, it's important to remember that behind silly screen names that don't always make sense, there is a real person there. And it's OK to try something different as long as you're safe about it.

I have no regrets about inviting a complete stranger to Tuesday night's Twins game. I enjoyed myself and I believe Jimmy did too. Even TC Bear got in on the action and took a picture with us at the end of the night. Plus, the Twins won, and seeing your team win is really what going to baseball games are all about.

Will I ever see Jimmy again? Likely not. But that's OK, it wasn't the point of the night. Now we both have a crazy story to tell and made a lot of people smile as they watched it unfold. Maybe it'll inspire others to try something different too.

So what do you think? Would you try this? Have you tried this? Share your thoughts below!

Here are some other pictures from the night: 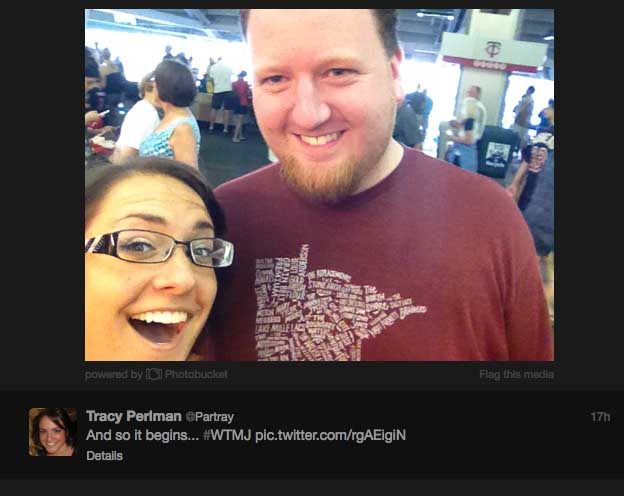 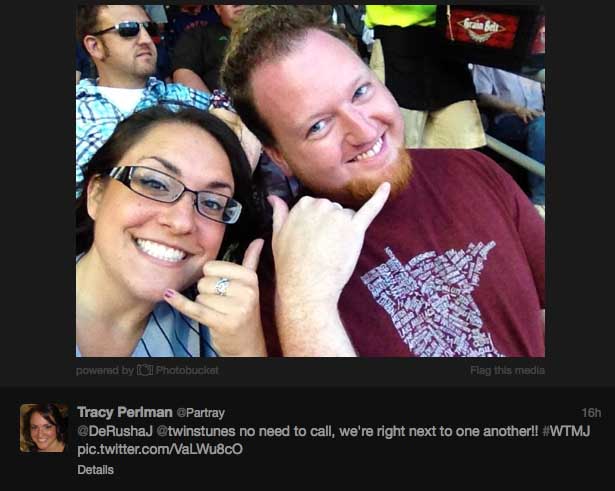 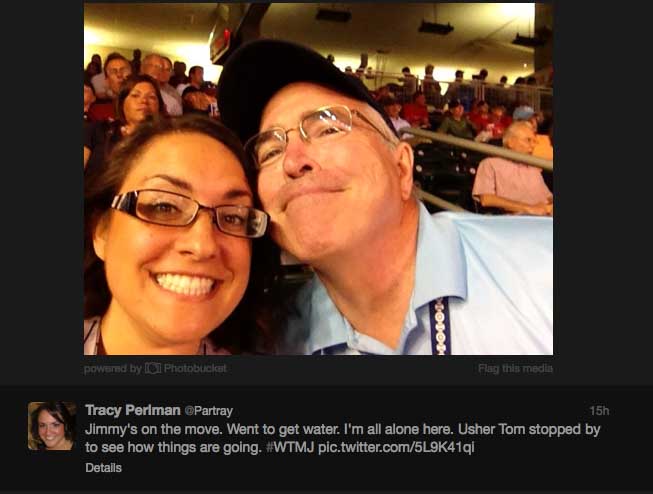 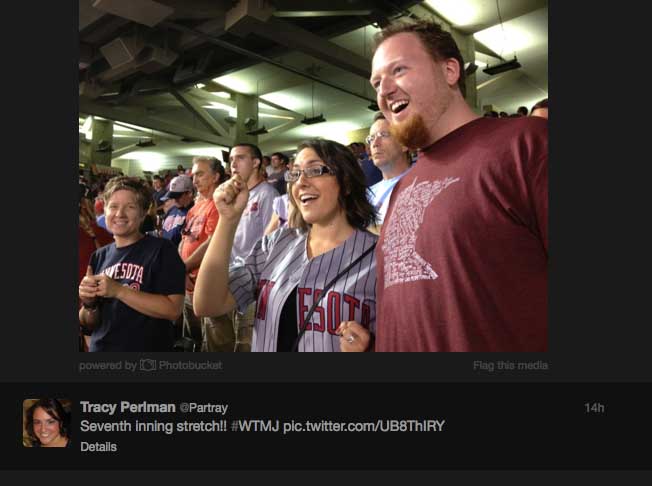 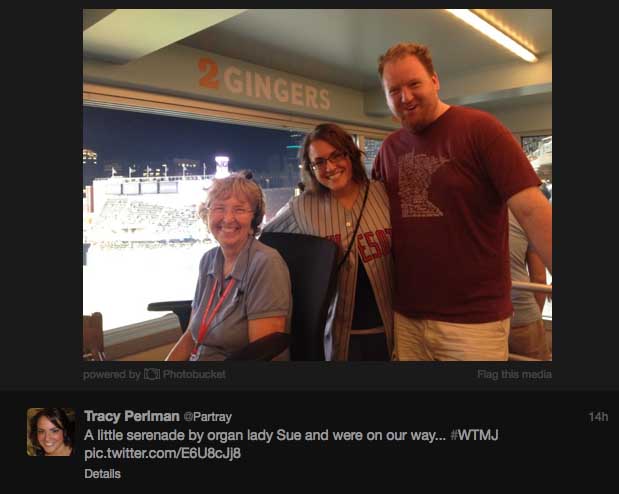 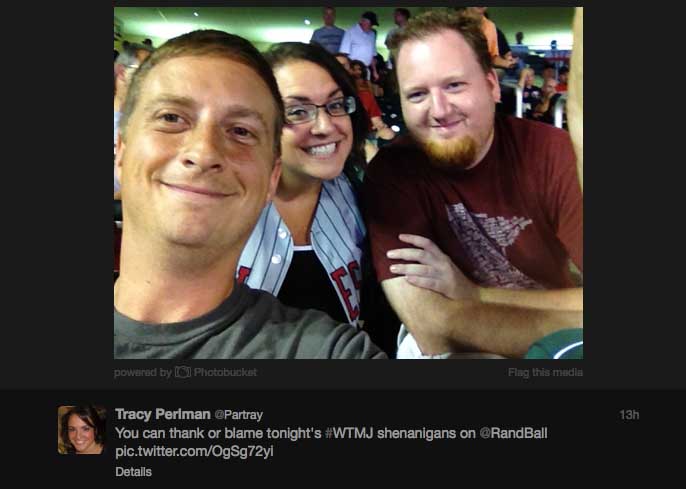 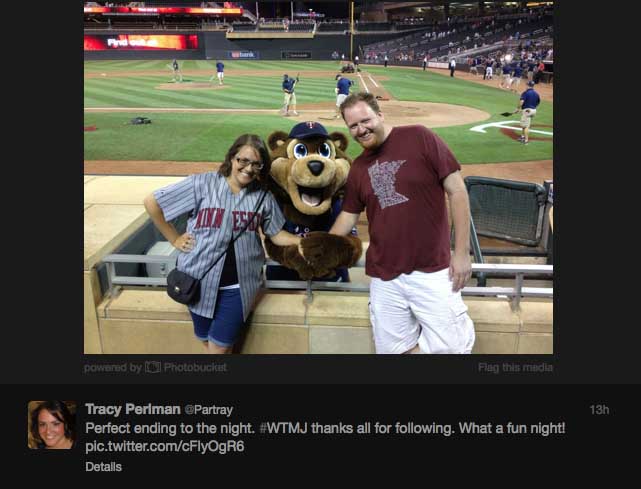