MINNEAPOLIS (WCCO) -- The Minnesota Pollution Control Agency has extended and upgraded the air quality alert in much of the state due to "unprecedented" conditions caused by wildfire smoke.

The air quality alert is extended until at least 3 p.m. Tuesday. The affected area is all of Minnesota, including the tribal nations of Grand Portage, Fond du Lac, Upper Sioux, Leech Lake, Red Lake, Mille Lacs, and Prairie Island.

In a large area stretching from northern Minnesota to the Twin Cities, fine particles are expected to reach the "Purple AQI category", which is a level considered very unhealthy for everyone. WCCO's Director of Meteorology Mike Augustyniak says those in the purple areas should stay indoors as much as possible. 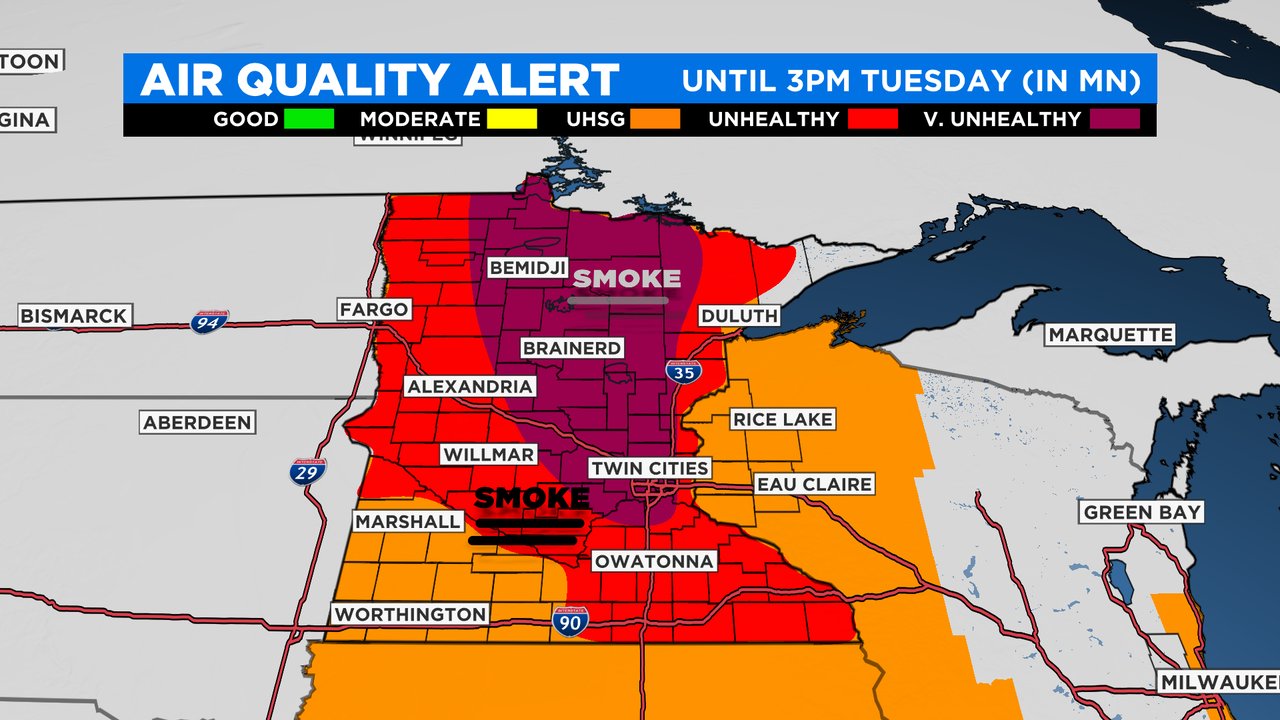 "Smoke from Canadian wildfires lingers over most of Minnesota. There will be some slight improvement in air quality throughout Friday and Friday night," the MPCA said in a release. "However, on Saturday northerly winds behind a cold front will bring more smoke from wildfires located north of the Canadian border in Ontario and Manitoba into Minnesota. This reinforcing batch of heavy smoke is expected to arrive starting Saturday morning."

The MPCA says fine particle levels will begin to improve Tuesday as southerly winds begin pushing the smoke out of the state.

The agency encourages people who are affected by unhealthy air quality, such as the elderly or those with respiratory or heart conditions, to limit their physical activity and take the proper precautions. Everyone is advised to take precautions when air quality is unhealthy, including taking it easy and listening to your body. More health-related information on air quality can be found here.

As of Friday morning, air quality conditions were listed as unhealthy around the Twin Cities and in north-central Minnesota. The fine particles in the smoke can be harmful to people with lung or heart issues, and they can also affect the elderly and young children. Officials advise that people in sensitive groups limit time outside and avoid strenuous exercise or activity.

Western Wisconsin is also under an air quality alert.

The weekend forecast looks to be mild and dry, with temperatures in the low 80s. While light rain showers moved over southwestern Minnesota on Friday, no other significant rain is in store for the first few days of August.

Much of Minnesota remains under drought conditions. As of the latest U.S. Drought Monitor Report, 75% of the state is experiencing severe drought.