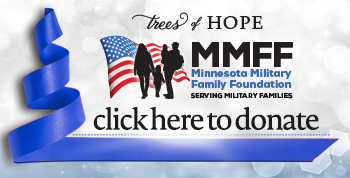 MINNEAPOLIS (WCCO) - Sometimes a service member's experience during deployment pales compared with what they go through when they return home.

Derek and Julie Schenkle welcomed Grace Elizabeth into their lives 15 weeks early. She weighed a little more than a pound.

"It's been a tough time for the last four and a half months," said Derek Schenkle.

His two tours in Iraq do not compare with the battle he and his wife, Julie, are fighting to get their little girl breathing on her own.

Grace Elizabeth was born with chronic lung disease. One of her lungs was partially collapsed.

She's spent the past 150 days at Children's Hospital in Minneapolis.

The Schenkles said there prayers are being heard as Grace improves daily.

"She now weighs 7 pounds, 9 ounces," Julie Schenkle said. "She is four-and-a-half months old and our little bundle of joy."

Grace's parents spend every moment they can with their daughter.

"God has blessed us with an amazing little girl," Julie Schenkle said. "She is such a fighter, and that's why she is named Grace. She is a blessing."

Every day someone is at the hospital, holding or reading to Grace.

Christmas stories typically read by the fire at home will have to be read at the hospital on Christmas Day.

"I was hoping my Christmas miracle would be home with me on Christmas," Julie Schenkle said, "but, you know, breathing on her own and stuff--that's good enough for me."

The Schenkles said the support they get from the Family Assistance Center and the Minnesota Military Family Foundations allows them time away from work so they can help care for their daughter.

"The Family Assistance Center set us up with grants and scholarships to help us pay for our bills," Derek Schenkle said. "We've received multiple gift cards for Wal-Mart, for Texas Roadhouse, for Target."

Now they can concentrate on what's important.

"Our goal is to have her breathing on her own before the New Year," Julie Schenkle said.

The Schenkles will be right there for all the little steps Grace makes toward that goal. They say they feel blessed to have the love and support of so many.

"It really puts your faith back in people," Julie Schenkle said.

The Schenkles said they can't find the words to thank the doctors and nurses at Children's Hospital and everyone with the Minnesota Military Family Foundation.

They say that support will help get Grace home shortly after the New Year.