Spring has to be one of the more hotly contested seasons when it comes to public opinion. I have to laugh when I hear the conversations going on in the streets or in coffee shop (while biting my tongue, of course)

If it gets too warm, 'We didn't have any spring! Straight to summer again!'

If it's damp and cool, 'Spring in New England blows. Just extended winter.'

If it's a mix of both, 'When is the real spring weather going to show up?'

I think general understanding of what's typical in spring is misunderstood more than any other season. It's actually been kind of nice this year to have a 'real' spring. We've had warm days and chilly stretches. It's been a bit dry, but not alarmingly so. No early season heat waves. Plenty of sun. Allergy season seems to have been spread out with a couple cold snaps helping to bring on the pollen in stages. And yes, having frost in May is perfectly normal. But whenever we send out a map warning of its potential, there's complete alarm. 'WHAT?! This is ridiculous!' Nope, it's weather. And we'll be dealing with weather late this weekend. 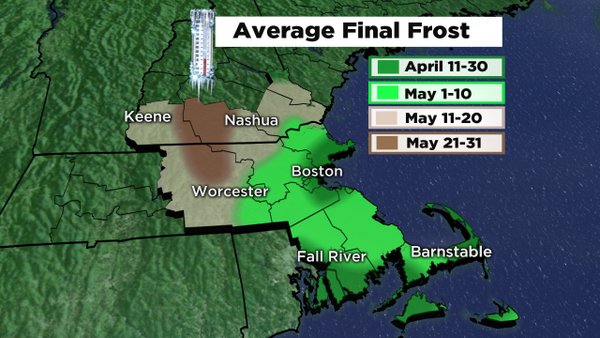 When would frost no longer be expected? Well above is a look at the average final frost of the season. It comes early in Metro Boston and near the coastline, where urban heat islands and the ocean help to moderate temps. But for most inland areas, the average final frost doesn't arrive until mid to late May (which means it has come even later many times before). This is why the old advice of planting Memorial Day Weekend is around. For crops like pumpkins, melons, tomatoes, peppers, cukes, and annual flowers...you need warmer nights to get them growing. And they all hate cold. The only thing that is truly safe to have going in late April or early May are your cold crops like peas, asparagus, and leafy greens (among a few others). There's always a big impulse to get started as soon as we start getting warm days, but IMO it's not worth the risk when plants don't come cheap. You don't want to head to the garden center, spend mucho bucks, and then have one cold night ruin it all. Many green thumb gardeners have cold frames or small greenhouses to get started early and lower their risk during cold snaps. If you don't have that kind of setup, it's often safer to wait. 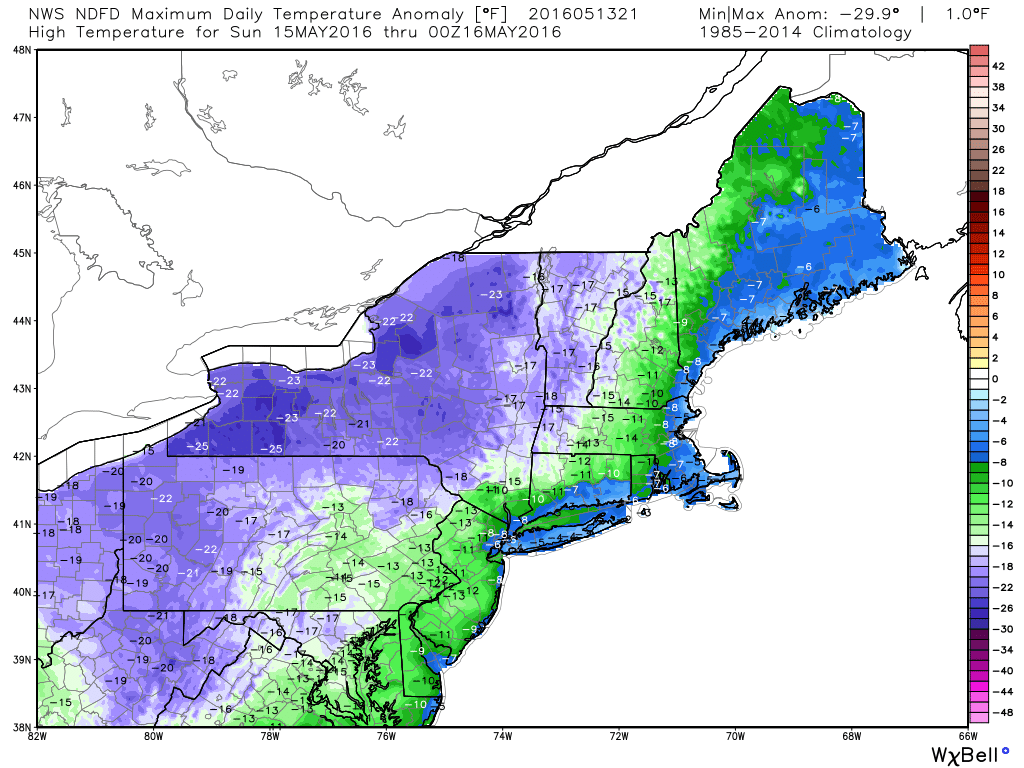 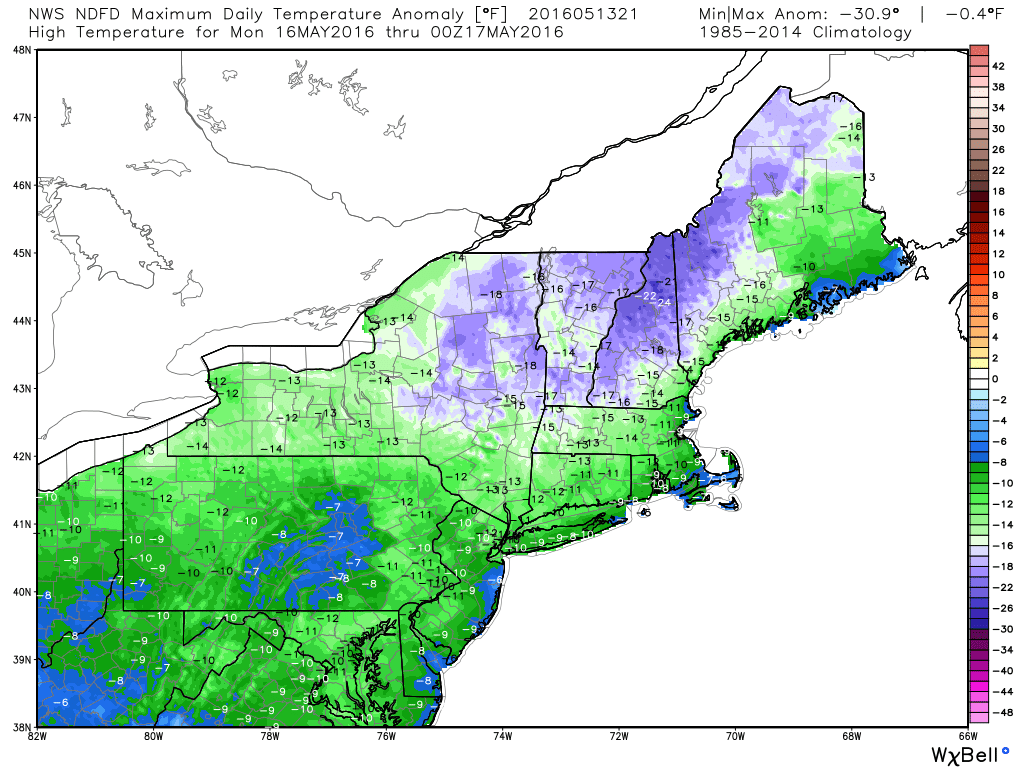 That brings us to this weekend. A brief but sharp blast of cool air is about to uncoil from Canada, bringing temps 10-25F below average for a small 36-48 hour period. The good news is we get to enjoy one more gorgeous day before it arrives! Saturday features plenty of sunshine and temps nearing 80F for many communities, with 60s along the Cape and Islands on southwesterly breezes. This will likely be our last truly warm day for at least a week, so soak it up. 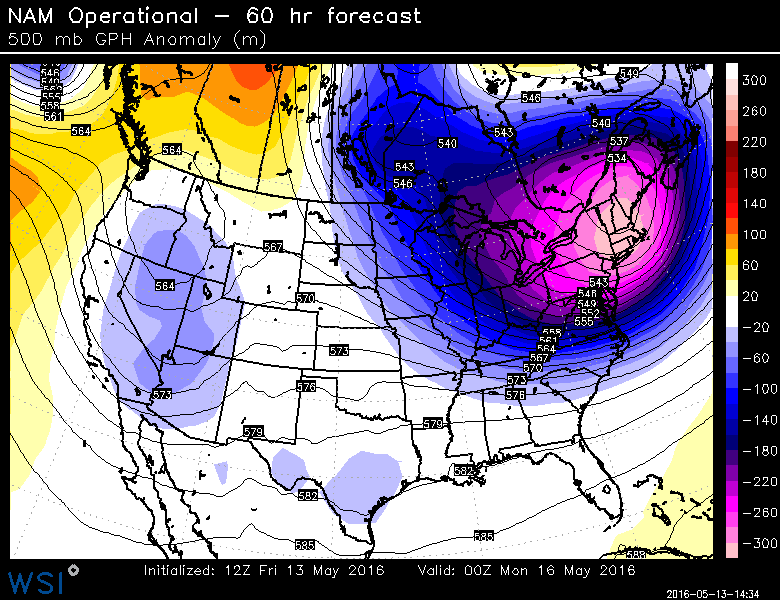 Then a potent cold front swings through on Saturday night with scattered showers and downpours, ushering in a cold mid-May air mass. Highs will struggle to hit 60 on Sunday with brisk WNW winds. The upper atmosphere will cool so much that instability showers will pop on Sunday afternoon, many of which could feature small hail. This cold pocket is impressive and should also help deliver strong wind gusts Sunday afternoon through Monday, generally 30-45mph.

The wind should end up saving us from frost Sunday night, although it will feel quite chilly. But After a day stuck in the 50s Monday, those winds should start to relax and skies will clear. This is the night I'm targeting for potential frost across the area. As is often the case this time of year, it will come down to whether or not winds can go calm. I doubt we'd end up frosty on the Islands or for most of the Cape, but it's not completely out of the question. The highest risk for subfreezing temps will be for inland locales. 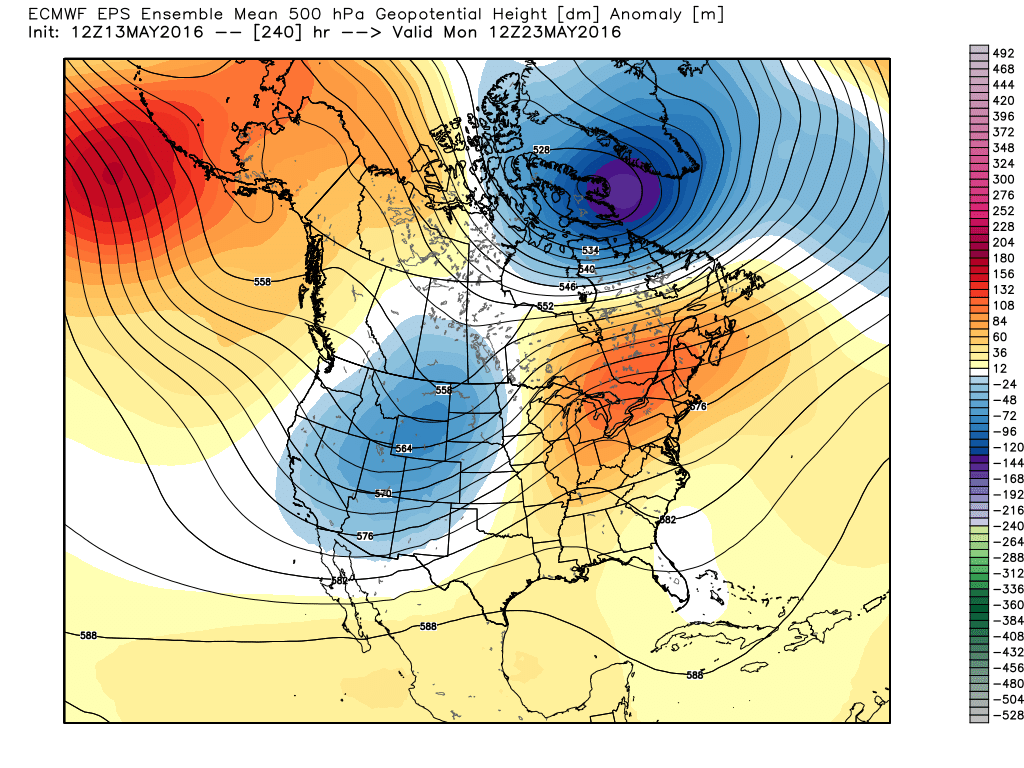 What follows? Most of next week looks pretty seasonal, if not a touch below average for this time of year. But as we head into next weekend and the final week of May, signs are for a decent warmup across the Midwest and Northeast. The big picture pattern has been indicating troughing for the west (which will ramp up severe weather in the Plains) and ridging over us. So we may close out with a warm stretch that hopefully will last into Memorial Day Weekend (but let's be real, it's New England).