BOSTON (CBS) -- Let's go ahead and get all of the qualifiers out of the way. Tony Romo was out, replaced by Brandon Weeden. Dez Byrant was out, replaced by ... well, replaced by nobody. DeMarco Murray is long gone, and Joseph Randle doesn't look like he'll be vying for rushing titles any time soon. And though the Cowboys' offensive line was being universally praised as the best unit in football last season, few would be making such claims in 2015.

With all of that being established, none of it should take away from the job that the Patriots' defense did in Dallas.

Though the final score made the game appear to be a laugher, the reality is the game would have looked very differently if the defense didn't bring it in the first half. It was in that first half that Tom Brady's offense couldn't get off the ground, punting on three of their first four possessions and only scoring a field goal after a drive on which they gained just 15 yards.

Had the defense let its collective focus slip for even one play, the Patriots could have found themselves trailing, and in a building full of 100,000 folks, climbing back from a deficit can be quite difficult. But the defense made sure that would not be an issue.

The most impactful play came from Jabaal Sheard, who just absolutely dominated left guard Ronald Leary late in the second quarter before leaping in the air and pulling some sort of professional wrestling move to sack Brandon Weeden. It was vicious.

And though the offense rolled in the second half, the Patriots' defense never let up, forcing two turnovers and only allowing short gains, which forced the Cowboys to essentially drain the clock on themselves.

Say what you will about the Weeden-led offense, but the Patriots were also without Dont'a Hightower for most of the game. Plus, the Cowboys didn't score a touchdown for the first time since 2011. Hell, even the Jaguars scored a couple of touchdowns against the Patriots. The Tyrod Taylor-led Bills scored 32 points on New England.

So don't discount the six-point showing in Dallas by the New England defense. It carried the team when Brady and the offense weren't yet functioning at the proper level, and it showed that the Patriots are a more complete team than perhaps they get credit for.

Now let's dive into the leftover thoughts from the Patriots' 30-6 win in Big D.

--I understand that not every NFL team prepares the way the Patriots do, but come on, Cowboys! When you won the coin toss, you had a chance to put the Patriots in a position they don't like. You could have made them receive to start the game. You could have eliminated any possibility that they'd pull off a "double score" around halftime. Yet you chose to receive, like dummies, and then you went three-and-out.

Come on, Cowboys. Read a book for me one time.

--All of that earlier praise of the defense was warranted, but everyone should be holding their breath awaiting word on Dont'a Hightower. He, along with Devin McCourty, is one of the indispensable members of the Patriots' defense. Though they could likely survive a few weeks without him (the Colts, Jets, Dolphins and Redskins fill the next month of the schedule), but Hightower will be needed if this Patriots team hopes to come close to achieving what last year's team accomplished.

--If you want to know how fierce Hightower is, just ask Darren McFadden. The 220-pound running back tried his best to slow down a charging Hightower. 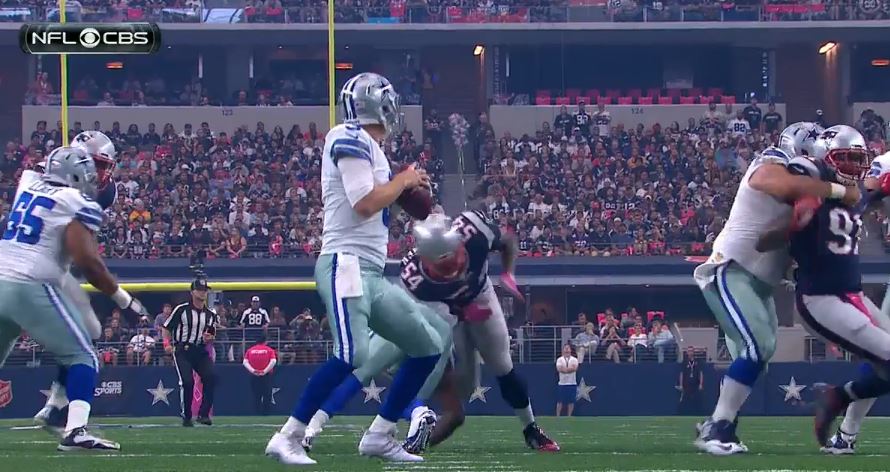 It did not work. 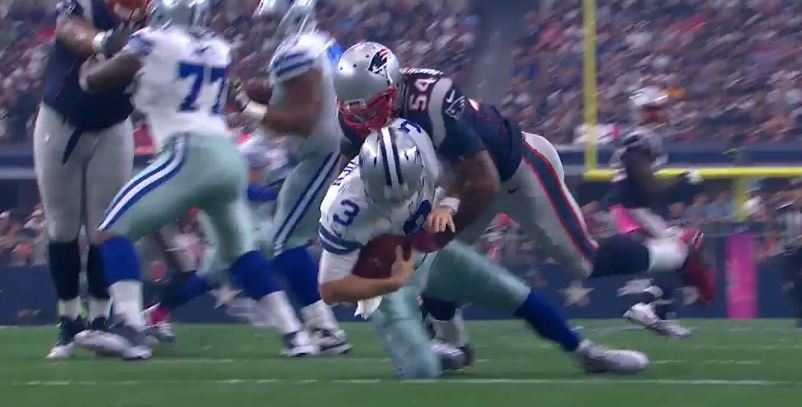 --I've long been impressed with the bowling ball style of running employed by LeGarrette Blount, but I don't think he did the greatest job on Sunday. Particularly, on the third-and-1 on the first play of the second quarter, he had a chance to cut up a decent-sized hole, where he'd have to run over one man (linebacker Anthony Hitchens). 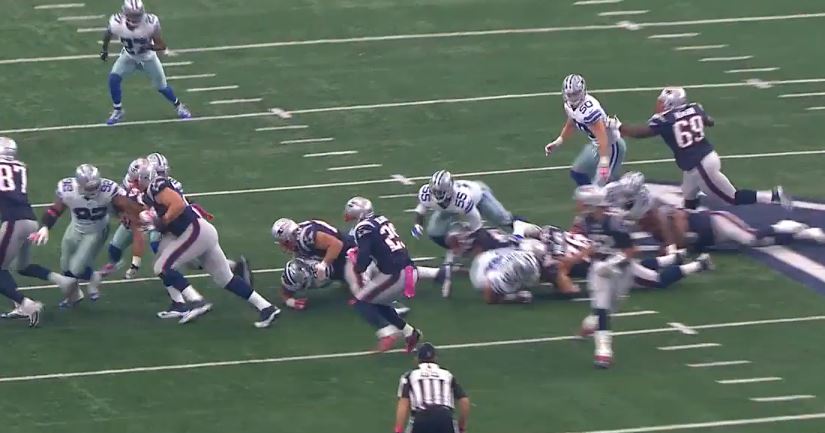 Instead, Blount dawdled laterally and eventually ran into two Cowboys. He didn't get the first down. Blount needs to take that run vertically, drop his shoulders and fall forward to gain the yard. That's his game. Running sideways is not.

--The Cowboys aren't the most talented team right now, given their injuries, but their inability to make plays was staggering.

How many Cowboys had a chance to recover Tom Brady's fumble? 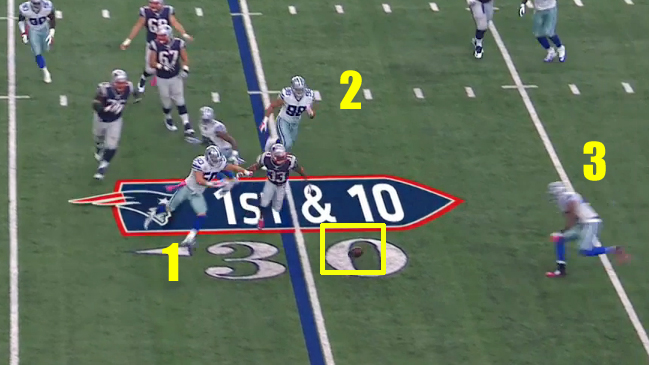 How many Cowboys had a chance to keep Dion Lewis out of the end zone? 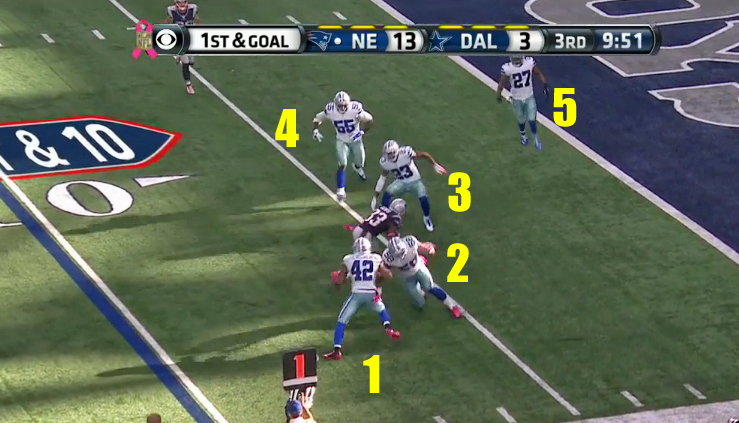 How many Cowboys could have prevented Julian Edelman from scoring on a 59-yard catch-and-run?

--The Edelman touchdown was partially aided by a pick set by Danny Amendola, and it came just two plays after Edelman was penalized for setting an illegal pick to spring Amendola for a nearly identical reception. It seems as though the only distinction between a legal and pick and an illegal pick is whether the receiver braces for impact and drops a shoulder before colliding with the defensive back or he throws his arms above his head as if to say, "Whooooo me? Couldn't be moi interfering with this defender's chance of covering that guy!"

Amendola did the latter, and it worked out. But the NFL has a pick play enforcement policy. The Patriots -- who have been on the losing end of such a strategy for years with Peyton Manning's offenses -- will probably try to exploit it until it's fixed.

--Remember when Julian Edelman did this to Morris Claiborne?

--For that matter, remember when Rob Gronkowski did this to Byron Jones?

Emasculating. Poor Jones had Gronkowski covered perfectly, but then the tight end not only slipped free to get open and made the catch, but then smushed the adult man down to the ground all in one motion. It's hard to come back from that. I wouldn't be surprised to see Jones on Dallas' injury report next week with a bruised ego.

--Brady handled the heavy pressure very well, as he didn't let it affect him or throw him off his game. He wasn't "seeing ghosts" and he wasn't scared to stand in the pocket, even after absorbing more than a half-dozen shots in the first half.

The only show of frustration he had was a small one, and it came after Greg Hardy drove right through the quarterback's spine in the second quarter. Brady hit the ground and looked up with his "I'd prefer not getting demolished every other snap" face. 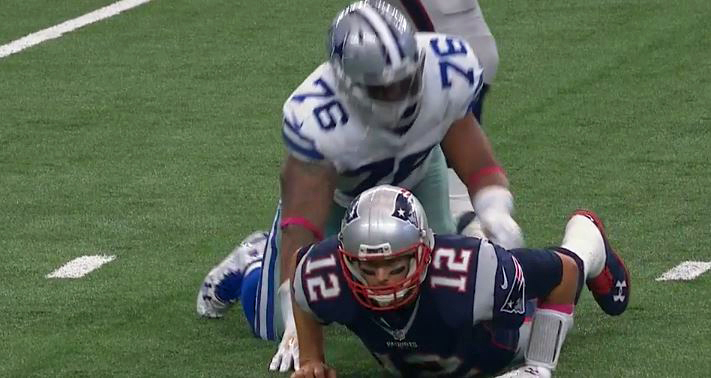 He then gently gestured to Nate Solder, as if to say, "Hey, man. Double-you tee eff, mate?" 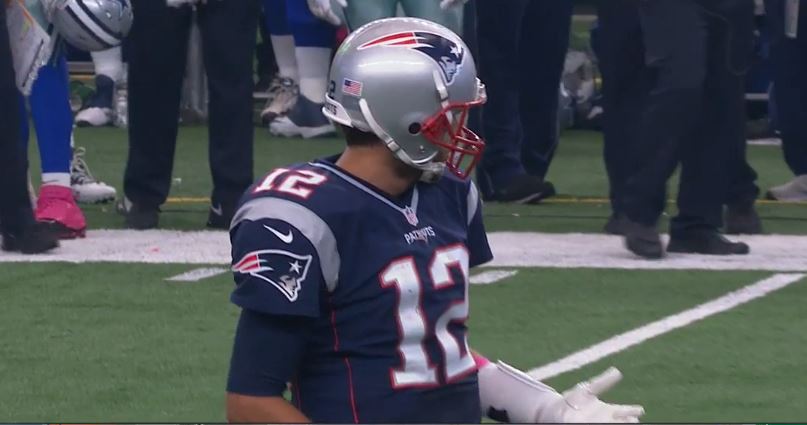 --Lewis made the incredible play on the touchdown, and you've seen it a thousand times by now. But he made a play earlier in that drive which in my mind was equally impressive.

Lewis caught a pass in the right flat, and had this in front of him:

He planted his right leg and cut inside, quickly leaving safety Jeff Heath in his dust. He then burned past a diving Sean Lee, whose arm tackle attempt was fruitless, and then as Byron Jones wrapped his arms around Lewis' hips, the running back still had enough power to bowl over Morris Claiborne.

Lewis had another impressive play in the second quarter on a third-and-1, when he was hit behind the line of scrimmage but seemed to bounce a foot or two backward to avoid getting tackled.

He slipped the tackle and then outran four Cowboys to turn it into a gain of 13 yards. Brady scored on a QB sneak on the next play.

--The touchdown, though. That touchdown! Dion Lewis looked like the good guy in an action movie who takes out a room full of incompetent henchmen in a matter of seconds. You think, "That was cool, but it could never happen in real life." That's true, unless you're Dion Lewis. 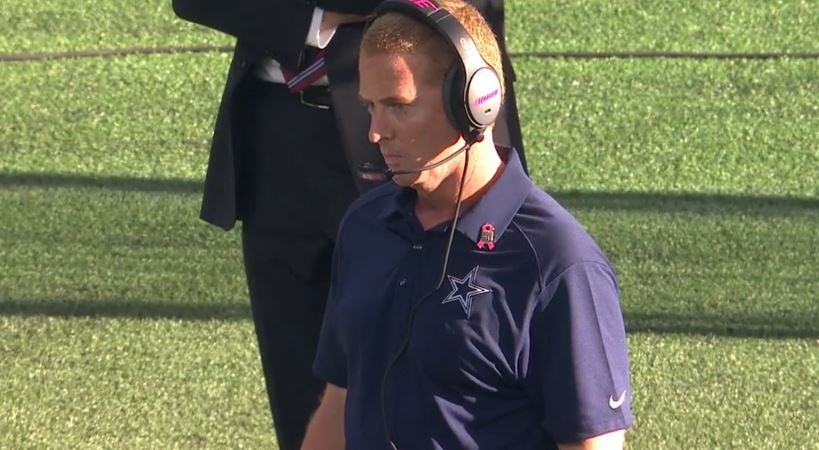 I would have tried ... I don't know ... sending my Hall of Fame tight end into the end zone and try to turn my 8-minute and 31-second drive into seven points, instead of three, when I'm trailing by 17 points in the second half. Crazy idea, I know, but I guess that's why I'm me and Jason Garrett is Jason Garrett. 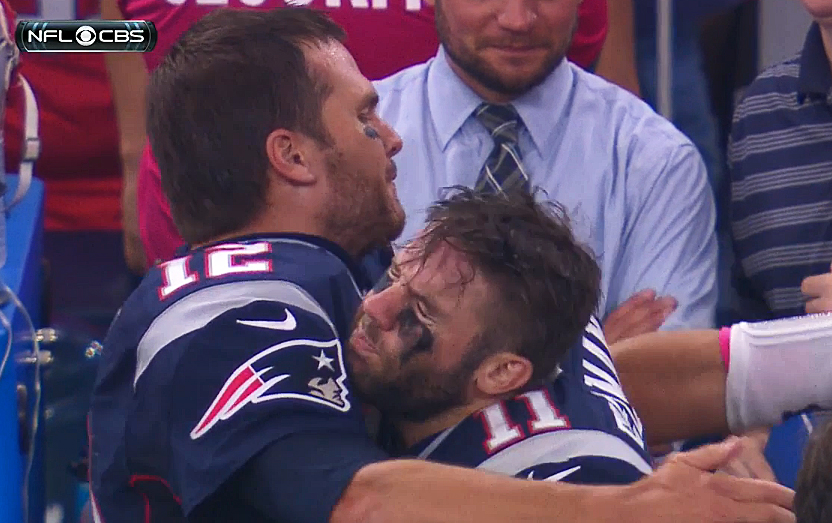 --Look, I know that talking about kickers isn't exciting. I get it. But loooook at how high the football cross the goal posts on Stephen Gostkowski's 57-yard field goal. LOOK!

What a weapon. That would have been good, legitimately, from at least 65 yards. I look forward to watching him in kick in Denver later this year.

--Jerry Jones shouldn't speak. It just doesn't work out for him. He sat down with Bill Cowher for an interview on CBS' NFL Today, and the Cowboys owner defiantly stated that he is incredibly sensitive toward domestic violence. In the very next breath, he stated that domestic violence has been "a real, lifetime challenge" for Greg Hardy.

What did you just say? 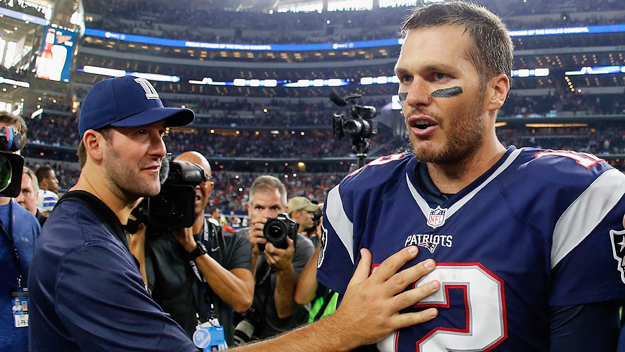 --Non-Patriots thought: Mike Francesa's reaction to this crying Mets fan legitimately made me laugh out loud.

"Geez. Glad I'm not spending the day with Will. That'd be a tough day."

On a side note, if Chase Utley is smart, he'll hire Jeffrey Kessler to represent him during his appeal. 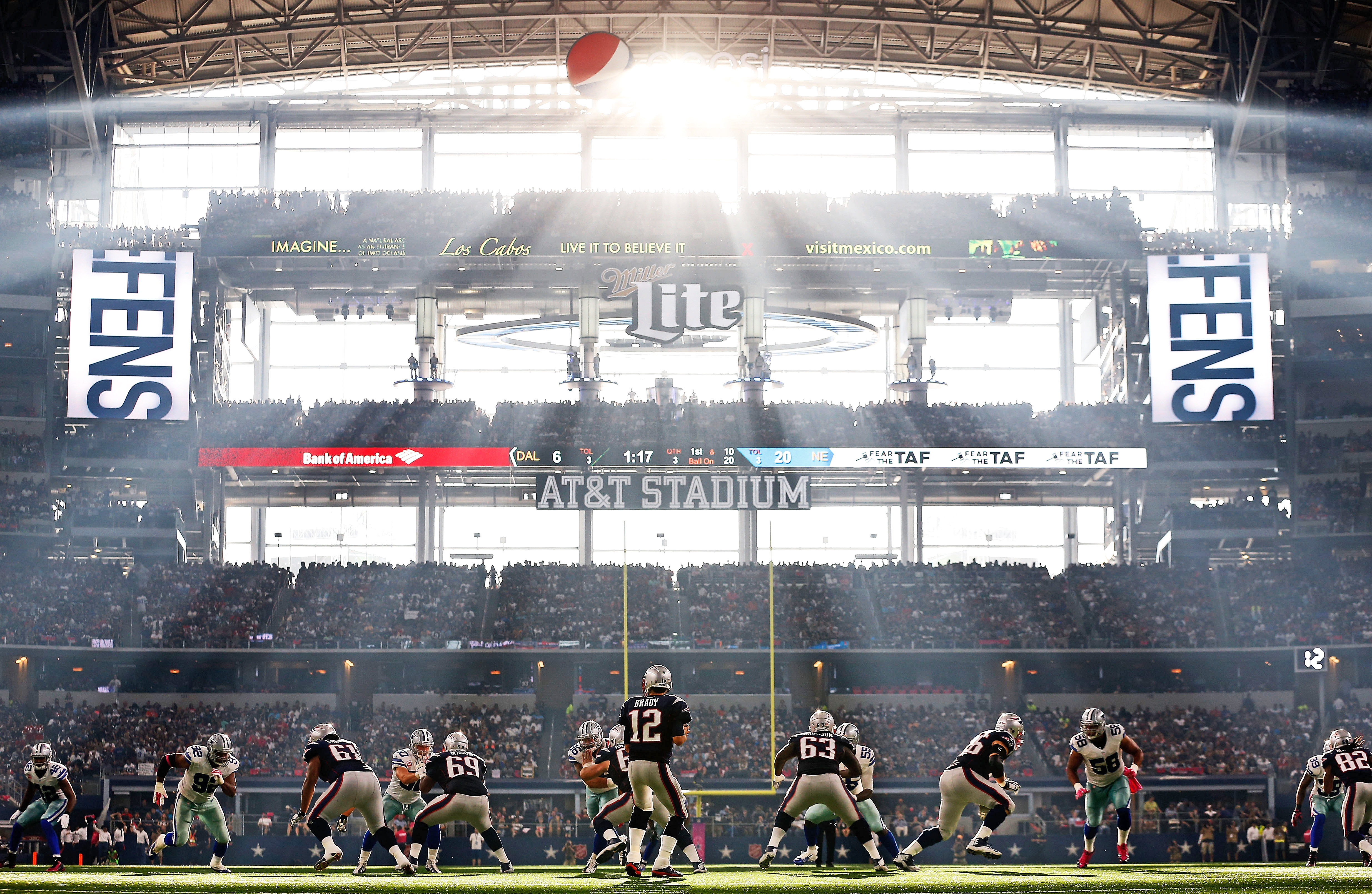 Tom Brady drops back to pass in Dallas. (Photo by Christian Petersen/Getty Images)

OK, that was fun. Now it's time for Colts week.