BOSTON (CBS) -- Look, the people who tweeted awful, despicable, disgusting, vile things about Curt Schilling's daughter deserve their punishment. The fact that they faced real-world consequences for their public buffoonery is a win for all decent humans in the world. In that regard, Schilling did the right thing. Let's start there.

But beyond that, the treatment of Schilling as some sort of modern-day pioneer of social media justice has gone a bit too far.

Schilling also happily noted that one of the people outed for their comments will have it "follow him around for the rest of his life. Stuff never goes away."

Here's what Schilling had to say about his vigilante justice in that Herald column:

"This could have ended way, way worse for a lot of them. What if my daughter had hung herself? I'm that Dad with nothing to lose at that point. If you look at Internet bullying ... nothing ever happens until somebody takes their life. And it's always the victim. Why wait for the victim to die? Why not just put these scumbags where they belong?"

He's right, in a sense, but isn't his over-the-top exposure of these people just another form of Internet bullying? Curt bragged to the Herald's Jessica Heslam that he's gotten people expelled from schools, kicked off their sports teams, and suspended indefinitely, and there are some who can expect to face some sort of legal action. In his own blog, he outed two individuals by name and the schools they attended, telling his readers, "I wanted to let you internet sleuths have a go. ... If you guys reading this that know how to find people on the 'net want to have at it, please do."

He chose to sic the hounds on them, but he said these people all are lucky that he resisted his first instinct, which was, according to Schilling's words in the Herald, to get in his car, find the tweeters, and "just beat the hell out of them."

Again, to reiterate, what the people said to Schilling was utterly repulsive. They deserve to face consequences. The world is better off every time a person faces consequences for being disgusting to another human being. But literally every single person to ever sign up for a Twitter account has been on the receiving end of some truly awful words. Curt has proven time and time again in his own social media dealings that he cannot properly compartmentalize the comments, that he can be obsessive, and that he will be rude to anyone who crosses him. So perhaps he may not be the face of social media justice.

Here's Curt responding to someone (account protected) with a strong stance on keyboard muscles:

Here's Curt responding to a teenager who didn't like what Schilling had to say on TV: 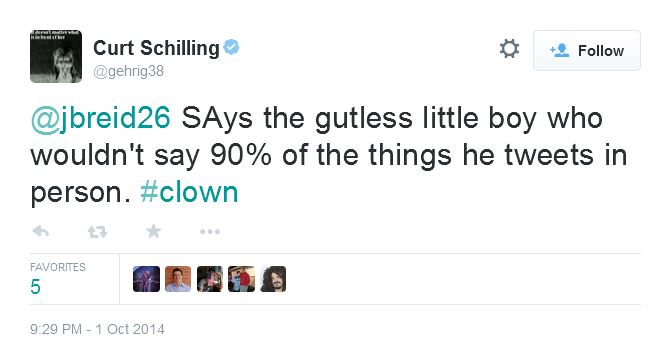 (Would Schilling have understood if that kid's dad felt like hopping in the car, tracking down Schilling and "beating the hell out of him"?)

Here's Curt not-so-calmly responding to someone (a jerk with a Twitter handle of "@Dirtbags21") who considers cortisone to be a performance-enabling drug:

We can't know what "@Stan_Dern" said to Schilling, because he deleted his account (it was most likely detestable), but here's Schilling threatening to find him, presumably to beat him up:

Obviously, the bankruptcy of 38 Studios remains a popular topic from Twitter users who want to bother Curt. Here, Curt responds by Googling information on people who criticize him for the failed video game venture:

(In his blog, Schilling actually wrote, "You want to rag me? You want to MF me about RI, about things I said when I played, about my congressional testimony in 2001? Go for it." He tried to pretend as though he would not care one bit if anyone commented on his 38 Studios failure, but his tweets prove this to be a very hypocritical statement.)

And here are some Schilling tweets that display his general behavior on Twitter:

Perhaps this whole thing could serve as a lesson for Schilling, who does not necessarily need to fight anybody and everybody who disagrees with him on the Internet.

Instead, he seems to be doubling down.

"I don't have issue going back and forth with keyboard cowboys and tough guys because they're small small people," he wrote on his blog Tuesday night, unaware of the humorous hypocrisy.

He also wrote this: "The boys that have gotten bad fallout from this. Do I feel bad? No. Do I sympathize? No. Whatever is their result is 100% on them."

Well, yes and no, Curt. They said awful things, and they're now in trouble for it. But Schilling himself raised a major issue of cyberbullying when he rhetorically asked the Herald, "What if my daughter had hung herself?" Now, following Schilling's crusade, if any of the people who have been publicly humiliated by a person of Schilling's stature end up suffering consequences that are disproportionate to what they wrote on the Internet, Schilling is putting it 100 percent on them. But he's also saying that he's pushing for a lifetime of punishment.

"This will follow them the rest of their lives, and for some of these guys, I'll make sure it does," he told CBS News. "You Google their names, these tweets are going to come up when you Google any of these names."

"It's not about fair," he replied. "This is my child. You attacked my child. The rules kind of go out the window when you attack family."

In his Tuesday blog, in a direct contradiction of his stance against the bullies, he reiterated his concern for the tragic effects cyberbullying can have:

"Young women, and men, are KILLING themselves after being cyber-bullied. You have a son, daughter, sister or brother? Niece, nephew, cousin? One that you would go to the ends of the earth for? Think about it for a second. Phone rings and that person has died, hung themselves because they were bullied. How are you doing? What's your reaction?"

He's right. He just doesn't realize that with his excessive efforts to bring these people down, he's just mimicking their behavior -- but with a much larger platform than a random person with 50 Twitter followers.

No matter what, Schilling will accept no responsibility for his own form of cyberbullying, thereby not necessarily making a terrible reality any better.