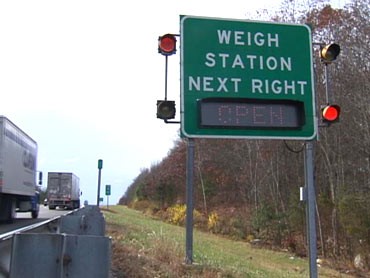 You've probably seen them as you drive the state's highways, but have you ever seen them open? There are a dozen weigh stations across Massachusetts, places where the police are supposed to weigh trucks to make sure they're safe.

But a lot of you, like Nealie from Lexington, went to our curiosity webpage to ask: "Why is every weigh station in Massachusetts always closed?"

David Wade went looking for an answer, and found a big cost.

As you pass state weigh stations you often see a lit sign reading "closed." You'll also see banged up gates, beat ups signs and barren blacktop. That's what Steve Gainer sees. "Every time you go by you see a bright sign that says closed!" he says. The state has 12 weigh stations. Steve regularly passes one of them, on Rt. 495. "I've never seen it open," he says.

We went to several rest stops and asked truckers about it. One said: "Nothing in Mass., I never see them open." Another agreed: "In Massachusetts, I haven't seen too many open." When we did find some action at a weigh station it was a single car, just parked. The driver told us: "I didn't know it was a weigh station. I thought it was a rest area!"

So why is it so rare to see a weigh station that's open? The State Police run the operations, so we asked. It turns out the truck team does weigh a lot of trucks. They say about 100,000 each year, collecting about $500,000 in fines. Sgt. Tom Fitzgerald says overweight trucks are a danger, and the weigh stations are vital.

"It's part of our enforcement mix. It's a tool that we need," he says. However the weigh stations aren't necessarily their sharpest tool. Trooper Brian McAnally works with the truck team. He says when truck drivers see the "open" sign for a weigh station; it's an invitation to get off the highway an exit early. "We don't get a lot of violations when we open the weigh stations. A lot of overweight trucks know we're here so they bypass us," says McAnally.

The equipment the truck team uses, computers and scales, are portable, allowing the troopers to set up shop anywhere there's adequate space. Since some trucks dodge the weigh stations, the team often does much better when it works in parking lots in commercial areas, rather than the actual weigh stations. But still, the weigh stations are there and they have to be maintained. That's the job of the state's Dept. of Transportation. That agency spent $107,000 last year for work like snow plowing, litter pickup and mowing.

The DOT agrees with the State Police that the weigh stations are a good value. But taxpayers like Steve Gainer would rather see the money used in other ways. "If it's only enough to fill one pothole, fill the pothole," he says.

On average the State Police truck team operates five weighing operations each week with a staff of 37.

What are you curious about? Go to wbztv.com/curious and let us know.

Make your voice heard. Click here to comment on this story and read comments left by others.