(CBS SF) -- Pacific Gas and Electric power lines and equipment failure are to blame for 12 of the catastrophic Northern California wildfires started in October 2017, according to the state Department of Forestry and Fire Protection.

The 2017 wildfire siege killed at least 44 people and destroyed about 9,000 structures. The fires burned at least 245,000 acres across Sonoma, Napa, Mendocino and other Northern California counties,

Two of the 12 wildfires cited killed 15 people. Cal Fire announced Friday that investigators determined the 12 fires were caused by electric power and distribution lines, conductors and the failure of power poles. In most cases, the cause was blamed on tree limbs coming into contact with power lines. In other instances, power conductors or other equipment toppling onto the ground sparked the fires, according to Cal Fire. 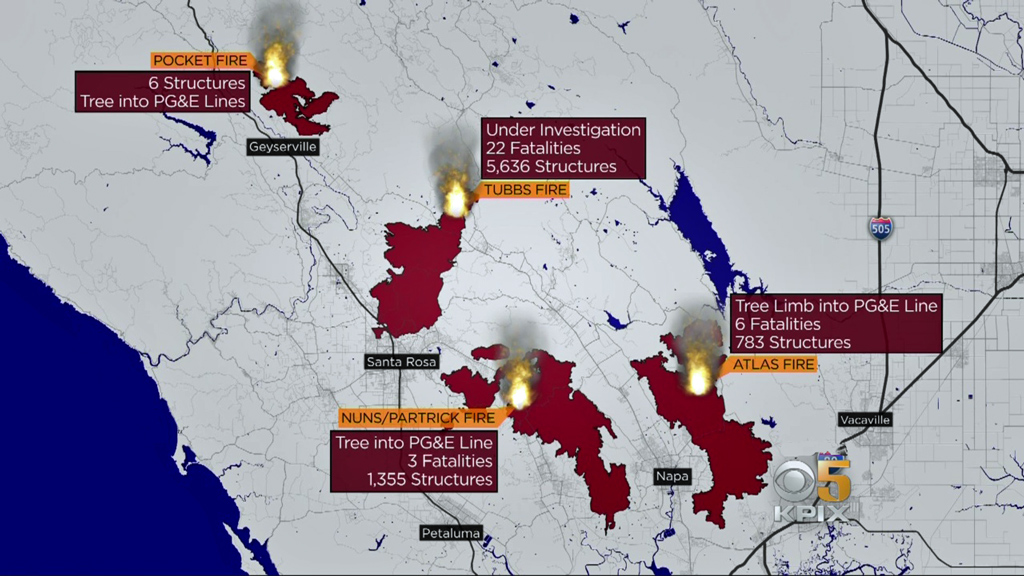 The investigation into the cause of the Tubbs Fire, in which 22 people were killed in Napa and Sonoma counties, has not yet been completed, Cal Fire Deputy Chief Scott A. McLean said.

The agency said in eight of the 12 wildfires – Sulphur, Blue, Norrbom, Partrick, Pythian, Adobe, Pocket and Atlas – the investigations have been referred to the county District Attorneys' offices for review due to evidence of alleged violations of state law.

"I'm calling on PG&E, utilities across the state, and the public utilities commission to step up and ensure they are meeting their legal obligations to maintain power lines in a safe manner, the statement read. "It's inexcusable and it can't be allowed to happen again."

In a statement, PG&E said in part, "The loss of life, homes and businesses in these extraordinary wildfires is simply heartbreaking, and we remain focused on helping communities recover and rebuild. We look forward to the opportunity to carefully review the CAL FIRE reports to understand the agency's perspectives. Based on the information we have so far, we continue to believe our overall programs met our state's high standards."

Cal Fire indicated three of the fires might have been prevented if PG&E had made more effort to keep trees clear of its power lines and turned those findings over to local prosecutors.

At the time, PG&E said in a statement: "Based on the information we have so far, we believe our overall programs met our state's high standards." The utility also said at the time it inspects and monitors every overhead electric transmission and distribution line at least once a year under its Vegetation Management Program.