PHILADELPHIA (CBS)—A Pennsylvania school administrator who was at the center of a controversy involving anti-abortion protesters has announced his resignation on Thursday.

Dr. Zach Ruff, who was Dean of Students at Downingtown-Area School District, was placed after video captured him have a confrontations between two teen anti-abortion activists protesting on a public sidewalk outside of the STEM Academy in Downingtown.

"I don't give a **** what you think Jesus tells me," Dr. Zach Ruff is heard saying in a cellphone footage recorded on April 21.

In the footage he yells, "I wish to protect my students from unsightly things that they don't need to see!"

"These children are being murdered in our society," said one protester to Ruff, who appears to be ordering the teens to leave.

Ruff responded with, "They're not children, they are cells!"

On Thursday, a spokesperson for the school said Ruff  announced his resignation:

"After considering this situation in total, its divisive impact on the community, the reaction from his students, and the attention this situation has garnered nationally, it is clear to us that Dr. Ruff decided that the best thing for his students, the School District, and the community was to resign from employment effective at the close of business on Thursday, May 11, 2017." 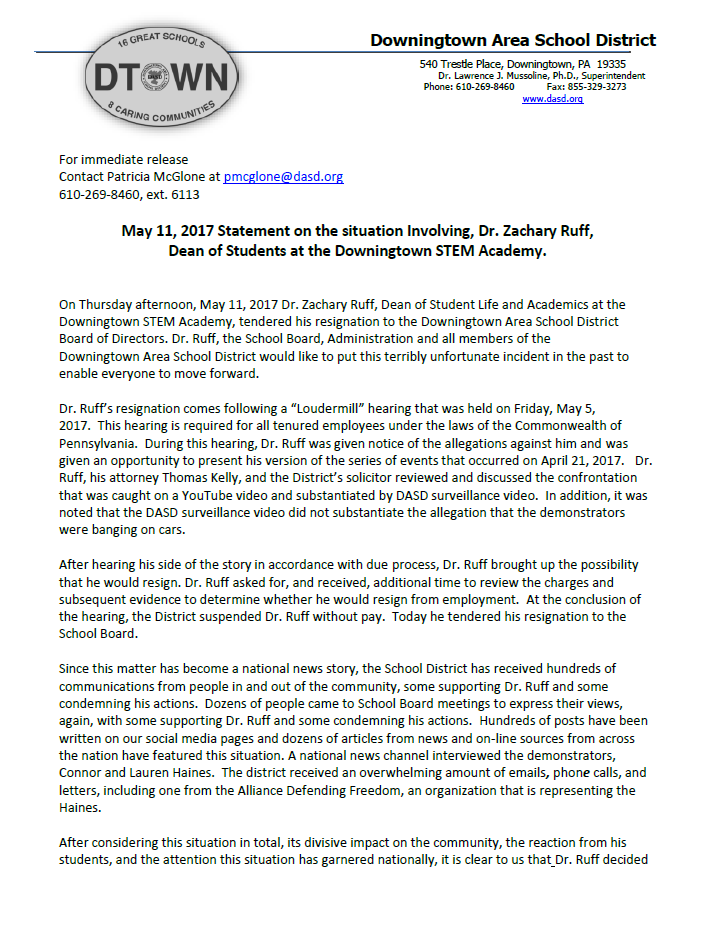 Last week, supporters of Ruff packed a school board room pleading to have  the beloved dean of students reinstated.

"The people that are attacking him on social media don't know him outside the context of a single video circulating on the internet," said one student.

If they dismiss him it is only fueling the fire of extremists who come here to destroy our community," said Emma Carr, a senior at STEM Academy.

Concerned parents and students say that the protesters were creating a dangerous situation and that Ruff responded with emotion.

A handful of residents disagreed.

"I personally, am pro-choice but what I really am pro first amendment. Those kids weren't hurting anybody."

Ultimately, Dr. Ruff felt that his actions was not representative of the person he prides himself of being.

"In reviewing the video, Dr. Ruff knew that the conduct he displayed was not representative of who he is and was not representative of the kind of educational leader he prided himself on being," school officials said. "Dr. Ruff has acknowledged that the demonstrators had a right to be on a public sidewalk. He acknowledged that his conduct cannot be defended or condoned and he deeply regretted his actions as displayed on the video."

The school says the two demonstrators had a right to be on a public sidewalk and a legal right to speak there as well.

"This school district will not interfere with the rights of anyone to express themselves, as those US Constitutional 1st Amendment rights are established in law," said the school spokesperson.