NEW YORK (CBSNewYork) -- The Derek Fisher era is over.

The Knicks fired the coach Monday after just a year and a half on the job. Here's a quick look at Fisher's tenure in the Big Apple.

2. The season was looking promising not so long ago.

Three weeks ago, New York was hovering around .500 and was soundly in the playoff hunt. But the Knicks have since lost nine of their last 10 games, including five straight, and now rank 12th in the Eastern Conference.

Fisher probably didn't do himself any favors by saying of his team after Sunday's loss to Denver: "Overall, it's a lack of readiness, mental or physical."

3. He was not the Knicks' first choice.

When the Knicks were looking for a coach in 2014, team president Phil Jackson initially zeroed in on another one of his former players, ex-Bull Steve Kerr. But Kerr picked the Golden State Warriors over the Knicks. While the Knicks find themselves again searching for a coach, the Warriors are defending champs and have the NBA's best record this season.

The Knicks were interested in hiring Fisher, an 18-year NBA veteran, even before he officially announced his retirement as a player. He eventually called it quits with the Oklahoma City Thunder and took the Knicks job. Fisher had played for Jackson with the Lakers, and his experience with the Zen Master's triangle offense was a major factor in landing the job.

5. Fisher was no stranger to the tabloids. 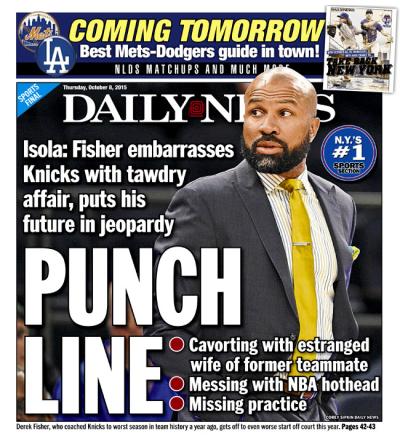 Perhaps the biggest fireworks Fisher created while Knicks coach came off the court in October. Fisher got into, according to the NBA, "a physical altercation" with former Lakers teammate Matt Barnes while at a gathering at the California home of Barnes' estranged wife, Gloria Govan. According to reports, Barnes was upset that Fisher, his onetime friend, was romancing his ex.