Jason Aldean fans traveled far and wide to see him perform live at Ed Sullivan Theater last night. Some even waited upwards to five hours for his hour-long concert, which is part of the Live on Letterman concert series. And for those fans--and everyone else watching online via live stream last night--he didn’t disappoint.

Jason’s 12-song set spanned his entire catalog, and it even included three new tracks from his upcoming October release, Night Train. While he had only played the tracks once before, his “practice” last night was much to the enjoyment of his fans, many whom were hearing the songs for the very first time.

“I guess we do have a few country music fans in New York City. Good to know!” Jason remarked after the reception behind his energetic first track of the night, “Crazy Town.”

“We got a brand new album coming out here in about a month or so," he continued. "This will be our fifth album, so tonight we’re going to play you guys some songs from all five of the albums, including the brand new one that’s coming out. We want you to have fun and get as crazy as you want to.”

And that they did. 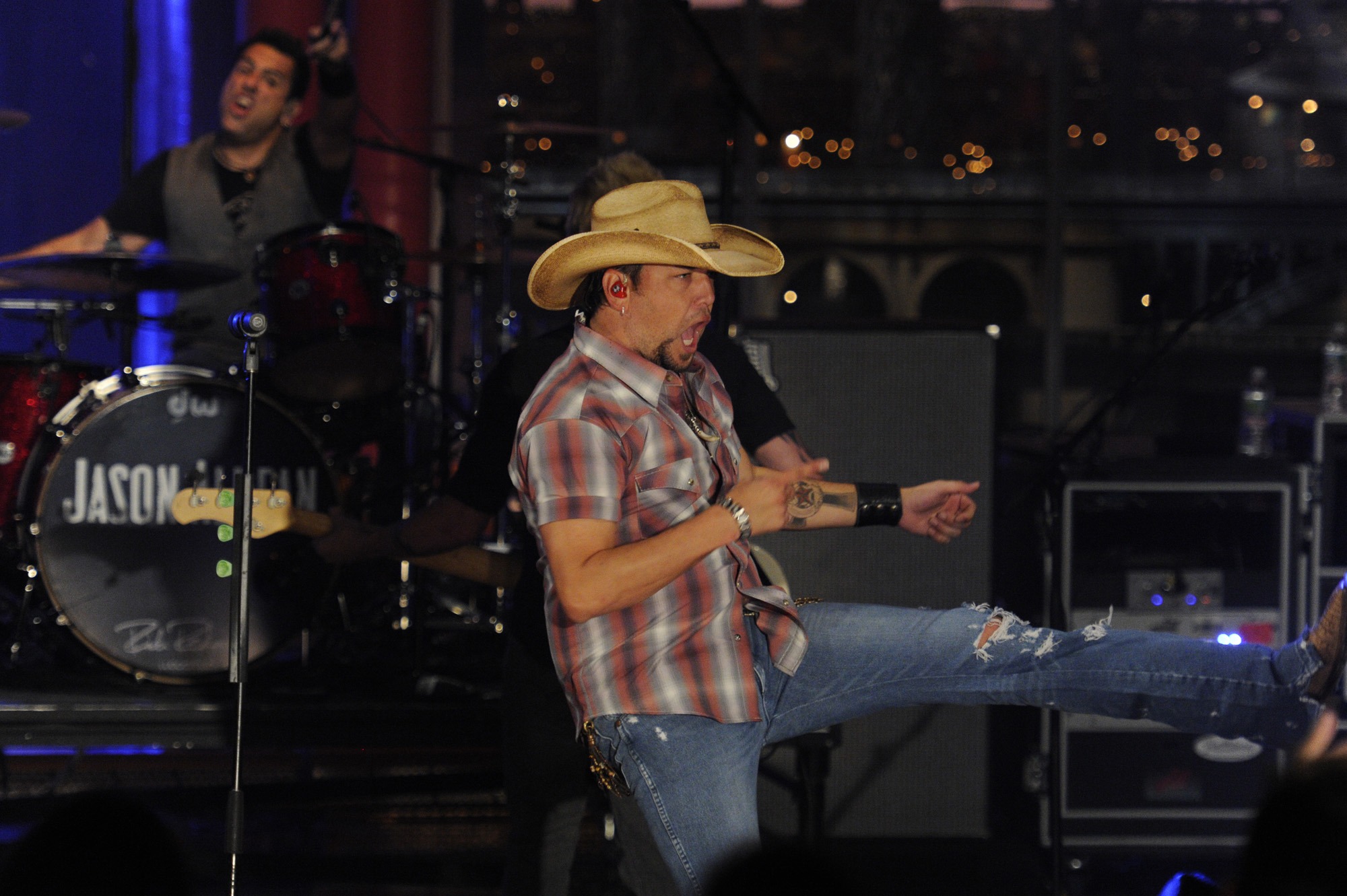 While older tracks like “Amarillo Sky,” “Big Green Tractor” and “Tattoos On This Town” impressed, it was the livelier “My Kinda Party”--a song Jason said changed his career--and “Dirt Road Anthem” that got the most screams.

“When I got started into the country music business, I never thought that I would be somewhat of a hip-hop artist, too, but it happened,” he admitted before he introduced “Dirt Road Anthem.” “Unfortunately I don’t have Ludacris here with me tonight...I don’t know if you guys have heard that version or not, but it’s pretty cool. Thank you guys for making this a big ol’ hit for us.” With electrifying guitar solos, memorable pedal steel, and rapid-fire lyrics, he energized the crowd, who rapped right along with him.

The Ed Sullivan Theater (home to The Late Show With David Letterman) is a much smaller venue than Jason is used to playing these days, and it created an experience that Jason said took him back to his club days. 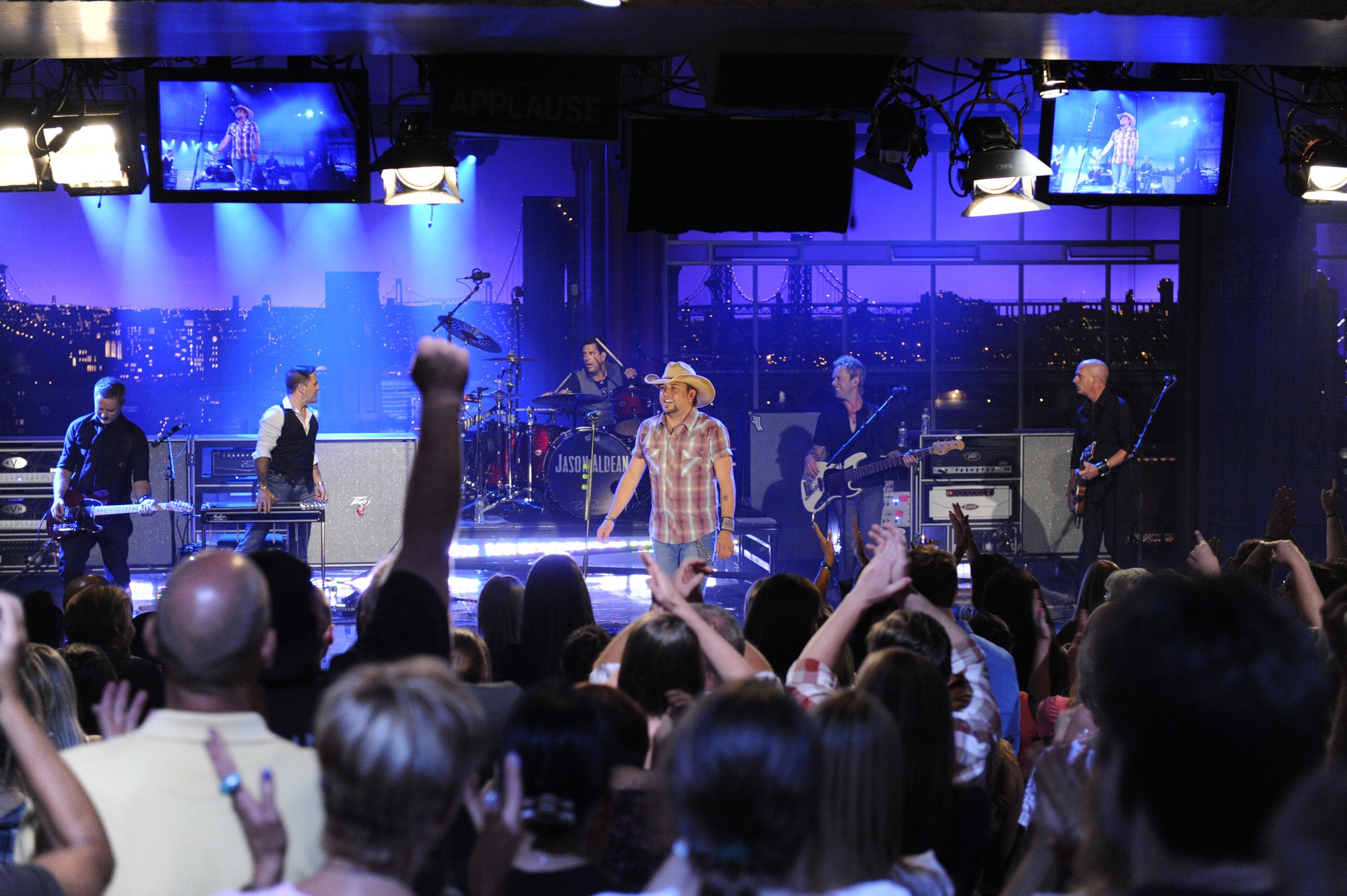 The set list of course included a song that was Jason's most recent Number One hit. “One of my favorite songs from My Kinda Party was also one of the songs I fell in love with the first time I heard it,” Jason said of “Fly Over States.” With ear-grabbing guitar and sentimental lyrics it was easy to hear why.

Throughout the night fans sang along on every song, and though they didn’t know some of the newer tracks, Jason continued to captivate. During his introduction of the title track to his upcoming album, Night Train, Jason admitted he'd only played the song one other time. A slower ballad with heart-pounding percussion and plenty of soul, Jason’s vocals impressed.

Another new track, “Wheels Rollin’,” also left an impact. A fan of Bon Jovi and Bob Seger, Jason told the story behind the song and how his desire was to have his own song about life on the road like Bon Jovi's “Dead or Alive” and Seger's “Turn the Page.”

“I think it’s going to be a really cool song on this new album," he said. "It talks about being on the road, being an artist and some of the things that go on and how your life is. I hope you guys dig it.” Easy to envision in an arena setting, he got his point across on the anthemic track. 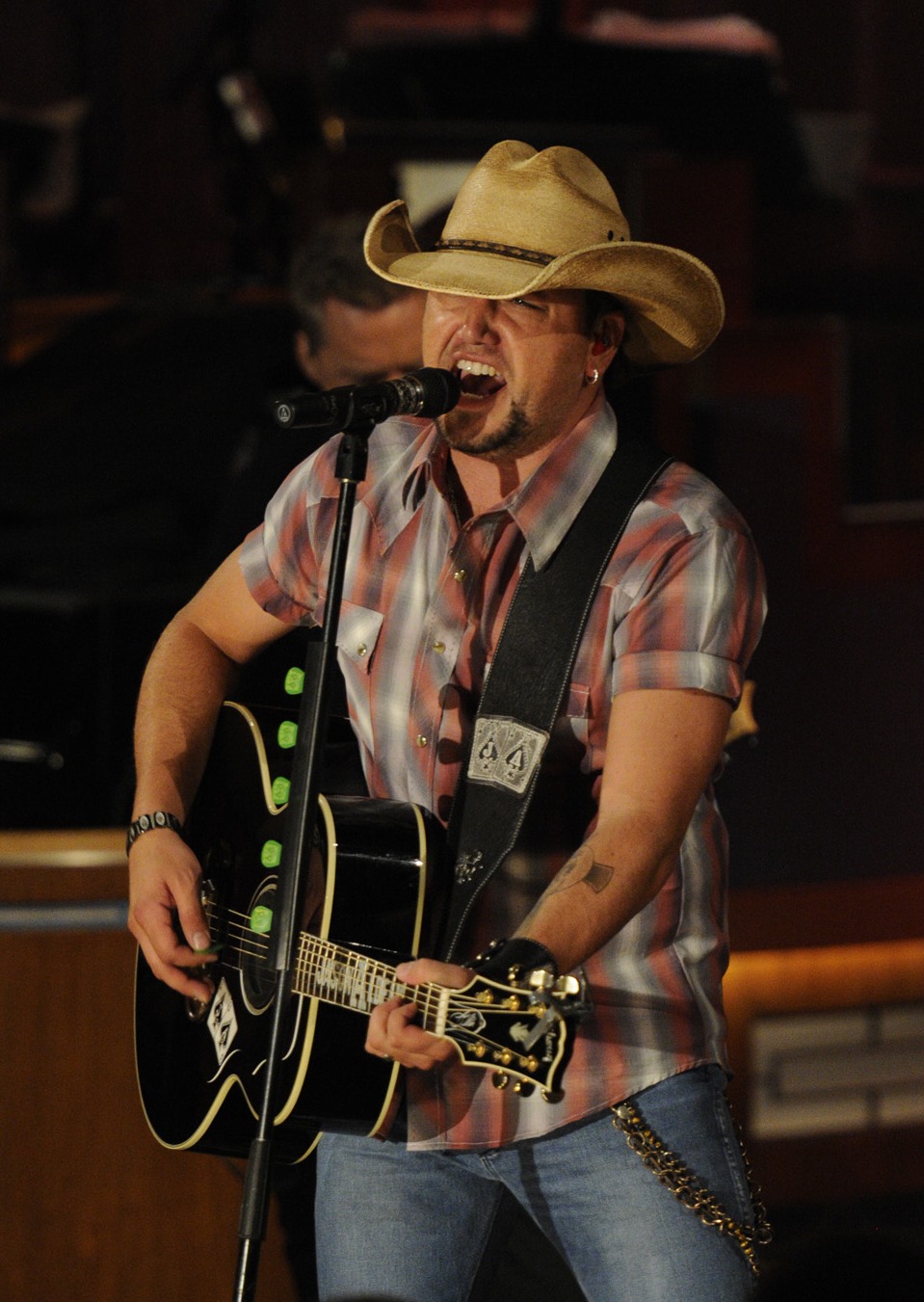 Jason Aldean ended the night with two of his signature hits, “She’s Country” and “Hicktown,” as the audience sang along word for word.

As he closed his set he thanked the fans for all their support since his very first single ("Hicktown") in 2005. Recalling the day the track was released, Jason admitted, "I've never been that scared in my life. Thank you for being here tonight and giving your support since 2005. It's been a pretty amazing ride."

If his three new tracks are any indication, Jason has a much longer ride ahead of him.