Nick Cannon left Mariah and dembabies in  New York, while he attended the Google Music Launch party in Los Angeles  on Wednesday.  Come Thursday morning Nick was probably missing the walkable streets of NYC.  Cannon took to Twitter to complain about being racially profiled by police, an occurence that Nick says he has all the time in Los Angeles.

Apparently one Tweet wasn't enough to get the incident out of his system, Cannon kept Tweeting about his lifelong dislike of police. 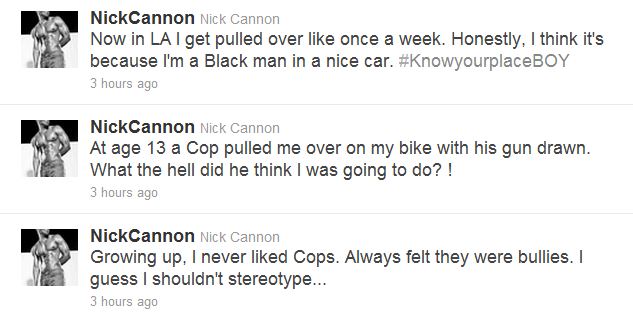 The LAPD used Twitter to advantages last July when it asked celebrities to Tweet their followers, requesting people to  avoid the 405 Freeway during a scheduled maintenance period affectionately referred to as "Carmageddon."   While Carmegeddon turned out alright, they may have to start their own Twitter account now to do some damage control.

Nick come on back to New York, it's harder to pull people over on the subway.