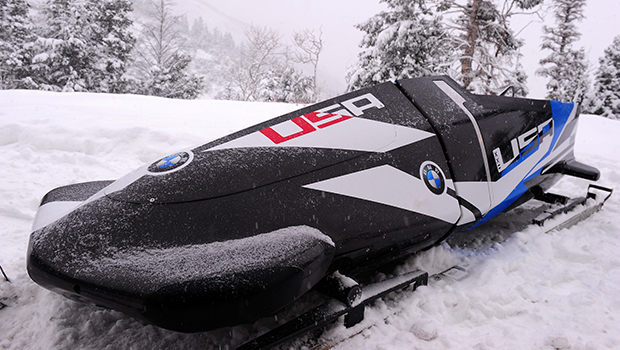 Michael Scully knew he wouldn't fully grasp the sport of bobsled until he experienced it for himself. The creative director of BMW Designworks USA, Scully is among a group of world-class engineers that the U.S. Olympic sliding teams – luge, bobsled and skeleton – tapped to help overhaul their equipment.

A champion on the car-racing circuit, Scully thought he could handle a bobsled run. As they stepped to the frozen track, bathed in white lights amidst an otherwise pitch-black night in late 2011, Scully held his camera up over his head.

Steven Holcomb, the pilot who had steered the four-man bobsled team to gold in Vancouver, laughed at him. You’re going to want to put that down, he advised.

By the time they reached the first corner, Scully had heeded Holcomb’s advice.

“The level of force, it was so incredible that you end up with your head between your knees as far as you can go,” he recalls. “It’s absolute chaos to get to the bottom, a level of force and vibration and violence that I was incredibly taken aback by.”

It was these chaotic moments that helped shape the sled that Team USA will drive at the 2014 Winter Olympics in Sochi, Russia.

Early success did not last

The last time the U.S. won a two-man bobsled gold medal, Franklin Delano Roosevelt was serving his first presidential term. It’s been more than a decade since America took gold in the skeleton, and the country has never won in men's or women's luge.

Team officials believe the lack of success has more to do with science than skill. As other countries have invested in innovation – Japan’s bobsled team works with a Formula One team, Germany works with Ferrari, the U.K. works with McLaren -- the U.S. has continued to race in old equipment. The luge sleds used in 2010 were nearly 15 years old. The skeleton sleds were at least 12 years old.

So ahead of the 2010 Games in Vancouver, the U.S. bobsled team partnered with the aerodynamics engineering company Exa Corporation and the Bo-Dyn Bobsled Project, run by a NASCAR driver, to redesign the four-man bobsled. That year, racing in the “Night Train 2,” the four-man crew won the country’s first men’s bobsled gold medal in 86 years.

There was no denying that innovation makes a difference.

And so this year -- thanks to top engineering talent armed with computational fluid dynamics, motion capture technology, 3D modeling, wind-tunnel testing, and countless test runs -- all three teams are heading to Sochi with state-of-the-art sleds.

"We wanted a sled that will be as fast as the fastest in the world, so our athletes don’t have to worry about equipment,” says U.S. Bobsled and Skeleton Federation CEO Darrin Steele, speaking about the new two-man sled.

Ice conditions vary based on altitude, temperature, and time of day. As athletes hurtle down the icy track, the sleds are fighting gravity, friction, drag (air resistance), vibration and g-force. The way these forces interact determines how quickly the racers reach the finish line. When there’s less drag, they go faster. Less vibration helps the athletes see the track better, because their heads aren't bouncing around as much. Winning athletes are able to steer with precision, maintaining speeds of 80 to 90 m.p.h. as they go from straightaways to curves.

After testing two prototype bobsleds, BMW Designworks presented the final result in October 2013: a significantly smaller, more aerodynamic design. Using lighter materials like carbon fiber freed up about 15 pounds. The engineers had to add the weight back to the sled to meet the 374-pound minimum weight requirement, but they were able to place the pounds more strategically, shifting the center of gravity and improving the steering.

From his chaotic test run, Scully also understood first-hand that the athletes need to be able to brace themselves. The new sled offers multiple hand positions so that the brakeman and pilot can adjust their positioning at different parts of the course.

Materials make all the difference

From 2007 to 2011, Dow tested more than 20 material combinations as it sought to shave thousandths of a second off of Team USA’s luge times.

“By choosing the correct materials, we can influence the sled speed, vibration, smoothness, and steering ability,” says Dow research scientist Jay Tudor. Tudor and Burr would not reveal the exact details of the final composition, but said the main material is carbon fiber.

Once the materials were narrowed down, the sled – and the athletes – underwent hours of wind tunnel testing, which helps researchers understand how air travels over the athletes at different points of the race. They also used smoke to visualize the airflow.

The skeleton athletes also took their turn in a wind tunnel to test the new ProtoStar V5 sled.

“That was quite an experience," says team member Matt Antoine. “There is a lot of science that goes into it. Even if we’re only finding a couple of hundredths here or there, it makes a huge difference.”

The group from ProtoStar Engineering worked with the company Machine Tek to determine the best materials, looking to build a sled that was lightweight and flexible on curves yet stiff enough that the frame wouldn't bend under forces upwards of 4 or 5G -- the equivalent of 600 pounds.

Project lead Grant Schaffer says they ended up with "high-performing steels that are within the regulation of the competition but more exotic than typical steel you’d buy off the shelf." (Like Scully, Schaffer and two fellow ProtoStar engineers took a test run in Lake Placid in order to understand the task at hand. Schaffer describes it as "completely out of control and properly terrifying.")

And yet, when they tested the final result, the athletes weren’t all that impressed. “The way we had them set up, we really weren’t picking up speed down the track,” says Antoine.

The engineers had done such a good job of reducing vibration that they ended up with a sled that actually accumulated more drag, which slows the racers down. So they backtracked a bit, to a version that has slightly more vibration but less drag.

They also changed the carbon fiber pod (the area that holds the athlete's body) and tested the aerodynamics again, this time with computer simulations.

The adjustments worked: Antoine won his first race ever on the new 75-pound sled, at the World Cup event in Lake Placid on December 13.

“Skeleton is 90 percent mental, so the athletes need to feel like they have great equipment under them, they have great coaching -- all the pieces of the puzzle,” says coach Tuffy Latour. “This is one of the most important pieces, that we didn’t have two years ago.”

“It’s really putting them in position to be medal contenders each and every race,” he adds. “It’s really, really encouraging.”

Scully believes the new two-man bobsled design has significantly quieted the chaos. Just how much, he can’t personally say -- he turned down the chance to test out the new sled, having had enough chaos the first time around.

As for whether all this engineering work will result in Olympic gold, the coaches and engineers agree that it still comes down to the athletes in the end. But so far, all three teams have seen more success than ever in the World Cup races. Steve Holcomb’s two-man bobsled team is the gold-medal favorite after winning the overall two-man World Cup series title.

“Our chances are as good as they’ve ever been in the modern era," says Steele. "But I’ve been around long enough to know that you never predict what is going to happen at the Olympic Games. On any given day, anything can happen. But, that said, I like our chances.”