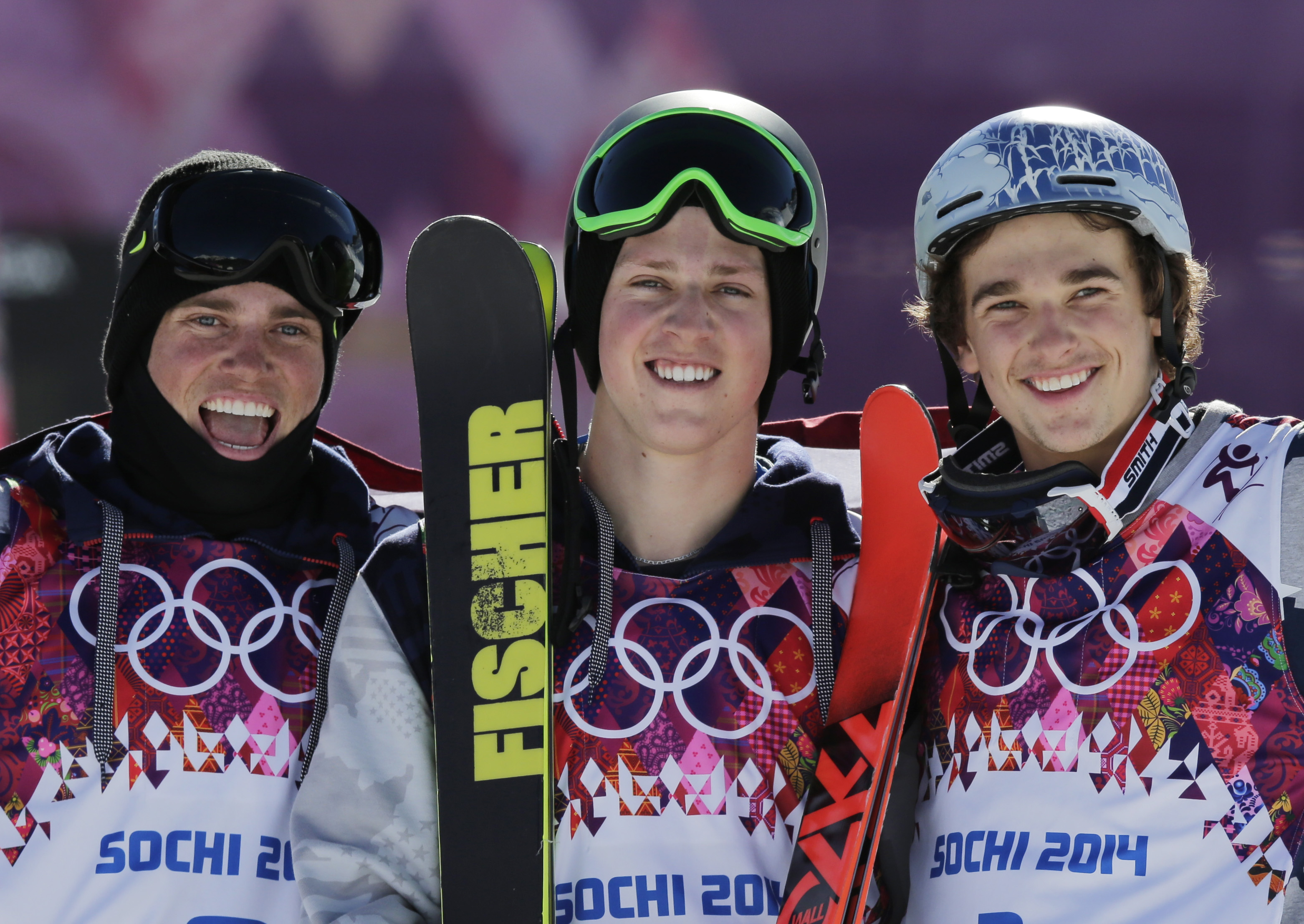 KRASNAYA POLYANA, Russia -- The U.S. has swept the podium in men's slopestyle skiing.

Joss Christensen soared to gold in the sport's Olympic debut, posting a score of 95.80 on Thursday to beat teammates Gus Kenworthy and Nick Goepper.

The gold was the fourth for the U.S. at the Sochi Winter Games, all won on the slopes of the Rosa Khutor Extreme Park.

"I am shocked," Christensen said. "I am stoked to be up here with my friends. America, we did it."

In conditions better suited for a spring break in the mountains than the Winter Olympics, the 22-year-old Christensen was by far the best. Each of his four runs scored in the 90s. His first run in the finals won the gold, and his second would have been good enough to win silver.

The sweep is the third for the U.S. in Winter Olympic history, joining men's figure skating in 1956 and men's halfpipe snowboarding in 2002.

"It's the kind of thing you don't even let yourself think about," U.S. coach Skogen Sprang said. "I still don't believe it happened."

While the U.S. has struggled elsewhere in Sochi, things are just fine at the Extreme Park, which was so warm on Thursday that American Bobby Brown, who finished ninth, completed his final run in short sleeves.

The three medals gave the U.S. five in the span of 15 hours. Snowboarders Kaitlyn Farrington and Kelly Clark took gold and bronze in the women's halfpipe on Wednesday night.

Christensen, from Park City, Utah, hardly seemed intimidated as his sport was thrust into the mainstream for the first time. The final skier named to the U.S. slopestyle team, he threw down four practically flawless runs over the series of rails and jumps that are the equivalent of a skier's playground.

He led qualifying and insisted he had plenty left for the finals.

Christensen's three off-axis jumps at the end of his first qualifying run totaled 10 full spins in the span of 15 seconds - all coming while he skied over the ramp backward.

The rest of the 12-skier field took aim in the second run of the finals, but none could top the kid with the floppy blonde hair and easy smile that seems to embody a sport that often looks like it's just a bunch of skiers taking turns showing off.

Kenworthy, from Telluride, Colo., was already planning to head back home with at least one of the stray dogs that call the streets of Sochi home. Now they'll have some company - a silver medal. He raised his arms over his head after his second finals run and busted out laughing when his score of 93.60 was revealed.

Goepper, the gold medal favorite from Lawrenceburg, Ind., dropped a 92.40 during his first finals run but couldn't top it in the second as the pressure mounted. He smacked his skis against the second rail feature, ending his chance of leapfrogging Christensen.

"I feel amazing," Goepper said. "I think today was the best display of skiing we have ever seen in our sport, so I am so happy."

Only Norway's Andreas Haatveit could break the U.S.'s grip on the podium. While his last trip was slick, he seemed to know he would come up short he crossed the finish line. Haatveit put his hands together as if to pray, then shrugged and gave the Americans a push when he ended up fourth.

With gold assured, Christensen put on one last show instead of taking a simple victory stroll down the mountain. Twisting and flipping his way to his teammates, he pumped his arms in celebration. When his score - immaterial as far as the medals go, but still the second-highest of the day - was posted, Goepper and Kenworthy hoisted him on their shoulders.