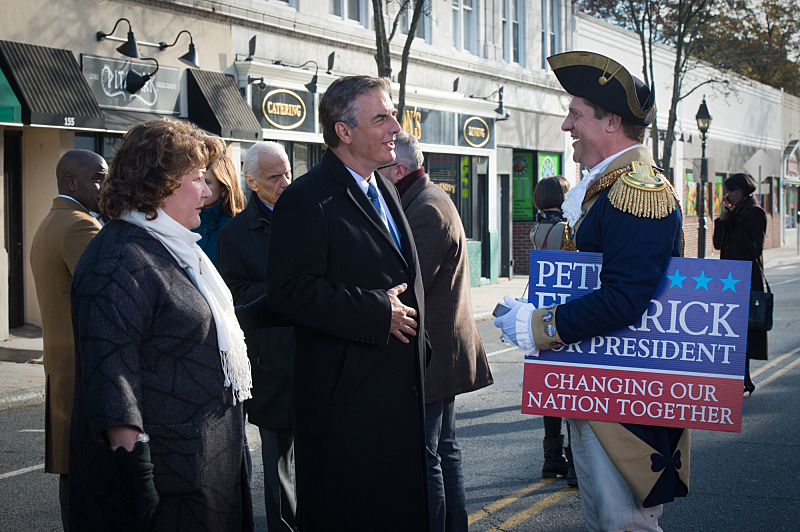 Warning: spoilers ahead (for "The Good Wife," not the Iowa caucuses)

If the writers of "The Good Wife" are any good at predicting the future, Hillary Clinton is going to have a big night when Iowans caucus for their Democratic presidential nominee on Feb. 1.

The CBS show portrayed a fictional version of the caucus in Sunday's episode, "Iowa." One of the show's main characters, the fictional Illinois Gov. Peter Florrick, is running for president - but his competition is made up of real-life candidates Hillary Clinton, Bernie Sanders and Martin O'Malley.

The show portrays the final days of Florrick's campaign, when he is attempting to pull off a "full Grassley." Nicknamed for Iowa Sen. Chuck Grassley, who travels the entire state annually, candidates must visit all 99 of Iowa's counties. Former Pennsylvania Sen. Rick Santorum was the first candidate to do so during the 2012 election, and he ultimately eked out a win in the caucus.

Santorum has repeated the full Grassley for his campaign this cycle, along with former Arkansas Gov. Mike Huckabee. Neither has seen their efforts translate into support: Santorum hasn't cracked 2 percent in an Iowa poll since September, and Huckabee is also mired in the low single digits.

On caucus night, members of the Florrick family show up to rally supporters at the 79th precinct in Polk County, only to find that none of the 30 supporters who promised to be there have shown up. The voters are angry with Florrick (some because he was caught on video spitting out a bite of his "loose meat" sandwich, a local delicacy he consumed at multiple campaign stops), and they must scramble to pick up enough supporters to avoid being disqualified at the caucus site.

They find 29 supporters and nearly fail the "viability" test, but are saved at the last minute by the energy of a singing supporter who has tracked them throughout the state in his Revolutionary War garb (the character, played by Broadway star Chistopher Sieber, calls himself a "Florrick fanatic").

Back on the campaign bus later that night, the Florrick family gets some good news: Peter Florrick won the precinct his family visited with 123 votes, a 79-vote margin. "That's quite an upset for Hillary," says Chris Matthews, who is anchoring a fictional local TV station called WEQT9.

Alas, they find out moments later that it wasn't a telling moment. Peter Florrick places "a very distant fourth," winning just four of Iowa's 99 counties: Polk County, and the last three counties he visited during his "full Grassley" tour (Sioux, Plymouth and Woodbury).

In real life, the Iowa race is much tighter three weeks before the caucus. An NBC/Wall Street Journal/Marist survey released Sunday shows that among likely Iowa Democratic caucus-goers, Clinton edging out Sanders by just three points, 48 percent to 45 percent -- a lead within the poll's margin of error of 4.8 percentage points. O'Malley comes in with five percent support.

He would likely be happy to win 17 counties come Feb. 1.