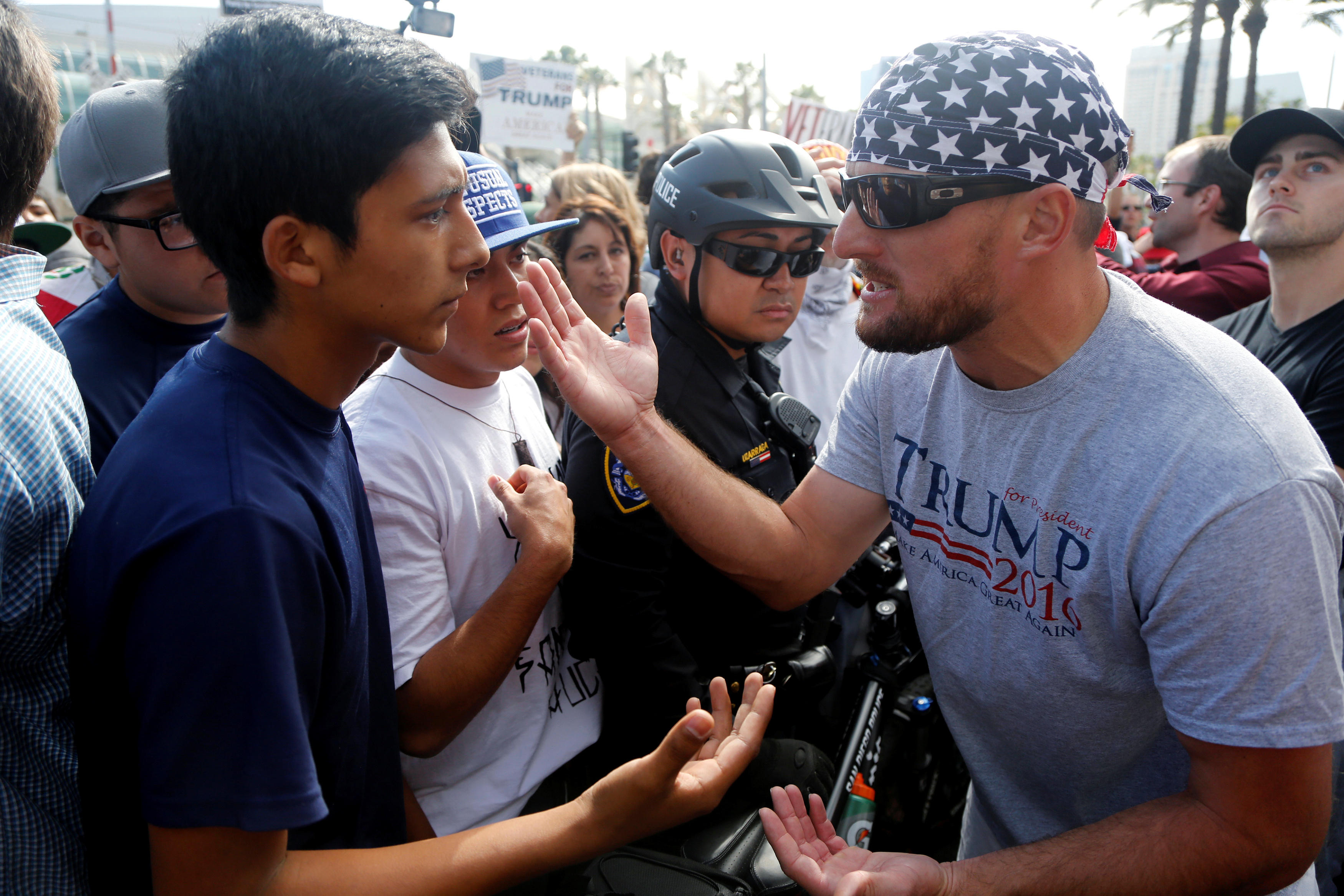 The battle for Ohio in 2016 isn’t just the same old campaign to win the hearts and minds of voters in America’s swingiest swing state.

Ohioans are considering very two different and polarizing personalities and their visions of what America is supposed to be – and there is ample evidence to support the theories of both Hillary Clinton and Donald Trump in the Buckeye State.

The economic news here is mixed. Depending on where you stand, Ohio is the embodiment of a prospering and young looking post-industrial economy, or the shriveled husk of what American greatness used to look like.

According to a report released at the start of September by Policy Matters Ohio, a Cleveland based non-profit group, wages are rising and the unemployment rate is lower than it was prior to the recession. But labor force participation is at an all time low, concentrated pockets of high unemployment remain, and “inequality is staggering, both within and between counties in Ohio.”

Many of those suburbanites are typically Republican voters. But the state’s economic situation, combined with Trump’s blue-collar appeal, may have flipped the script.

“Without getting too psychoanalytical, when people are losing hope and frustrated, it’s easier to make an emotional connection with them,” Tim Burga, the president of Ohio’s AFL-CIO told CBS News.

“And Trump’s done that by saying outlandish things about foreign countries, different races, countries and sexes and some of that may appeal to people who are down and out and desperate. It’s easy to hit those nerves when you’ve lost your job and your wages are half of what they used to be.”

This could prove to be a problem for Democrats, who have long relied on lower-income voters to win races in the state. A Bloomberg and CNN/ORC poll released on Wednesday shows Trump running five points ahead of Clinton.

“Trump’s message about the system being rigged and bad trade deals really appeals to them because their lives have not gotten better and then throw in the tragedy of heroin addiction — economically and culturally they feel the pain,” Ohio Secretary of State Jon Husted, a Republican, said.

The businessman might have an advantage right now but it’s not as strong as some Republican candidates who have kept a traditional GOP coalition. Bloomberg’s poll shows incumbent Senator Rob Portman​ leading his Democratic opponent, Ted Strickland, by 17 points. Portman has held Trump at arm’s length throughout his campaign and closely aligned himself with popular sitting Governor John Kasich, who has not endorsed Trump​.

A contrast to Kasich’s economic message, Trump has painted a bleak picture of Ohio’s economy with a broad brush. But when it comes to how exactly he plans to revitalize blighted communities left behind by the new economy, details are spotty and scant.

The Republican nominee delivered a speech on “America’s Economic Independence” at the end of June in front of a fittingly apocalyptic heap of crushed aluminum cans in Pittsburgh. He pledged to restore factory jobs through trade reform, tax cuts and deregulation, but critics on both sides of the aisle say his plan would not restore jobs and could weaken the economy.

Trump has appealed most explicitly to the heartstrings of the Rust Belt and Appalachia, where the poverty rate of 17.8 percent is two percentage points higher than the average of the rest of the state, with this promise to bring back coal mining and steel jobs -- industries that have been hemorrhaging jobs since the 1980s.

However, he has yet to explain how he intends on bringing back jobs in a market where coal is not expected to make a recovery because of a declining supply and declining prices of natural gas and renewable energy.The only details he’s provided are calls to reform the Environmental Protection Agency’s Clean Power Plan and the Department of Interior’s moratorium on coal mining permits.

Her plan calls for $30 billion dollars to revitalize coal communities through investing in infrastructure, healthcare, education and retraining, which her allies say would help transition communities to the modern economy. But what the blueprint has in detail, it may lack in support.

Clinton’s optimistic tone and game-plan have been met with a snarl from frustrated voters desperate for change and skeptical of government and politicians. Republicans and Democrats alike, all throughout the state, are quick to quote a remark she made in May that’s repeatedly come back to haunt her: “We’re going to put a lot of coal miners and coal companies out of business.”​

“I was brought up that Democrats were for the working people and they are not anymore,” said Kenneth Calhoun, a retired Air Force Reserve Master Sgt from Youngstown, Ohio who registered as a Republican in order to vote for Trump. “They are for the rich people and the special interests and changing this country the way they want. Well, that’s not the country I grew up in.”

Clinton supporters also say sexism is a factor this year. SunCoke employee Tanika Lewis of Portsmouth, Ohio is a member of United Steel Workers Political Action Committee and is working to elect Clinton.  She says the biggest barrier to winning over her peers and neighbors is that the Democratic nominee is a woman.

“They know that Hillary is qualified but they are not going to vote for her because she’s a female,” said Lewis. “And I’m a union worker, she’s for unions and Trump is not.”

The Buckeye State has only voted once for a losing candidate since 1944 (Ohioians voted for Richard Nixon in the 1960 election won by John F. Kennedy). However, this election could be the second as Clinton is outperforming national polls in battlegrounds such as Pennsylvania, Colorado and Virginia making Ohio less important to her electoral path.

The projected demographic breakdown of Ohio voters provides fertile ground for Trump’s message: non-college educated white voters consist of 41.8 percent of the vote, more than any other battleground, according to the Cook Political Report.Burga, the AFL-CIO leader, maintains that as Trump’s record and rhetoric become better known to voters, blue collar and union support of Trump will drop.

In the meantime, Democrats are working hard to make inroads in traditional Republican strongholds, such affluent counties with large voting blocs of college-educated whites. They’re betting voters there, particularly women, won’t be able to stomach Trump.

“There is a good economic story in Ohio and that benefits Clinton with certain higher skilled voters,” said Green, the political scientist.

Historically, Democrats have won densely populated cities in Ohio while Republicans have won the metro-areas surrounding them. Those GOP-friendly areas tend to have some of the lowest poverty rates in the state, and are therefore perhaps resistant to Trump’s doom-and-gloom message.

“In these counties around big cities that are growing with high median income, how open are those voters going to be to picking a candidate of radical change versus continuity with Clinton?,” said Kyle Kondik, managing editor of Larry Sabato’s Crystal Ball, which tracks voter data. “They probably don’t like Obama all that much, but their own personal financial situation is just fine and they don’t want to roll the dice​.”

The Democrats’ organizational advantage over Trump in the state has been well documented -- and in a tight, unpredictable race with depressed enthusiasm, a ground game can make all the difference.

When former President Bill Clinton made a surprise visit to a Cincinnati field office last week on Labor Day, three women excitedly greeted him, introducing themselves as the women who had flipped Hamilton County, a county in the Southwest corner of Ohio right outside of Cincinnati, for Obama. George W. Bush had won the area in 2004.

They were working hard to do it again for Clinton, they told him.

Despite their hopes, however, Clinton does struggle with an enthusiasm gap, especially among groups that have not benefitted from Ohio’s economic recovery, such as African Americans and young voters, who helped put President Obama over the top against Mitt Romney in 2012. Still, Democrats hope their organizational efforts, along with resistance to Trump among Republicans, will prove decisive.

“Ohio is where you gotta go in and grab your voters,” said Michael Hartley, a Republican consultant and Bush’s political director in Ohio in 2004.

“In 2004, we got every Republican we could possible find and we got them out to vote. In 2012, the incumbent president was not super popular but they were able to go in and get every single Democrat to vote. The electorate is so malleable right now – they’re pissed off.”