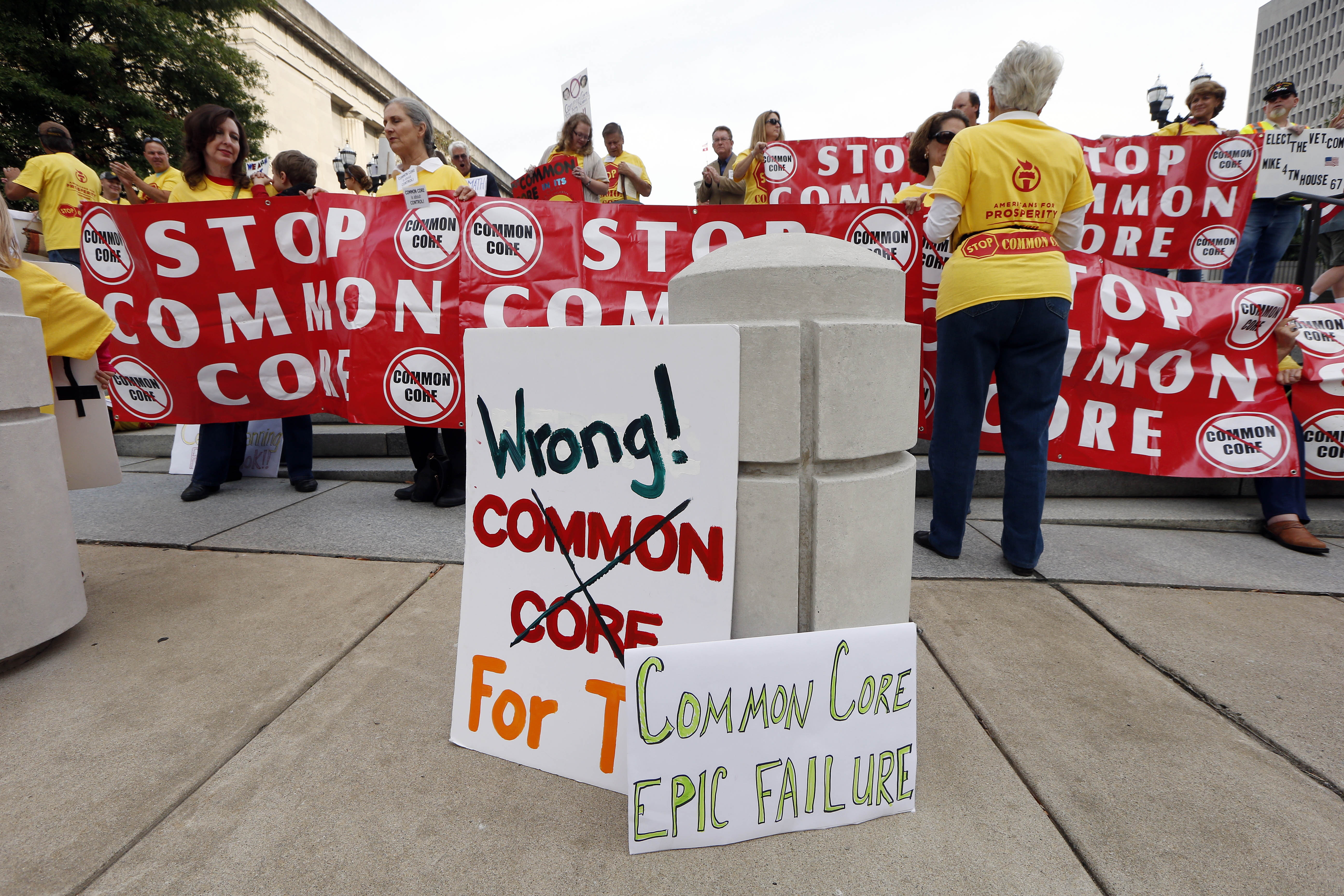 Common Core education standards are riling the conservative base, and as the 2016 Republican presidential field takes shape, the standards -- seen by right wing activists as a federal overreach and a threat to parental rights -- are poised to play a big role in the GOP nominating process.

"Voters are very closely viewing it as a litmus test," Tamara Scott, a policy adviser and lobbyist with the FAMiLY LEADER, an Iowa-based social conservatives' group, told CBS News. "These are our children, and when you take parents out of the picture, which is what Common Core will do, most people find that offensive."

"It's going to be a top tier issue. I think it's really the sleeper issue going into 2016 in Iowa," another GOP strategist predicted.

The standards specify "what a student should know and be able to do at the end of each grade," according to the Common Core website. They also encourage states to develop testing regimens to measure student performance on an annual basis.


A Gallup poll last August found 76 percent of Republican voters nationwide are opposed to Common Core, and only 17 percent in favor.

Forty-three states and the District of Columbia have adopted the standards, a group that excludes Iowa. The issue, though, continues to animate Republican voters in the state, who fear that college admissions and standardized test development on a national level will synchronize with the standards, effectively subjecting Iowa students to them.

The potential Republican candidate most closely associated with Common Core is former Florida Gov. Jeb Bush, who's supported the standards for years and hasn't backed down from that stance as he weighs a likely 2016 bid.

Bush argued during a speech last November before an education reform group he co-founded that Common Core should be the"new minimum" in student achievement, and he challenged foes of the program to offer a better alternative.

Shane Vander Hart, a consultant with American Principles Project and Iowa RestorEd, an education reform group, told CBS News that kind of unapologetic support for Common Core is "a disqualifier for me."

"Polling seems to indicate that it's going to be a problem for him," he said. "It's our activists who come out to vote on caucus night. If you don't resonate with the grassroots, you're going to be in trouble here in Iowa, and I think Jeb Bush is getting off on the wrong foot."

Justin LaVan, a lawyer and president of the Network of Iowa Christian Home Educators, told CBS News that Bush's stance on Common Core will be a "big issue" for him in among Iowa caucus-goers. In general, LaVan said, a candidate's support for common core raises red flags "about who they are and what they believe about education and states' rights."

The threat Common Core poses to Bush, though, may be limited by the simple fact that he can afford to lose Iowa - his candidacy will likely be strong enough that he'll live to fight another day. He's also not banking on a strong showing among the ultraconservative wing of the party, tailoring his message on issues like immigration and taxes to appeal to the GOP's centrist, business-friendly wing.

But it's not just Bush who could face problems with GOP voters on the issue. One potential candidate whose viability does depend on a strong finish in Iowa -- former Arkansas Gov. Mike Huckabee -- has a complicated past on Common Core. And several Iowa conservatives suggested he'll need to offer a fuller accounting of his record on the issue if he hopes to repeat his 2008 Iowa caucus win in 2016.

Huckabee supported Common Core for years, even saying in 2013 he found conservative criticism of the standards "disturbing." But as he gears up for a run at the White House, he's backed away that position, urging conservatives not to "shed blood" over the issue and suggesting the standards have turned into something "toxic" he didn't anticipate.

"Folks, what Common Core may have originally been was a governor-controlled states initiative to keep the fickle federal fingers of fate off of education," Huckabee said last month at the Iowa Freedom Summit. "It has morphed into a 'Frankenstandard' that nobody, including me, can support."


"Anybody who tells you I support Common Core is incredibly less informed than he or she pretends to be or is just being plain dishonest because they really want to help somebody else," he added.

LaVan, the homeschooling advocate, said a lot depends on how clearly Huckabee expresses his opposition to the standards going forward. "He needs to deal with those key issues that have now become this Common Core monster," he said.

Scott, whose organization is helmed by Bob Vander Plaats, Huckabee's 2008 Iowa chairman, suggested the governor was not "waffling" on the issue, but that he'd simply changed his mind. "Huckabee has this ability to speak to people and talk so well, and he has found a new direction on the issue," she said.

Others, though, argued the issue could be a real liability for Huckabee in the Hawkeye State. Vander Hart, who supported Huckabee in 2008, said the governor's change of heart on Common Core "has definitely dinged him in some corners."

"I know people who supported Huckabee in the past who say they're not going to now," he said. "The issue has hurt him."

Several Republicans suggested Huckabee's strong reputation with Iowa conservatives on other issues could help offset any damage he takes on Common Core. But if the issue takes a real toll on him, some of his rivals are prepared to step into the breach.

"Mike Huckabee is a guy who can defend himself," said Brabender. "What I can tell you as a strategist is...anybody who says that they've supported Common Core in the past is going to have a difficult time explaining to GOP primary voters why they ever supported it."

And it's not as if conservative voters in Iowa have a lack of attractive options as 2016 approaches. "Rick Santorum, [Kentucky Sen.] Rand Paul, and [Texas Sen.] Ted Cruz have all been against Common Core from the get-go," Vander Hart said. Some Republicans praised former Texas Gov. Rick Perry for his steadfast opposition to the standards, and one suggested Louisiana Gov. Bobby Jindal's efforts to annul Common Core in his state, despite his prior support for the standards, could earn him some credit.


However Common Core ultimately plays in Iowa, the issue will likely resonate throughout the 2016 primary season as Republicans across the country have the opportunity to select a nominee.

"Common Core is big everywhere. You would be hard pressed to find a state where it's not a critical issue...and it is every bit as potent an issue as Obamacare or immigration or any other issue," said Brabender. "It's also probably one of the few issues where there are legitimate differences between the candidates."