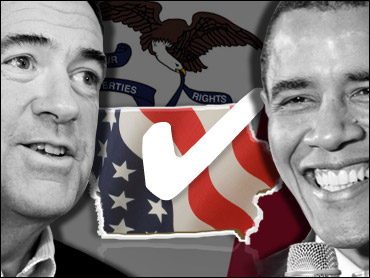 Sen. Barack Obama, bidding to become the nation's first black president, swept his way to victory in the Iowa caucuses Thursday night over Sen. Hillary Clinton and a high-powered Democratic field. Mike Huckabee rode a wave of support from evangelical Christians to win the opening round among Republicans in the 2008 campaign for the White House.

Obama, a first-term, 46-year-old senator from Illinois, told a raucous victory rally his triumph showed that in "big cities and small towns, you came together to say, 'We are one nation, we are one people and our time for change has come.'" (

Huckabee, a preacher-turned-politician, handily defeated Mitt Romney despite being outspent by tens of millions of dollars and deciding in the campaign's final days to scrap television commercials that would have assailed the former Massachusetts governor.

Huckabee's win was partly fueled by Republican caucus attendees' concern with values. Just under half of attendees chose "shares my values" as the candidate characteristic that mattered most to them in deciding their support - compared to a third who wanted a candidate who says what he believes, and 14 percent who sought a candidate with experience. Among those who wanted a candidate that shared their values, nearly half supported Huckabee. (Read more on why Huckabee won)

"Huckabee's victory rocks an already unpredictable GOP race," said CBSNews.com senior political editor Vaughn Ververs. "As the race heads to the New Hampshire primary just five days from now, it's not at all certain Huckabee has the time to capitalize on his momentum, but McCain has surged there in recent weeks, setting up a three-way battle that could be a must-win for Romney." (Read more analysis from Ververs)

With the New Hampshire primary only five days distant, Clinton and Edwards vowed to fight on in the race for the Democratic nomination.

Clinton called Obama to congratulate him, aides said. Her campaign manager, Patti Solis Doyle, vowed, "This race begins tonight and ends when Democrats throughout America have their say. Our campaign was built for a marathon and we have the resources to run a national race in the weeks ahead." (

"We have always planned to run a national campaign," the former first lady told supporters at a noisy rally attended by her husband and their daughter, Chelsea. "I am so ready for the rest of this campaign, and I am so ready to lead." (Read more on Clinton)

Edwards told The Associated Press he would fight on in New Hampshire. He said he would distinguish himself from Obama by arguing that he is the candidate who can deliver the change that voters have shown they want. "I'm going to fight for that change," he said by telephone from his hotel room in Iowa. "I've fought for it my entire life. I have a long history of fighting powerful interests and winning." (

New Mexico Gov. Bill Richardson said he would campaign in New Hampshire despite finishing in fourth place with a minuscule 2 percent support.

According to a CBS News entrance poll of Democratic caucus-goers, Obama's victory in the Iowa caucuses was driven by his support from a new political generation.

Well over half of those attending the Democratic presidential caucuses - 57 percent - were attending their first caucus ever, and their choice for the nomination was Obama, with 41 percent support. Clinton received only 29 percent of first-time votes, and Edwards trailed with 18 percent. (Among those who attended a caucus previously, Edwards - an Iowa caucus veteran from 2004 - won with 30 percent of the vote.) (Read more on why Obama won)

"Young and first-time voters delivered for Obama as his campaign predicted, and change was the number one concern of over half of Democratic caucus goers, creating the conditions for his victory," Ververs added. "His campaign now heads to New Hampshire with momentum, a state loaded with Independent voters who can now visualize him as a winner."

Projections estimated that 220,588 Democrats showed up on a cold midwinter's night, shattering the previous mark of 124,000.

Romney sought to paint his defeat in a positive light, saying he had trailed Huckabee by more than 20 points a few weeks ago. "I've been pleased that I've been able to make up ground and I intend to keep making up ground, not just here but across the country," he said. (

The words were brave, but already his strategy of bankrolling a methodical campaign in hopes of winning the first two states was in tatters - and a rejuvenated McCain was tied with him in the polls in next-up New Hampshire.

Iowans rendered their judgments in meetings at 1,781 precincts from Adel to Zwingle, in schools, firehouses and community centers where the candidates themselves could not follow.

While Republicans and Democrats both looked to Iowa to pass the first judgment of the election year, there was a key difference in the way they ran their caucuses. Republicans took a straw vote, then tallied the results. Democrats had a more complicated process in which one candidate's supporters might eventually wind up backing another contender.

Obama and Clinton each sought to make history, he the most viable black presidential candidate in history, she a former first lady bidding to become the first female commander in chief. Edwards battled them to a standstill, fighting to improve on the second-place finish in the 2004 caucuses that was good enough to land him the vice presidential slot on the Democratic ticket.

As Obama stressed a need for change, Clinton boasted of her experience and Edwards cast himself as the implacable enemy of special interests.

Romney stressed his background as a businessman and organizer of the 2002 Olympics, and he worked to persuade conservatives to ignore his earlier positions on abortion and gay rights. He ran the only commercials of the campaign critical of a rival, hitting Huckabee for his positions on immigration and the pardons he issued while governor of Arkansas.

At stake Thursday night in Iowa were 45 delegates to the Democratic National Convention next summer in Denver and 37 to the GOP gathering in St. Paul, Minn. But that was hardly the reason the crowded field of presidential hopefuls devoted weeks of campaigning, built muscular campaign organizations and spent millions of dollars on television advertising in the state.

For three decades, Iowa's caucuses have drawn presidential hopefuls eager to make a strong first impression, and this year was no exception.

Obama, Clinton and Edwards spent at least $19 million on television advertising between them, and all three capped their campaigns with statewide broadcasts on Wednesday. Romney told supporters in a final daylong swing around the state he had been in 68 of 99 counties since he began his quest for the White House, had spent 55 days in Iowa and spoken before 248 separate audiences.