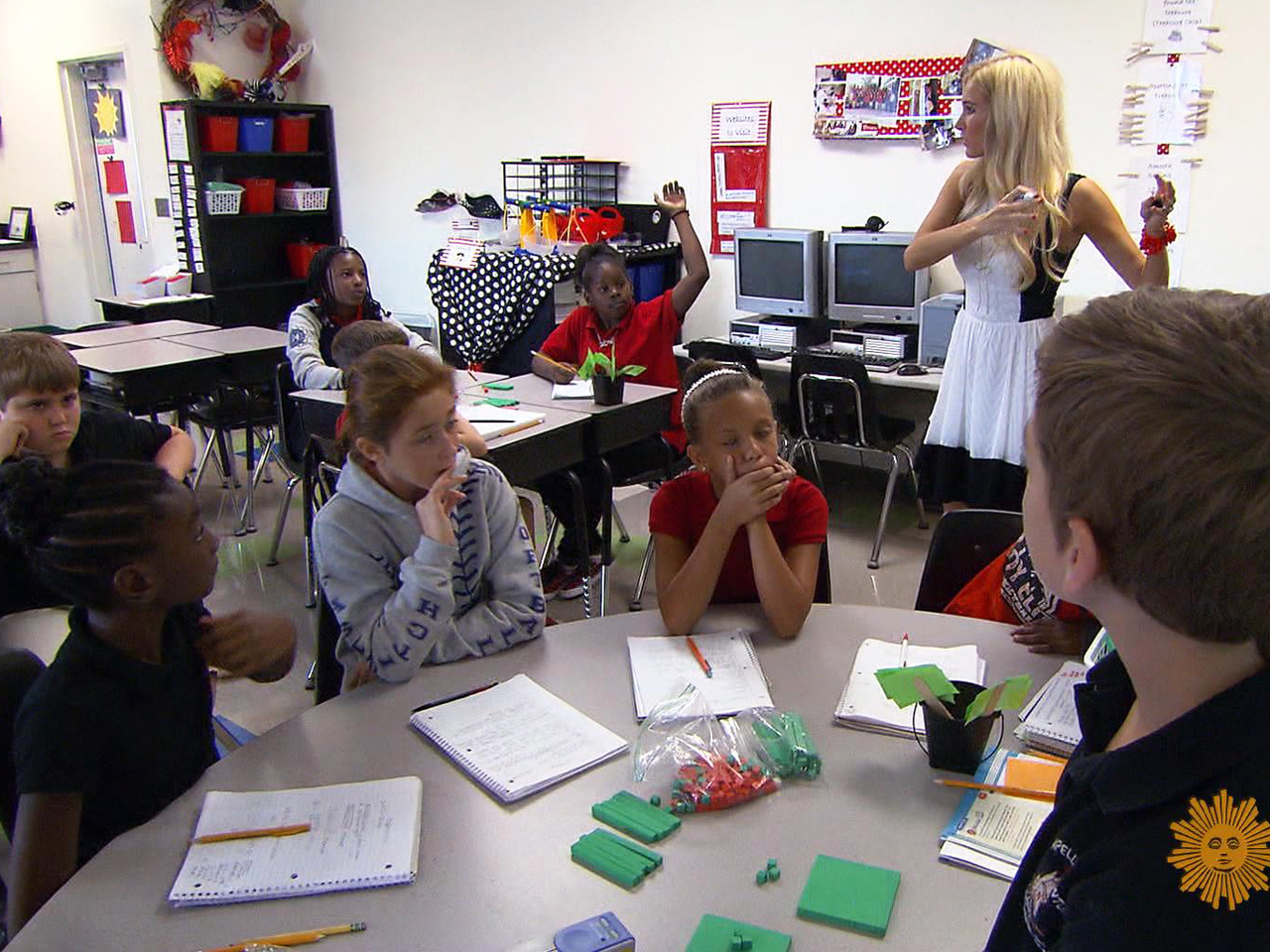 The core issue in education this brand new school year revolves around something called the Common Core. It's a prescription for teaching and grading students that's provoked an uncommonly spirited debate around the country. Our Cover Story is reported by Jan Crawford:

It's that familiar time again: Back to school. But something unfamiliar is happening in this fifth grade Florida classroom. It's a whole new approach to education.

"Who is ready to stand up as a team and be a lawyer, and be a group of lawyers, and defend their case with this?" asked the teacher.

"Very often, the strategy is to have students talk about things with other students in the classroom; that's what happens in real life," said MaryEllen Elia, the superintendent of the Hillsborough County School District in Tampa, where K-12 learning is being transformed by a new set of high academic standards called the Common Core.

"The Common Core raises the bar for students' performance," Elia said. "We have to challenge our students in ways that have them interact more actively in learning."

Florida is one of 45 states and Washington, D.C., that initially adopted the Common Core, which outlines what students must know at every grade level.

Launched by state officials, the Core was backed by the federal government, offering grant money to states signing on.

Secretary of Education Arne Duncan told Crawford that Common Core focuses on critical thinking skills, "and making sure that young people graduating from high school are truly prepared to be successful in college."

"How can our students fulfill their tremendous academic and social potential if we don't have high expectations?" Duncan said at a town hall meeting.

Crawford asked, "Why the need for reform of America's schools?"

"So many states, their standards were so low that kids who had worked hard, who had played by the rules, huge percentages of them weren't ready to be successful in college," said Duncan.

Or the world: The latest international exam results in math, science and reading show American kids are below average or middle-of-the-pack.

"I want to keep high-wage jobs in this country," Duncan said. "Businesses will go where the most educated workforce is. I want that to be right here in the United States."

The goal of helping kids learn more in the classroom is something that everyone can agree on. But here's a hard lesson: It's not so easy to figure out HOW to improve education.

The Common Core is now at the core of a heated national controversy.

One parent asked, "Is there anything that we as parents can do to drop Common Core? Is it up to us? Is it up to you? Is it up to the state? If we get enough people after it, can we drop it?"

Some complain about new methods of teaching: "We do not like the gyrations they go through in math," said one man.

Others have a different focus, believing, according to Elia, that Common Core has "a political agenda."

"There are factions that believe that Common Core is trying to take over students' minds, that it's trying to influence them in one political position or another," she told Crawford.

And then there's the perception among some conservatives that the federal government is overreaching into state affairs. That may be one reason why Florida re-named its standards the "Florida Standards," after making several changes, like the addition of cursive writing.

Crawford asked, "Is it mainly a change in name only, to get away from the toxic 'Common Core'?"

"Yes, it probably is, to an extent," replied Elia.

Other states -- like North Carolina, South Carolina, Missouri, Indiana and Oklahoma -- are either rethinking the Core, or have already dropped it.

And then there's New York State, where our story takes an unlikely turn.

Crawford said, "A lot of people think a lot of the criticism is from conservatives, from Tea Party groups."

Carol Burris, the principal of South Side High School on New York's Long Island, one of the top-rated schools in the country, told Crawford, "In New York and California -- now these are two very blue states -- in one year the Common Core has gone from majority approval to majority disapproval.

And Common Core, Burris said, are neither.

A self-described progressive who campaigned for President Obama, Burris has now found common ground on the Common Core with her political opposites. That's thanks in part to test questions that she says are too hard, or just plain confusing. Like this one for first graders:

"These [answers] are all adding," said Crawford.

"Yep. I have no idea," said Burris. "To be honest with you, I still haven't figured it out."

After raising her concerns in a letter to the President, Burris got a reply from Mr. Obama, disagreeing with her, but praising her school.

"Where have you been keeping this letter now?" Crawford asked.

"In a closet," said Burris. "I just can't bear to look at it. It would just be too much of a reminder of the hope that I once had that is now gone."

That hopelessness turned to anger last fall, when Secretary Duncan made a controversial remark. He stated that "white suburban moms" are opposing the Common Core because it shows that "their child isn't as brilliant as they thought they were."

That, Burris told Crawford, "was the most incredibly insulting statement I have ever heard a Secretary of Education make. You know, he walked back a little bit of the remark, but not enough."

Duncan told Crawford, "I made one sentence that I didn't say perfectly, and I apologized for that. But for me the goal, again, is to have high standards for everyone."

But is that goal even possible?

When asked if she believes Common Core will survive, Burris said no: "I think parents are going to continue to push back. So I guess you could say that I'm doing my best to make what I think is inevitable happen faster."

But back in Tampa, supporters see something else as inevitable: classrooms nationwide that look like this one, where a teacher tells her students discussing a standard algorithm that they're "stepping outside of the box."

"We have been improving standards in this country in education since 1680," she said. "I don't know of a parent, when I speak to them, that doesn't want their child to be well-prepared for college or career when they walk out of high school."