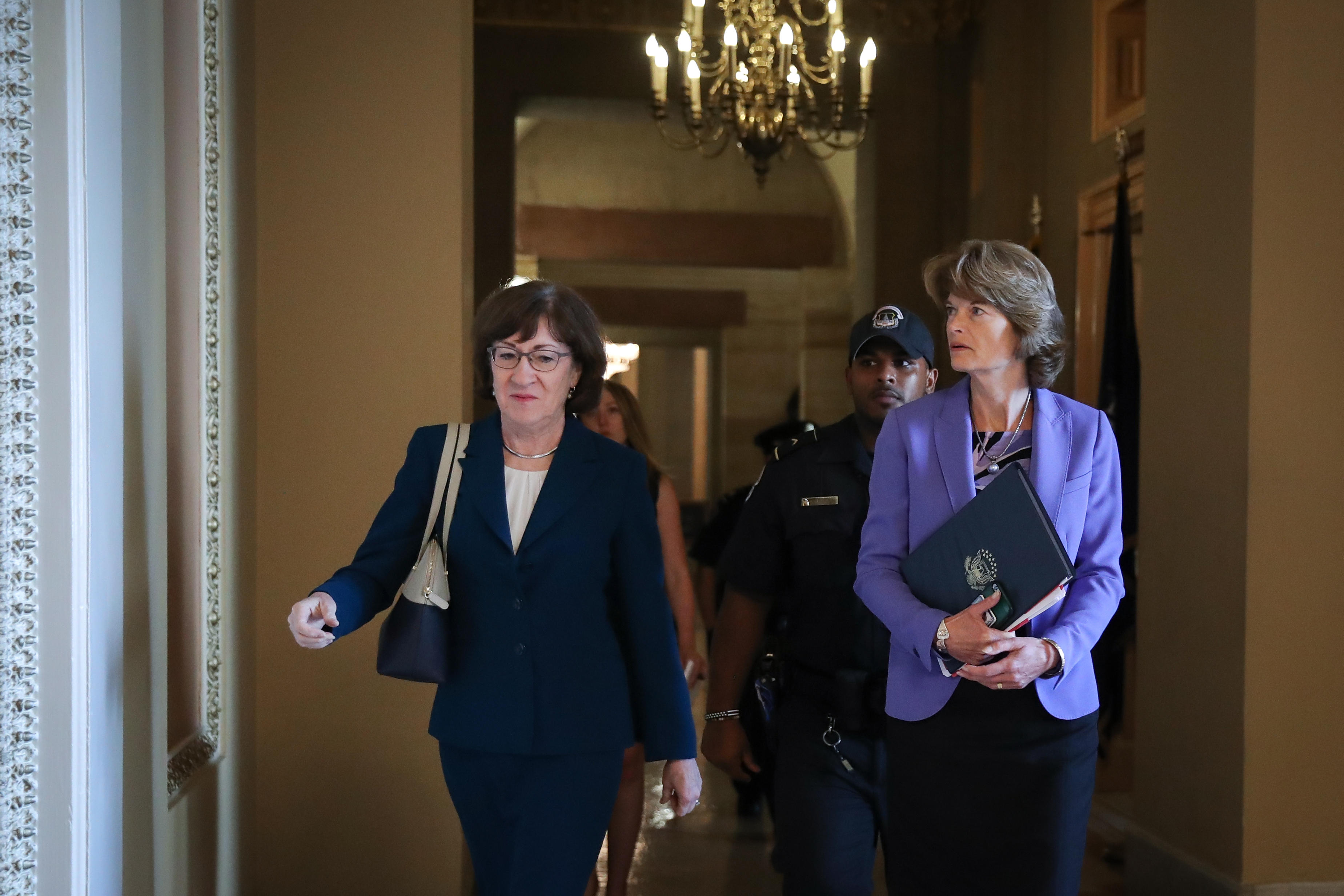 Whenever the Senate considers a controversial issue, congressional leaders and political observers immediately look to Republican Sens. Susan Collins and Lisa Murkowski, to see where their votes are. Since Republicans hold a slim 51-49 majority in the Senate, if all the Democrats are on one side, Majority Leader Mitch McConnell can only afford to lose a single vote for a measure to fail, giving the handful of moderates in the GOP caucus, including Murkowski and Collins, considerable power.

Collins announced on the Senate floor that she would vote to confirm Supreme Court nominee Brett Kavanaugh Friday afternoon, while Murkowski voted "no" in a procedural vote to advance his confirmation. The two are often lumped together as moderate Republican women, but their respective decisions on Kavanaugh demonstrate the differences between them.

Collins and Murkowski are seen as the quintessential moderate Republicans of the Trump era. They both voted against Mr. Trump's nomination of Betsy DeVos to be education secretary; Vice President Mike Pence had to break a tie to get DeVos confirmed. Most famously, they both voted against Senate efforts to repeal and replace the Affordable Care Act, joined by Sen. John McCain, last July. Collins and Murkowski both favor abortion rights, and have voted against bills which would restrict abortion access, with few exceptions.

But they are far from moderate in a historical sense. According to FiveThirtyEight, Collins votes in line with Mr. Trump 79 percent of the time, and Murkowski votes in line with the president 83 percent of the time. They both supported the Republican tax overhaul in December. Collins has voted for every one of Mr. Trump's judicial nominees, as has Murkowski, despite the fact that some of these judges have stances on abortion rights which contradict their own.

The two senators were seen as critical votes in Kavanaugh's confirmation, especially after the judge's nomination was stalled by decades-old sexual misconduct allegations. They also supported an FBI investigation into the allegations before his confirmation was brought to a floor vote.

Collins is a Northeastern Republican, an increasingly rare brand of politician that has historically trended more moderate. Her former colleague from Maine, Republican Sen. Olympia Snowe, was known as a bipartisan dealmaker and one of the most moderate members of Congress. Maine also has a significant independent streak: Snowe was replaced by Sen. Angus King, an independent who caucuses with the Democrats. But the prevalence of independent candidates has also contributed to a political environment that enabled the rise of right-wing firebrand Paul LePage. He was elected governor in 2010 with a plurality of the vote among four candidates, including two independents, and in 2014 with a plurality of the vote among three candidates.

Collins engages in a delicate balancing act between assuaging the strong conservatives that supported LePage, independents who don't identify with either party, and Democrats largely concentrated around Maine's cities -- all of whom could vote her out of power. Collins is up for re-election in 2020, meaning that her votes in the next two years could have an impact on her chances of winning a fourth term in the Senate. Her vote on the Kavanaugh confirmation is emblematic of the problem she faces: if she votes to confirm him, she could invoke the ire of the state's Democrats, but if she had voted against his confirmation, she could inspire a primary challenge from the right in 2020.

"As those who have known him best have attested, he has been an exemplary public servant, judge, teacher, coach, husband, and father," Collins said in her speech on the Senate floor about Kavanaugh. "Despite the turbulent, bitter fight surrounding his nomination, my fervent hope is that Brett Kavanaugh will work to lessen the divisions in the Supreme Court so that we have far fewer 5-4 decisions and so that public confidence in our Judiciary and our highest court is restored."

Murkowski is the daughter of former Alaska Gov. Frank Murkowski, who appointed her to her Senate seat in 2002. Even more so than Maine, Alaska has an independent streak, as an isolated state far from the hub of governmental activity in Washington, DC. Murkowski has at times shown herself essentially untouchable politically: after losing a GOP primary, she became the second person in Senate history to be elected on a write-in vote since Strom Thurmond in 1954.

In 2010, Murkowski was defeated in her primary during that year's wave election of conservative Republicans to Congress. She mounted a write-in campaign in mid-September, less than two months before the election, and won in large part due to the support of the Alaskan Native population and unions. She was re-elected in 2016, meaning that unlike Collins, she will not have to face the wrath of voters potentially upset with her vote on Kavanaugh's confirmation in the near future. That hasn't prevented right-wing figures such as Ann Coulter and Sarah Palin indicating that Murkowski might have a primary challenge in 2022.

Murkowski told reporters Friday that voting against the procedural measures was one of the most difficult decisions she had made as a senator.

"I believe that Brett Kavanaugh is a good man. I believe he is a good man, it just may be that in my view he is not the right man for the court at this time," she said.

Murkowski voted against repeal and replace of the ACA in part because she wanted to protect Planned Parenthood, and had promised her constituents that she would do so. Both Alaska and Maine have also struggled with managing health care costs. But both Collins and Murkowski faced an outpouring of responses from constituents who actively opposed repeal-and-replace, which may have factored into their decisions.

The two also faced significant pressure from both sides of the aisle on their vote on Kavanaugh. Protesters in the Capitol specifically targeted Collins in an attempt to convince her to vote against Kavanaugh, while other protesters have gone to her house in Maine. Protesters have also gathered at Murkowski's Alaska offices to urge her not to vote for Kavanaugh.

Demand Justice, a progressive group, spent $700,000 in ads targeting Murkowski and Collins, and two other senators, too -- Nevada Sen. Dean Heller and Colorado Sen. Cory Gardner. Collins was also targeted with anti-Kavanaugh ads from NARAL Pro-Choice America. The Progressive Change Campaign Committee has taken out ads against Kavanaugh in local newspapers in Alaska and Maine. A group of liberal activists in Maine even launched a crowdfunding campaign, and promised to give the money to Collins' opponent, should Collins vote for Kavanaugh's confirmation. After Collins announced her decision on Friday, the crowdfunding site crashed because of too many page views.