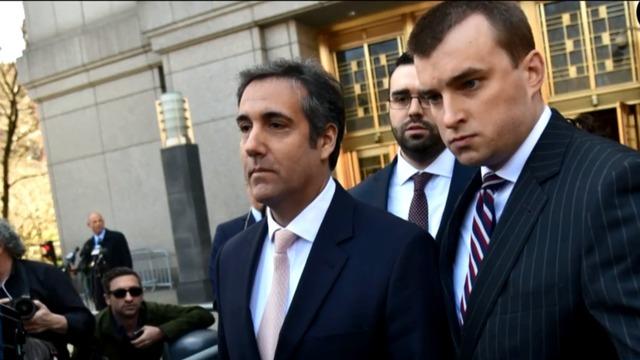 Michael Cohen, President Trump's longtime personal attorney and confidant, is seemingly all over the news these days. He's the target of a federal investigation that resulted in charges and an FBI raid, is being sued by an adult film star, and has gotten in some trouble for his apparent efforts to lobby his old boss on behalf of deep-pocketed clients.

It's a lot to keep track of. So here's a refresher on all the ways a once-obscure New York lawyer became one of America's most prominent people in the Trump era.

Much of Cohen's legal woes stem from his payment to adult film star Stormy Daniels of $130,000 to keep her from talking about an alleged affair she had with Mr. Trump back in 2006. Cohen made the payment via a wire transfer, which was arranged using a Trump organization email address. Cohen at the time said that he had used his own personal funds to pay Daniels in 2016.

Mr. Trump and several White House officials had repeatedly denied ever being aware of the payment to Daniels. But Mr. Trump's attorney Rudy Giuliani revealed earlier this month that the president himself repaid Cohen for the payment, and reimbursed him over a period of several months.

The Avenatti back and forth

Avenatti has tried to intervene on behalf of his client Stormy Daniels in the matter of Cohen's search warrants. Avenatti has come into the possession of Cohen's bank records and has alleged that Trump's fixer has been paid thousands of dollars from American companies as well as foreign interests, in exchange for access to the president. Avenatti believes that his client's name and information were included in the communications and documents seized by the FBI.

The raid and charges

Cohen's home, office and hotel room were raided by the FBI in April, after he had been, according to the Justice Department, "under criminal investigation" for months over his personal business dealings. Mr. Trump called the raids a "disgrace." The search warrant documents executed for the raids mentioned Mr. Trump by name several times, as well as records related to the release of the so-called "Access Hollywood tape: and NDA agreements with Daniels.

While prosecutors have blacked out court documents describing what laws they think Cohen has broken, they say the "crimes being investigated involve acts of concealment" and suspected fraud, according to the government. The raid stemmed from information gathered during the course of Mueller's investigation into Russian election meddling, but is a part of a separate federal investigation.

During Cohen's appearance in a New York Court, he was forced to reveal that one of his clients was Fox News host Sean Hannity. Judge Kimba Wood made one of Cohen's attorneys identify him in open court in connection with an FBI raid of Cohen's files.

Hannity has since denied that Cohen ever represented him, and instead told listeners on his radio show that he occasionally sought Cohen's advice on legal matters, particularly real estate cases. Hannity maintains that he never paid legals to Cohen, and had assumed his conversations with Cohen were "attorney-client confidential."

Essential Consultants is the corporate entity that Cohen used to pay Stormy Daniels that $130,000 for her silence.

Cohen also used the firm to receive payments from companies like Novartis and AT&T, which paid him for his advice after Mr. Trump took office. Cohen brought in millions of dollars through the LLC, which is headquartered in Delaware. It also allegedly received money from Viktor Vekselberg, a Russian oligarch with close ties to Russian president Vladimir Putin. Vekselberg became the target of U.S. sanctions earlier this year.

According to Delaware state records, Essential Consultants LLC was incorporated on Oct. 17, 2016, days ahead of the presidential election.

According to the Washington Post, Cohen solicited a payment of at least $1 million from Qatari government in late 2016, an offer he made in exchange for access and advice related to the Trump administration. The Post reported that Cohen made the offer to Ahmed al-Rumaihi, the head of Qatar Investments, a division of the Qatar Investment Authority (QIA), which exists as the country's sovereign wealth fund. Al-Rumaihi reportedly declined the offer, but the report highlighted an alleged instance of Cohen offering access to a foreign government in exchange for seven figures.

Al-Rumaihi disputes the Post's reporting, saying that the fee was brought up in the context of a discussion regarding the QIA's interest in U.S.-based infrastructure investments.

Among Cohen's financial interests is the taxicab business -- according to various media reports he still owns over 30 taxi medallions and once had a taxi business with over 200 cabs. The New York Times reported that Cohen, as he began to step away from the taxi business, looked to Evgeny Freidman, known as the "Taxi King," to take over running his cabs.

Freidman's major legal troubles began when, according to the Times, he stiffed New York on $5 million in taxes for mass transit improvements. In May, the Times reported Freidman made a deal to cooperate, pleading guilty to evading just $50,000 in taxes. Freidman agreed to aid state or federal prosecutions, which could add to the pressure on Cohen as Mueller continues to investigate Russian meddling in the 2016 presidential election.

Cohen claims that he has never been Freidman's partner in the taxi business.

The BBC reported in May that Cohen was secretly paid at least $400,000 by Ukraine to help arrange talks between Ukrainian President Petro Poroshenko and President Trump, citing sources in Kiev who are close to those involved. According to the report, Cohen was paid through intermediaries acting on Poroshenko's behalf, even though he was not registered as a foreign agent of Ukraine under the U.S. Foreign Agents Registration Act.

Striving to get more than a brief handshake from Mr. Trump, Ukrainian interests acting on Poroshenko's behalf sought a backchannel to the president. They turned to Cohen, hoping he could help arrange a higher-profile meeting. The two leaders ultimately met in June 2017 in the Oval Office and had what Poroshenko was able to tout as a substantive visit. Afterwards, Ukraine dropped its investigation into former Trump campaign chairman Paul Manafort and made deals with the U.S. to import coal, locomotives and Javelin anti-tank missiles.

Cohen and the Ukrainians identified by the BBC as having opened the backchannel to Mr. Trump deny the report.

Last month, the Wall Street Journal reported that Cohen negotiated a $1.6 million payment to Shera Bechard, a former Playboy playmate who said she was impregnated by Elliott Broidy, a prominent Republican fundraiser. Broidy admitted to both the affair and the pay-off, and promptly resigned his post as the Republican National Committee's finance chair.

"I acknowledge I had a consensual relationship with a Playboy Playmate," Broidy said in a statement to the Journal. "At the end of our relationship, this woman shared with me that she was pregnant. She alone decided that she did not want to continue with the pregnancy and I offered to help her financially during this difficult period."

Broidy, a venture capitalist who raised money for Mr. Trump during the 2016 campaign, worked with Cohen at the RNC. Broidy retained the services of Keith Davidson, the same lawyer who worked with Stormy Daniels when she received her payment from Cohen. Another Playboy playmate who says she had an affair with Mr. Trump, Karen McDougal, also hired Davidson when she negotiated a deal to sell her story to the parent company of the National Enquirer, which kept it under wraps.

"Obviously, if I'd known in January 2017 that I was about to hire this high-profile guy who'd wind up in this big mess, I wouldn't have introduced him to my biggest client, and wouldn't have hired him at all," Intrater told the Times. Intrater also said that the meeting was brief, and that Vekselberg had no role in the decision to hire Cohen.