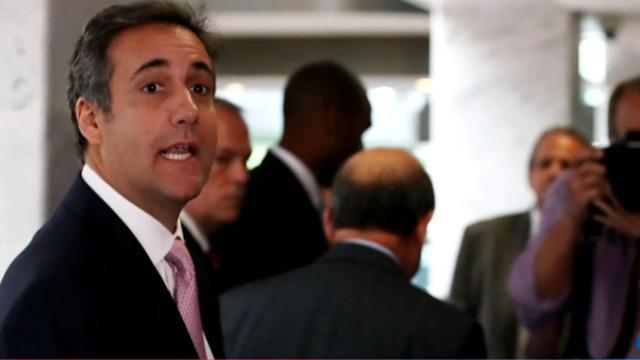 Federal prosecutors said in a court filing Friday that the criminal probe that led them to raid the offices of President Donald Trump's personal lawyer, Michael Cohen, is focused on the attorney's "personal business dealings" and has been going on for months. In the filing with a court in New York, prosecutors blacked out a section describing what laws they believe Cohen has broken, but they said the "crimes being investigated involve acts of concealment" and suspected fraud.

They also made clear that investigators have been gathering extensive evidence for some time as part of an ongoing grand jury investigation. Agents, they wrote, had already searched multiple email accounts maintained by Cohen after securing an earlier search warrant.

None of those emails, they added, was exchanged with Mr. Trump.

In a footnote, the prosecutors wrote that although the investigation was referred to prosecutors in New York by special counsel Robert Mueller, it was proceeding independently.

The U.S. Attorney's office in Manhattan made the filing after lawyers for Cohen and Mr. Trump asked a judge to block the Justice Department from reviewing records seized Monday in FBI raids on Cohen's apartment, hotel room, office and safety deposit box.

In a court hearing before U.S. District Judge Kimba Wood, Cohen's lawyers asked to examine the seized documents and electronic devices. The lawyers said they should be allowed to identify which of the documents are protected by attorney-client privilege before prosecutors get to look at them.

Michael Avenatti, who represents Stormy Daniels, spoke outside the courtroom.

"Clearly Michael Cohen was his longtime attorney and effectively knows where all of the bodies are buried as they say, and I think that in the event that Michael Cohen is ultimately charged that that could pose significant and very, very serious problems for the president of the United States."

An attorney for the president, Joanna Hendon, appeared as well, telling the judge that Mr. Trump has "an acute interest in these proceedings and the manner in which these materials are reviewed."

"He is the president of the United States," she said. "This is of most concern to him. I think the public is a close second. And anyone who has ever hired a lawyer a close third."

But Assistant U.S. Attorney Tom McKay told the judge that he believed the proceedings were an attempt to delay the processing of materials seized in the search.

"The issues here are straightforward," he said.

Of Mr. Trump, McKay said: "His attorney-client privilege is no greater than any other person who seeks legal advice."

Federal agents seized records on a variety of subjects in raids Monday on Cohen's Manhattan office, apartment and hotel room, including payments that were made in 2016 to women who might have damaging information about Mr. Trump. The raid was authorized by Deputy Attorney General Rod Rosenstein, who is overseeing Mueller's investigation into Russian meddling in the 2016 election. On Monday evening, Mr. Trump called the raid "a disgraceful situation and a "total witch hunt."

"Here we are talking about Syria ... and I have this witch hunt constantly going on for over twelve months," Mr. Trump said, describing the raid as as an attack on the country and on "what we all stand for ... a whole new level of unfairness."

The court hearing Friday didn't provide new insight into why agents seized the items, but the judge, prosecutors and the attorneys all spoke openly about an investigation that previously has been shrouded in secrecy.

Ordinarily, documents or communications seized from a lawyer by FBI agents would be reviewed by a team of Justice Department lawyers not directly involved in the investigation to determine which documents were relevant to the probe, and which should be off-limits to investigators because of attorney-client privilege.

The judge said prosecutors believed either a special "taint team" of government lawyers should decide what evidence can be properly viewed by criminal prosecutors. Or, they said, the court could appoint a special master for that purpose.

Hendon asked for a delay in court proceedings until at least Monday, saying she needed to research the law.

Clifford's lawyer, Michael Avenatti, was in the audience for the court session and asked the judge to be heard at 2 p.m.

"We have every reason to believe that some of the documents seized relate to my client," he said.

Mr. Trump has called the raids a "witch hunt," ″an attack on our country," and a violation of rules that ordinarily make attorney client communications confidential.

Those confidentiality rules can be set aside under certain circumstances if investigators have evidence that a crime has been committed.

Public corruption prosecutors in the U.S. attorney's office in Manhattan are trying to determine, according to one person familiar with the investigation, if there was any fraud related to payments to McDougal and Clifford.

McDougal was paid $150,000 in the summer of 2016 by the parent company of the National Enquirer under an agreement that gave it the exclusive rights to her story, which it never published. Cohen said he paid Daniels $130,000 in exchange for her silence about her claim to have had a one-night-stand with Trump.