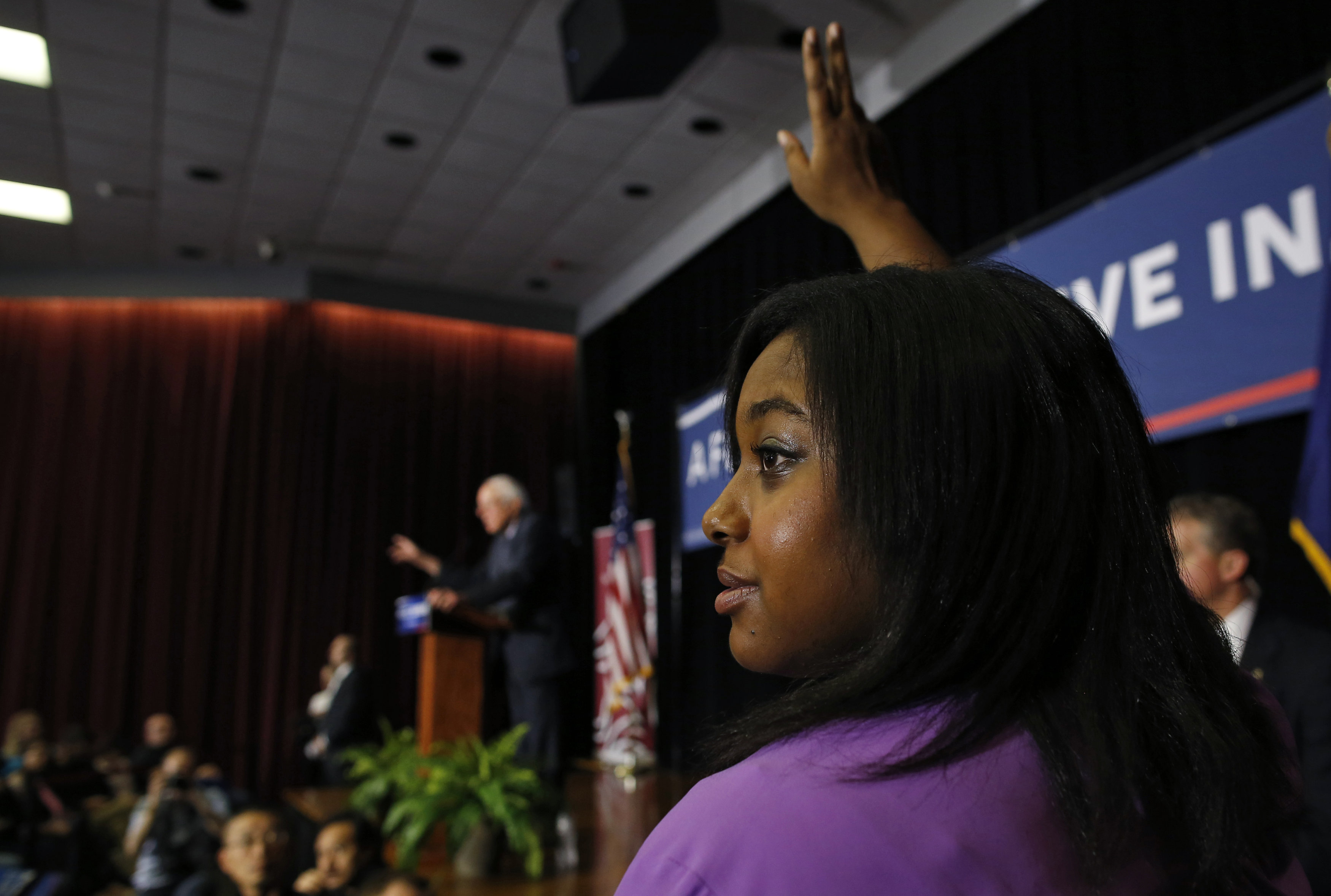 The daughter of Eric Garner, whose death as a result of a police chokehold in New York set off a spate of protests against police brutality, joined Bernie Sanders in South Carolina Tuesday to praise him as a "fearless public servant that is not afraid to stand against the establishment for the people."

Erica Garner is eager to build a legacy of political activism in the wake of her father's death, and part of that is helping to galvanize young black voters in this election. To this end, she considered carefully whether to support Sanders or Hillary Clinton. She settled on Sanders.

"Once I did my research, I reached out to his campaign, and I asked them how can I get involved," Garner explained to CBS News.

By the end of January, she had written an op-ed in the Washington Post announcing her endorsement of Sanders.

"[Sanders] spoke out, in speeches and debates, about Sandra Bland and declared that black lives do matter," Garner wrote in the Post. "He heard us, and I believe he'll continue to listen."

Last week the campaign released four-minute video in which Garner talks about seeing her father's death on national TV, her own hardships, and her decision to speak out so "no one will ever forget." Garner also talked about teaching her six-year-old daughter about Rosa Parks and explaining that the struggle for African Americans in the U.S. "is not really over."

"People are dying. This is real. This is not TV. We need a president that is gonna talk about it," Garner says in the video. "I'm behind anyone who's going to listen and speak up for us, and I think we need to believe in a leader like Bernie Sanders."

That video, which was also her idea, has been cut into a campaign TV ad released Wednesday in South Carolina and nationally this week. Garner sent the campaign raw video, and told them she wanted to talk about her motherhood and activism.

Garner told CBS News that she preferred Sanders to Hillary Clinton in part because of his activism.

"If you look at Bernie Sanders's record, he is protester," Garner said. "Just like me -- I am a protester....I feel connected to him because he has been marching with Martin Luther King. He got arrested for fighting for equal housing rights. He has been talking about our issues for a very long time."

And his proposal to make college tuition-free also appeals to her, as she keeps her daughter's future in mind. Garner says her daughter may not be able to go to college because of student debt, but she believes her daughter might have "a better shot" if Sanders is elected president.

African Americans are a key group in South Carolina, where they made up 55 percent of Democratic primary voters in 2008. However, their turnout that year was no doubt boosted by enthusiasm for Barack Obama's candidacy, and there is little reason to believe Democratic turnout in 2016 will match that. According to the most recent CBS News Battleground Tracker poll, Clinton is leading Sanders among African Americans in South Carolina by 73 percent to 26 percent.

Both Clinton and Sanders have been campaigning aggressively for black voters. Clinton met with civil rights leaders Tuesday and spoke in Harlem on increasing economicy opportunity for black American families. Sanders has also been talking about the struggles faced by the black community. In South Carolina and elsewhere, he has been making the point that after the 2008 economic downturn, African Americans "suffered more and [have] recovered in a much less significant way."

Garner has been campaigning for Sanders in South Carolina and plans to stick with him beyond the Palmetto State.

"I plan to go with him all the way. All the way from state to state -- wherever he is at, I want to go. Wherever I can talk to people about him I want to go," Garner says. She will canvass in South Carolina on Sanders' behalf in the days leading up to the primary next Saturday.