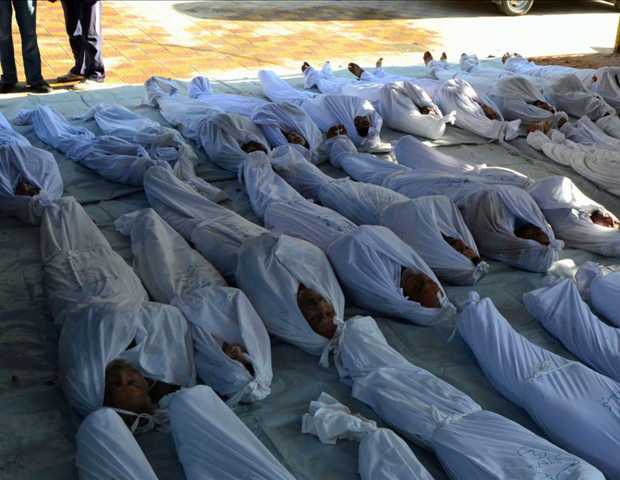 The pictures and video were horrifying: Rows of lifeless bodies, many small children, dead or dying as a result of an apparent chemical weapons attack on the Syrian opposition.

While a United Nations inspection team works to conclusively determine the nature of the attack, Secretary of State John Kerry said the evidence indicates that it is "undeniable" that chemical weapons were used against civilians, something he described as a "moral obscenity." With President Obama having described the use of chemical weapons in Syria a "red line," the United States and its international partners now appear to be gearing up for military action against the regime of Syrian President Bashar Assad.

But while no one would deny the horror of the apparent chemical attack, there are those who wonder why the president set the use of chemical weapons as the "red line" for U.S. action in the country's bloody civil war. The United Nations said last month that more than 100,000 people have died in that war to that point, far more than the estimated 355 who died in the chemical attack.

Anthony H. Cordesman of the Center for Strategic and International Studies wrote Monday that "[c]hemical weapons alone are not a reason to use force."

"[A]nyone who has actually seen wounds from conventional artillery -- or badly treated body wounds from small arms -- realizes that chemical weapons do not cause more horrible wounds," he wrote. "If anything, an agent like Sarin tends to either kill quickly or result in relative recovery."

Richard M. Price, author of "The Chemical Weapons Taboo" and a professor at the University of British Columbia, told CBSNews.com that the taboo against using such weapons was grounded in two factors. The first is that they were banned before they existed in any serious form, in the 1899 Hague "Declaration concerning the prohibition of the use of projectiles with the sole object to spread asphyxiating poisonous gases." That ban, he said, held more weight because the weapon in question was not already in use. (The 1925 Geneva Protocol and a 1997 international treaty also banned the weapons.)

The second factor, Price said, is "the tradition of non-use." He noted that even Adolf Hitler declined to use chemical weapons on the battlefield in World War II. (It should be noted, of course, that Hitler did use them to slaughter civilians in gas chambers.) "The common notion is, wow, even Hitler didn't do this, so it must be really bad," said Price. He added that the tradition of non-use "itself made their use anomalous, so it's continued to raise the threshold that you would only use them under really dire circumstances."

While the Germans used chemical weapons in World War I, as John Mueller pointed out in Foreign Policy in April, the British cast such weapons as particularly inhumane - a decision Mueller writes was designed in part to pull the United States into the war. The notion that chemical weapons use is particularly morally reprehensible has largely stood until today: Saddam Hussein stands alone among world leaders in the widespread use of chemical weapons in attacks against both Iran and the Kurds in the 1980s.

There is also the notion that using chemical weapons is cowardly compared to more traditional warfare. Price noted that the same was once said of the crossbow, which he said was once widely seen as less "manly" than hand-to-hand combat. "These notions are very common with a new contrivance of warfare," he said. "You could say the same of drones."

Cordesman told CBSNews.com that the most recent attack needs to be understood in context. It was, he said, an escalation from a regime that had been given "signal after signal" not to deploy chemical weapons, as well as a decision to fire "into a civilian area to try to take over a sensitive part of northern Damascus without any regard to the number of women and children involved." He also noted that it appears that the Assad regime seemingly tried to destroy or hide the evidence of what it had done. "These are all issues that you can't disregard," he said.

For the United States, meanwhile, credibility was on the line: Particularly since the U.S. had declined to act after earlier, unconfirmed reports of smaller-scale chemical weapons use by Assad, standing on the sidelines now would feed perceptions that the U.S. is a declining power in the region. In calling chemical weapons a "red line," the president painted himself into a corner in which an attack like this gave him little choice but to act.

Of course, Mr. Obama likely didn't expect an attack like this: Price said it is "really puzzling" that Assad seems to have deployed chemical weapons, since he does not seem to have reached a desperation point in his fight against the opposition. If the United States and its partners do not act now, Assad could feel empowered to raise the stakes even further.

"The fear is that the regime and the actors there have access to a large stock of chemical weapons and if there's no deterrent to attacks, it sets a terrible precedent and allows the Assad regime and others watching to think they can get away with the use of chemical weapons," said CBS News senior national security analyst Juan Zarate.

Cordesman noted the calculus doesn't end there: "If chemical is all right, is biological all right, is nuclear all right?" he asked. When it comes to military action against Assad, he added, "You get into the much broader question - if not now, when?"

IN DEPTH: Crisis in Syria