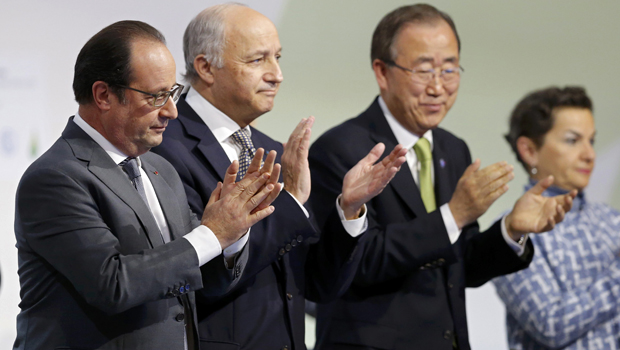 After negotiators from nearly 200 countries struck a sweeping deal meant to combat the effects of climate change, President Obama praised the agreement as "historic" and attributed its passage to "American leadership."

"The problem's not solved because of this accord, but make no mistake, the Paris agreement establishes the enduring framework the world needs to solve the climate crisis," the president said late Saturday in a speech from the White House's Cabinet Room. "It creates the mechanism, the architecture, for us to continually tackle this problem in an effective way."

But who benefits from the new "architecture" the accord creates? And what will the deal cost for others?

On its face, the plan agreed to on Saturday affects just about every nation. It requires countries to limit the rise in global average temperature to below 2 degrees Celsius by the year 2100. It also sets an even more ambitious goal to slow the warming further -- down to just 1.5 degrees Celsius. (In the years since global industrialization, the world's temperature has already risen 1 degree Celsius.)

To achieve this goal, countries that signed on to the agreement promised that they would focus on cultivating clean, renewable energy sources and shift from the use of fossil fuels. They will also be required to report on their progress in reducing greenhouse gas emissions every five years.

According to President Obama, the targets are bold, but they also empower "businesses, scientists, engineers, workers, and the private sector -- investors -- to work together."

So there may be many vested parties with a stake in the climate change deal -- but there are also a few key winners and losers. We take a look at them here:

According to the Internal Displacement Monitoring Centre's (IDMC) 2015 Global Estimates report, "an average of 26.4 million people per year have been displaced from their homes by disasters brought on by natural hazards" since 2008. These threatened populations are largely found in developing countries, which tend to be more vulnerable to rises in sea level, droughts, and floods.

The climate accord in Paris, however, have many in the developing world cheering.

In a preamble, the deal doubles down on a pledge made six years ago, that richer, industrialized countries will contribute at least $100 billion of aid a year to poorer nations to help them battle the effects of climate change by 2020. It also promises that countries will consider increases to that amount in the future.

Mohamed Adow, senior climate change adviser from the disaster relief agency Christian Aid, told CBS News that this is one of the most important aspects of the COP21 accord: the promise provides poorer nations with the "assurance that the international community will not leave developing countries to deal with climate impact."

Some nations were not entirely satisfied with the final language -- there is still, after all, no legally binding provision that holds industrialized countries to this pledge for "adaptation" funds -- but nonetheless, Adow said, it gives significant hope to those countries hit especially hard with the threat of displaced citizens.

In fact, the aid money already seems to be flowing in light of the Paris negotiations: early this week, the U.S. promised to double its own aid to affected countries to $861 million as part of last-ditch efforts to push the climate deal through.

The effects of climate change in poor and developing nations also pose an increasing terror threat to the United States -- a connection that President Obama has made in the past, when he called global warming "an economic and security imperative" just weeks after the Nov. 13 attacks in Paris.

As Democratic presidential candidate Bernie Sanders explained it on CBS' "Face the Nation" in November: "If we are going to see an increase in drought, in flood, and extreme weather disturbances as a result of climate change, what that means is that people all over the world are going to be fighting over limited natural resources... When people migrate into cities and they don't have jobs, there's going to be a lot more instability, a lot more unemployment, and people will be subject to the types of propaganda that al Qaeda and ISIS are using right now."

Military reports have also viewed climate change as a "catalyst for conflict," and the Pentagon's Quadrennial Defense Review last year dubbed its effects as "threat multipliers" that ultimately lead to "conditions that can enable terrorist activity and other forms of violence."

But the climate change deal seeks to mitigate these possible conflict catalysts so that "countries that don't have the resources to address these problems head on, now will," Jon Powers, who served the Federal Chief Sustainability Officer and Special Advisor on Energy to the U.S. Army in the Obama Administration, told CBS News.

Of the promised $100 billion of aid yearly, Powers points out, "that type of funding is going to the most vulnerable folks" that would otherwise be prime targets of radicalization.

Renewable energy markets and their investors

One important target put forth by the deal was to ensure that parties would "undertake rapid reductions thereafter in accordance with best available science, so as to achieve a balance between anthropogenic emissions by sources and removals by sinks of greenhouse gases in the second half of this century."

Here, the deal aims to strangle heavy carbon-emitting industries -- the "anthropogenic emissions" -- and cut down on total fossil fuels burned worldwide. Importantly, it's also a nod to investment in and development of new technologies that would remove carbon dioxide from the air.

After leaving the Paris talks, U.S. Energy Secretary Ernest Moniz told CNBC in an interview, "We recognize fossil fuels will continue to be a part of the portfolio for quite a long time," but that the popularity of other power sources are on the rise.

"Wind energy has gone up by several fold just in the last five to six years," Moniz said, "and now (wind) provides about 4.5 percent of our electricity. You add that with solar, we're talking 5 percent."

Mindy Lubber, whose non-profit Ceres gathered together a host of business leaders and investors in Paris to lobby for a strong climate deal, told CBS News that for businesses, the deal exacts "a price on carbon" and thus gives markets "certainty of more investment in a green-energy future."

Ceres lobbyists were in Paris with large financial institutions like Bank of America and Citigroup -- companies that, according to Lubber, "are seeing that investing in a fossil fuel economy is no longer viable."

And even if they're not directly involved in renewable fuel markets, other global brands have have shown their support of the climate deal as well.

Rob Bernard, the Chief Environmental Strategist for Microsoft, said the Paris negotiations provide some assurance for "corporations around the world to accelerate their low-carbon investments and foster the creation of a true low-carbon global economy."

Kathleen McLaughlin, the chief sustainability officer for Walmart, said in a statement that the company would "support the U.N.'s call for the U.S. corporate sector to commit to science-based targets to reduce emissions."

Ahead of the Paris summit, China -- the world's biggest coal consumer -- said it would aim to cut its greenhouse gas emissions by nearly two-thirds of its 2005 levels. In the past, international monitoring of those numbers would have been difficult to do, but the COP21 deal changes that.

The agreement holds nations accountable for reporting their progress on their climate goals in a global "stocktake" every five years starting in 2023. It also means countries will be monitoring, verifying and reporting their greenhouse gas emissions in a single accounting system.

According to one report released last month by the carbon investment think tank Carbon Tracker, fossil fuel companies could risk over $2 trillion dollars of current and future projects being left valueless as the market for fossil fuels narrows with recent global climate change action.

"We're going to see limitations in high fossil-fuel emitting industries immediately because of the market signals," Lubber said. "Large fossil fuel companies would have liked to see a different agreement -- a much weaker one, but we now have the will of the world."