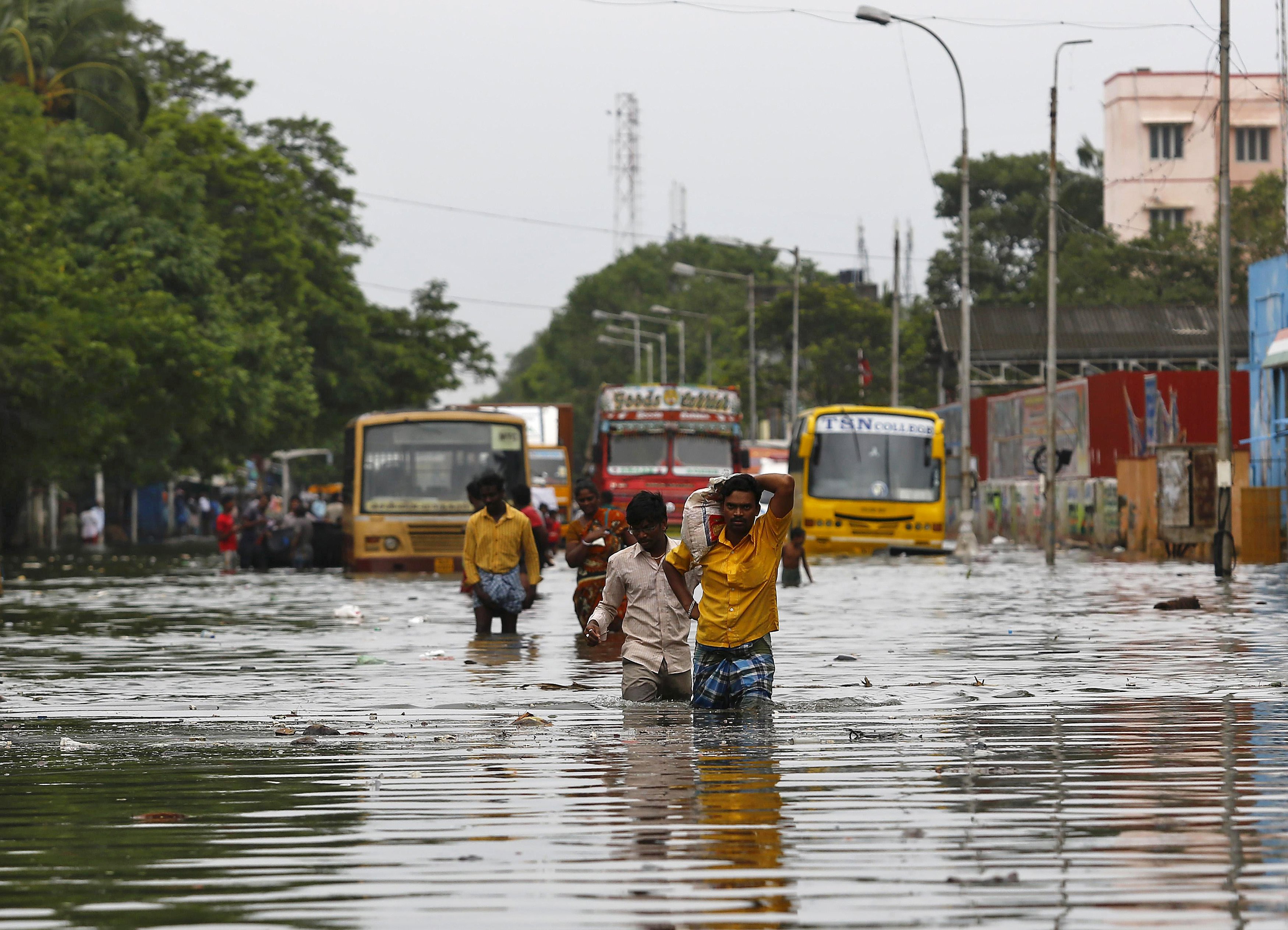 NEW DELHI -- The future will be a watery one for some of the world's biggest cities.

Predicted sea level increases this century mean many face increased flooding, stronger storm surges and unpredictable weather. How well coastal cities can cope will dramatically affect quality of life and their economic destiny. Many of the biggest are in Asia, powering economies while housing hundreds of millions of poor in sprawling slums.

Scientists generally agree seas will rise an average of 1 meter (3 feet) this century, though some predict an eventual increase as high as 6 meters on average. How quickly these changes occur will partly depend on whether negotiators at this week's U.N. climate talks in Paris can broker a strong treaty to limit the release of climate-warming greenhouse gases.

But with a certain amount of sea rise considered inevitable as warmer temperatures melt glaciers and expand oceans, cities will have to adapt quickly to spare investors losses and citizens from disaster. Those unprepared risk being highlighted as poor places to invest.

"It's difficult for businesses and societies to grasp what's happening," said Richard Hewston, a climate change analyst at Verisk Maplecroft, which advises companies on business risks. But some governments now realize "they need to pay attention to these climate risk factors to attract investment."

Global losses from flooding in coastal cities are already averaging about $6 billion a year, according to a 2013 study published in the journal Nature. Those losses could rise to $52 billion annually by 2050, it said.

Asia is particularly vulnerable because many of its countries are still struggling to lift hundreds of millions up from poverty, while its cities attract droves of migrants seeking better economic opportunities. Within a decade the world is expected to have 37 megacities with populations over 10 million, and 21 of them will be in Asia.

The Bangladesh capital, Dhaka, holds sprawling slums to which millions fled when rising seas swallowed their coastal homes. India's finance capital Mumbai has an annual gross domestic product of about $151 billion, along with some 2.8 million people crammed into low-lying slums that flood regularly.

"There are many children, too, who live in these homes," said Birender Bacchar Singh, who lives in Mumbai's Dharavi slum. "Sometimes when huge waves reach the houses and crash, the shacks collapse and all our belongings get washed away. Yet we have no option but to live here."

But the economic contribution of these cities is crucial. Highly vulnerable Dhaka alone makes up more than half of Bangladesh's GDP of $150 billion. Frequently flooded Manila accounts for two-third of the Philippines' economy, while Shanghai's $594 billion GDP or Hong Kong's $416 billion are bigger than the economies of many nations.

In India, Prime Minister Narendra Modi has a vision of 100 smart cities popping up across the country, integrating high-tech systems for transportation, communication and sewage treatment. His urban development minister said last week in Paris that the plan would "ensure sustainable development and economic growth."

"In terms of sea level rise, we really are at a very critical juncture. But we continue to build housing and infrastructure along the coast. Society does not seem to be cognizant of the risks," said Rishi Aggarwal, an environmental activist and fellow with the Observer Research Foundation in Mumbai.

Chennai is still drying out from monsoon floodwaters that subsumed the southern Indian city last week, largely due to chaotic urban planning that compromised its storm drains. The city's international airport, which sits on a dry river bed, was forced to close for days. Ten years earlier, the same thing happened in Mumbai, where both the old and new airports are also built over flood plains.

"If something like the 2005 floods in Mumbai could not wake up the city, it's hard to imagine what it will take," Aggarwal said.

If the Paris climate talks cannot steer the world from its current path toward a 4 degree Celsius rise in temperatures, sea rise will subsume coastlines that are now home to 470 million to 760 million people, according to a November study by the nonprofit research and news organization Climate Central.

Asia has seven of the 10 megacities with the highest number of people at risk of being displaced, the report says: Shanghai, Hong Kong, Kolkata and Mumbai, Dhaka, Indonesia's Jakarta and Vietnam's Hanoi.

Businesses worried about risks to production and profits are pushing hard in Paris for strong action. Banks have pledged green energy funds. Companies are promising to go carbon neutral.

"The interests of governments, the private sector and cities are aligning as never before," U.N. climate chief Christiana Figueres said Sunday in Paris. "We are witnessing the turning point in the way the global economy prices pollution and invests in real wealth."

The stakes are high. In Southeast Asia alone, the Asian Development Bank expects climate change to cause losses that will reduce the region's potential GDP by 11 percent in this century.

But there's a flip side to the gloomy projections. Countries and businesses that are preparing for climate change could reap considerable financial benefits.

"When there's an improvement, it enhances the competitive of those cities," said Tatiana Gallego-Lizon, director of the bank's division on urban development and water.

She cited sewage improvements in Kolkata and drainage systems in Hanoi as helping those cities appeal to investors. "If you plan it and market it properly, it could provide a very special boost for the economy."

Shanghai, where the annual rainfall is about 20 percent higher than the global average, is already faced with occasional severe flooding. But while it has one of the highest populations at risk of climate-induced displacement, it also scores well on some lists ranking its capability to cope.

The city has constructed more than 520 kilometers (320 miles) of protective sea walls virtually encircling half the city to protect from typhoons and also to guard against rises in sea level over the coming century. The system of concrete walls and ramparts around the city is bolstered by a mechanical gate that rises and falls to regulate the amount of water that Suzhou Creek feeds into the Huangpu River which runs through the city.

"The controls we have in place already should be able to deal with the next 20, 50, even 100 years of rising sea levels," said Zhang Zhenyu, spokesman for Shanghai's flood control headquarters.

Standard & Poor's Ratings Services has estimated that climate change, and specifically increased flooding and stronger storm surges, will lead to an average decline of 1.2 notches in sovereign credit ratings, based on direct damage data projections from global insurance giant Swiss Re.

Developed nations have relatively low risk, due to "their higher level of preparedness," S&P's Marko Mrsnik and Swiss Re's David Niklaus Bresch wrote in a Dec. 3 blog for the International Chambers of Commerce. But "in terms of income, emerging and low income sovereigns seem the most vulnerable."