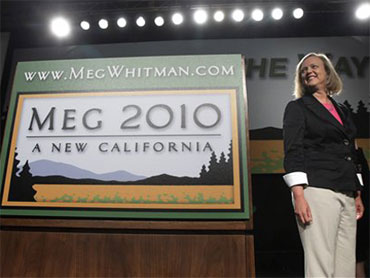 Whitman took a large lead in the polls in the final weeks of the campaign after a negative ad war over which Republican was the most conservative.

"Whitman won't be shy about continuing to spend her personal fortune in her quest to replace Arnold Schwarzenegger in the governor's mansion," said CBSNews.com political reporter Brian Montopoli.

The contest was the most expensive primary in California history, with Whitman spending more than $81 million and state Insurance Commissioner Steve Poizner spending $25 million.

Whitman, who has never before run for elective office, is the first woman to win the Republican nomination for governor in California.

Brown, governor from 1975-83, was unopposed in the Democratic primary.