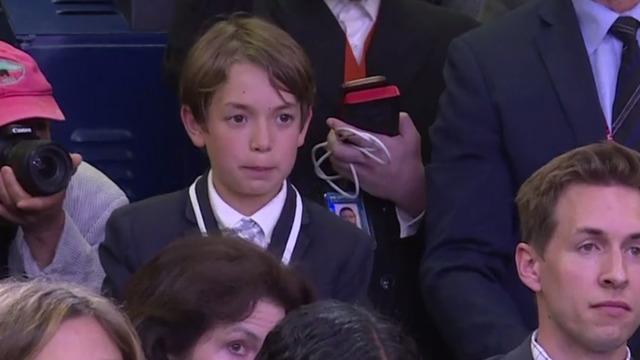 A child asked press secretary Sarah Huckabee Sanders about mass shootings in schools during Wednesday's White House briefing. The boy, Benje Choucroun, was there on behalf of Time Magazine's magazine for children, "Time for Kids."

"At my school we recently had a lockdown drill. One thing that affects mine and other students' mental health is the worry about the fact that we, or our friends, could get shot at school," Choucroun said, reading his question from a piece of paper. "Specifically, can you tell me what the administration has done, and will do, to prevent these senseless tragedies?"

Sanders appeared to hold back tears as she responded the question.

"I think that as a kid and certainly as a parent there is nothing that could be more terrifying for a kid to go to school and not feel safe," she said. "So I'm sorry that you feel that way."

Most recently, a 17-year-old suspect is accused of killing 10 people and wounded an additional 10 on May 18 at Santa Fe High School in Texas. That followed the even deadlier Parkland, Florida school shooting in February, which killed 17 people and spurred a student-led movement calling on Congress and the Trump administration to implement new gun control measures.

"This administration takes it seriously," Sanders said, getting more choked up. "And the school safety commission that the president convened is meeting this week again, an official meeting to discuss the best ways forward and how we can do every single thing within our power to protect kids in our schools and to make them feel safe and to make parents feel good about dropping them off."