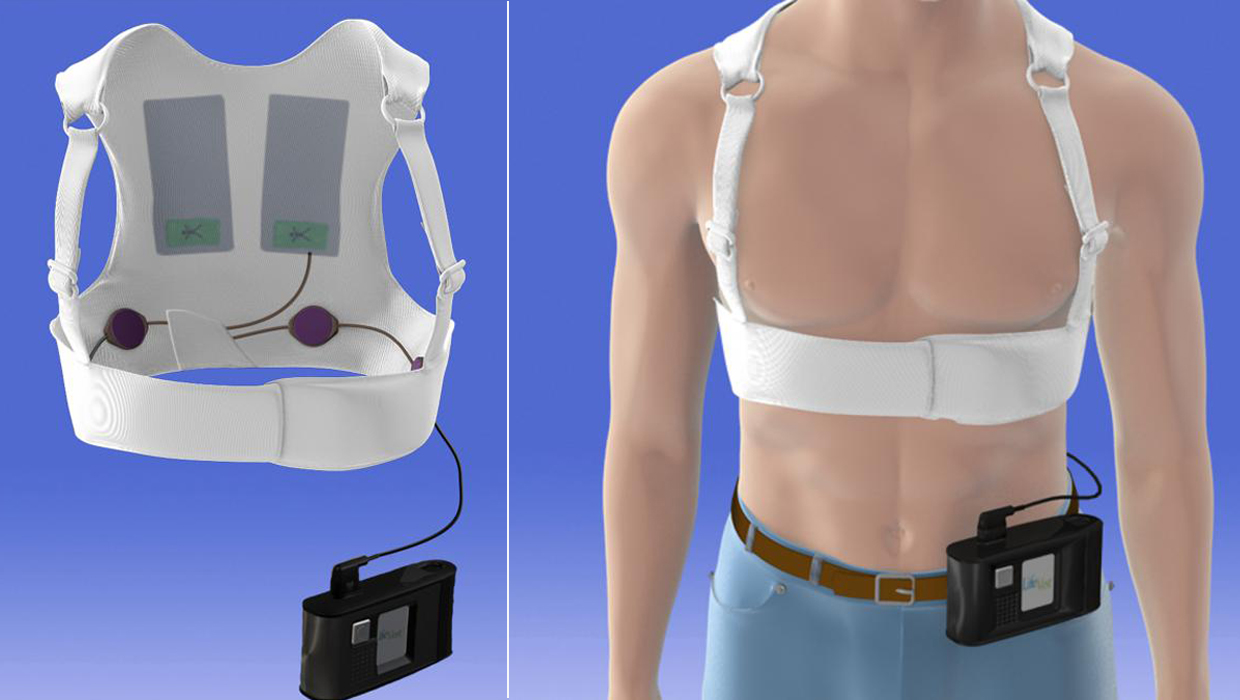 A vest containing a defibrillator may be an option for some heart patients who can't use an implantable defibrillator -- the device that can shock the heart back to a proper rhythm if needed.

That's the conclusion of the first science advisory on the devices just issued by the American Heart Association. The advisory, however, cautioned that there are still big gaps in knowledge about the devices and they should only be used as a short-term option for specific patients.

"They serve an important niche, but there is relatively limited evidence about their effectiveness and safety," said the advisory's lead author, Dr. Jonathan Piccini, an associate professor of medicine at Duke University Medical Center in Durham, N.C.

"We need research and clinical trials to figure out which patient populations they should be applied to and what the relative benefit is," he added.

The wearable defibrillator is worn under clothes and looks like a "a glorified fishing vest" that connects to the body via electrodes, Piccini said. It comes with a laptop-sized battery. If it detects a dangerous abnormal heart rhythm, the vest will alert the patient by sounding alarms that become louder and louder. If the patient doesn't press a button to tell the device that it's a false alarm, "it senses something life-threatening," he said.

It's not clear how many patients have used wearable defibrillators compared to getting them implanted, but Piccini said the number is small.

It's also not yet clear who would benefit from this device. A randomized clinical trial is now underway.

Research has shown that the device properly shocks people between 90 percent and 100 percent of the time, according to the advisory. About 1 percent to 2 percent of patients get shocked when they don't need to be.

The advisory noted that some patients appear to benefit from the wearable devices because they aren't good candidates to get an implanted defibrillator. In these cases, Piccini said, these devices serve as a "bridge" to an implanted version.

Those who may benefit include heart patients with infections of the heart or blood stream, those who've had their defibrillators removed because of infection, and women who develop weak hearts after giving birth or during pregnancy, he said. The devices may also be appropriate in the short term if a physician is trying to figure out if an implanted defibrillator is the right option for a patient, he added.

Insurance companies typically cover the device, which is generally used for 30 to 90 days, Piccini said. "If it's any longer than that, there's an assumption that the patient would benefit from an implanted device. But I have a patient who's been using it for over nine months," he added.

Not surprisingly, patients often don't like the wearable device, and more than 20 percent stop using it due to discomfort or adverse reactions, the advisory said. "Just imagine wearing a fishing vest under your shirt all the time," Piccini said. "It generally is inconvenient, bulky and uncomfortable."

Dr. Byron Lee, a research director at the University of California, San Francisco's Division of Cardiology, is helping lead the first large randomized study of the wearable defibrillator.

He said patients should only take the device off to bathe and during sex. "Sometimes, patients have trouble learning to sleep with it," he said. In addition, "you should not have sex with the wearable defibrillator since this may trigger an unnecessary shock. In general, we recommend patients take it easy when using the wearable defibrillator. Walking and light exercise are fine."

Lee said the heart association's advisory will likely help people get insurance coverage for the device. "Insurance companies have questioned whether the wearable defibrillator should be covered," Lee said. "This statement validates its use in specific patient populations."

Dr. Evan Levine, a cardiologist with Montefiore Medical Center in New York City, is a critic of the extensive use of the device. He believes it's a reasonable treatment for patients who've had to have their implantable defibrillators removed due to infection. But he questions its use on patients who aren't eligible to get an implanted device because inexpensive medications are just as effective.

They get "a device that no one can say saves lives," Levine said, "and are not prescribed the very effective and inexpensive medications that clearly do save lives."

The study appears in the March 28 issue of the journal Circulation.