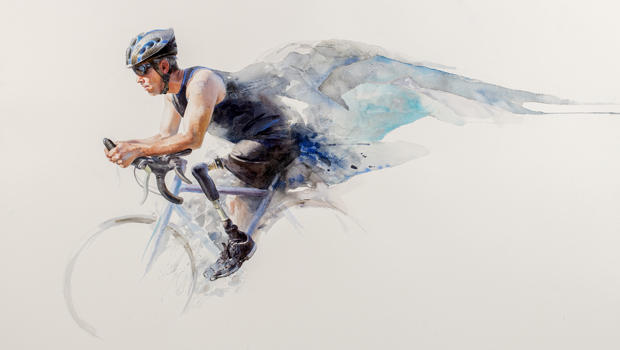 Setting out to paint 50 veterans from 50 states, Mary Whyte traveled the country at her own expense, sketching, interviewing, photographing along the way. The paintings took her seven years to complete, and were unveiled two weeks ago in Charleston, South Carolina, where Whyte lives.

She knew she wanted a Native American to represent South Dakota. She painted Kella Withhorn in her handmade Lakota regalia.

"This is because of my military service," Whitehorn said. "So, it's been created for me, nobody else. The flags represent the military and the patriotism."

She joined the Army at 20, assuming college wasn't an option. "When I left home, I was such a shy kid. I never flew on a plane, didn't know how to get on an escalator, I was just scared to death. And being in the military just opened my eyes to the world. I got to meet all kinds of people, and it helped me grow."

Now she has a master's degree, and is a budget analyst for the federal government.

There is Ed, from North Carolina, who served in two branches of the military. He lost a leg during his service. He told Whyte, "Mary, I had 17 great years, and one really bad day."

There is Winston Scott, who served in the Navy for more than 25 years as a captain, and later at NASA performed three spacewalks.

Hiroshi, from Maui, is one of two World War II veterans in the show. He tried to enlist right after Pearl Harbor was bombed, and was turned away because he's Japanese-American. "But then a year later, he was allowed to enlist," Whyte said.

The veterans pictured are as diverse as the nation they served. That was Whyte's intention when she began the project she called "We the People."  "I thought, what if I painted all of America?' I do believe that our veterans are our greatest patriots — anyone willing to lay down their life for our country, that's what truly makes a person most American."

The veterans and their families were offered free trips to Charleston for the opening festivities. More than half attended. Like graduating seniors passing around their yearbooks, they signed the exhibition catalogs they were given.

The paintings all have backstories.

Roselyn Lionheart and David Leonard, street musicians in New Orleans, both joined the Air Force to get away from home, to find themselves. They found each other.

"Amazing; it touched me coming from where I was," said Joanie Gabrouel, a single mother who worked construction in the Army. She joined to support her kids, and deployed twice to Afghanistan. She ended up homeless when she got out, until a job using the skills she learned turned her life around.

Stories of the benefits of service, side-by-side with its costs.

Casey Maidl is a firefighter and paramedic in Bend, Oregon, and was a Green Beret in Afghanistan.

"When I first came back before my symptoms appeared, like most veterans, at the time you feel invincible. You had this experience, you served your nation," he said. "But, my PTSD symptoms caught up to me, and they've made it extremely challenging to remain in public service."

"But you have," said correspondent Martha Teichner.

"I've struggled to do it. Driving a fire engine, the loud noises, working on the 4th of July, it's very triggering because of the fireworks."

Maidl's lifeline is his service dog, Bannar, named for a close friend who served with him and died in action.

Teichner said, "Your mental and physical health were your gift to your country. Was it worth it?"

"I'm proud to have served my country," Maidl replied. "I just need to be taken care of."

For 40 years, John McDonagh has been a New York City cabbie. He joined the Army when he got out of high school in 1974, and hated it. Now he fights for veterans against war. He said. "They're trying to privatize some of the veterans hospitals. So, I go to demonstrations for that.

"The disdain I have is for the politicians who send them to some of these needless wars that we're involved [in], never-ending wars."

Fifty pictures, fifty takes on what it means to be a veteran, that Mary Whyte hopes is a truthful portrait of America. "If there was anything they all had in common, it would be this overall sense of wanting to do something not for themselves but for others, this cause greater than self," she said.

Which is why Captain Richard Colonna became a teacher when he retired from the Navy after 22 years. The highlight of his career: commanding the USS Austin. he wore his uniform with pride, just as he does now reviewing his Navy ROTC students, to set an example about character, patriotism, and service.

"When you wear that uniform, you're carrying your country on your back," he said. "You're draping that flag over your shoulders, and you're representing those freedoms and democracy around the world."