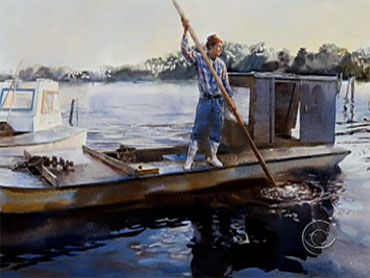 Mary Whyte is the artist of record of a changing world . . . a world she's captured in a style all her own, as Martha Teichner will now show us:

Mary Whyte arrived early enough to take Gary Douglas's picture, outside by his sign, before the rain really started coming down.

"OK, we're going to cut our music off now; I think it's time to get started with our feature for the night," he said.

The only movie theater left for miles around Lewisburg, Tenn., an honest-to-goodness "Last Picture Show," not much different from the way it was in the 1940s.

For the last three-and-a-half years, Whyte has been traveling around the South painting its endangered species . . . holdouts, like Gary Douglas, whose way of life is disappearing.

"Has anybody every drawn you before?" she asked Douglas.

Her subjects tend to be people nobody's ever drawn.

"It's always because there's a story that I think needs to be told, that all of these people are living a life that I think is unique and important," she explained.

The sketches, the quick watercolors, are just the beginning.

"Getting a likeness is the easy part," Whyte said. "Making a good painting that endures, that speaks forever (you hope), is the difficult part."

The first of such pictures, called "By a Thread," came after Mary Whyte saw a newspaper article about a mill closure. And one thing led to another . . . and another . . . and then another. She's up to 30 paintings now.

To watch Martha Teichner's report click on the video player below.

Whyte found one of the South's last funeral bands in Miami.

"And they came over one by one and leaned up against a tree and played for me," she said. "How wonderful is that?"

She pays her subjects a little for their time

Whyte's final paintings are watercolor . . . yes, the same kind of paint you sloshed all over drawing paper in second grade, hard to believe.

"People are often surprised when they walk into my studio, and they say, This is it? I mean, it's basically a plastic tray with the colors around the edges and you add water to it."

For a couple of months each year, Mary Whyte leaves her home and studio near Charleston, S.C. She packs up her art supplies and her radio and moves into an old millworker's cottage upstate in the little town of Simpsonville.

"It's empty, so it means all I have to look at and think about are my paintings," she said. "So, all I do is paint and eat and sleep."

Every day, just before noon she goes next door to the home of Doug and Billie Hogg, her landlords.

What she finds is a feast in the making.

Doug Hogg was a supervisor at the local textile mill (like so many others, shut down now). But the routine remains.

"It's three generations here that meet daily for meals, that all work in the garden, all work to grow the produce in the garden and to raise the bees here," Whyte said.

It was because of their bees that Whyte sought them out in the first place, early on in her project. Doug Hogg and his daughter, Jane, don't say much as they tend the hives. They don't need to.

"The wearing of the white, the whiteness of these shapes, this smoke and the fact that they smoke and they move slowly, to me is dreamy," Whyte said.

Eventually, the Greenville County Museum of Art will exhibit Whyte's work. Many of her completed paintings are being stored there now in the frames her husband made by hand. They were hung for us to see.

Whyte showed us her painting of Algie Varn: "He has spent his entire life crabbing and oystering, and he was kind enough to take me out onto his boat. That day, about one-third 3 of the traps had been poached or vandalized. So I watched this man vacillate that day between anguish, despair and rage."

The next time she called him, he had gone out of business.

She showed us another painting she'd started in New Orleans: "I wanted to find a shoeshine man. Eventually I found my way to Mr. Noah here, who was in one of the big hotels on Canal Street.
And he's been doing this, shining shoes, since he was five years old.

Near Bishopville, S.C., Whyte stopped a cotton picker who could only pose for a minute or two, because he had to get back to work. Just down the road, at a diner, she met the subjects of the painting she calls "Fifteen-Minute Break."

"What they do is they clean industrial ovens," Whyte explained. "They're tired. This is for them a 16-hour day. That's what I found so interesting and meaningful and attractive to do this painting, is that I wanted this absolute weariness of these men."

And in "The Lovers," it was her Berea, Ky., quilter's skin that fascinated her.

"The skin has this wonderful translucent quality where you can see, particularly as a person ages, and I believe that the hands are truly a person's resume of their life," Whyte said.

In Mary Whyte's hands, the resume of a region is brought to life . . . with a plastic tray, some color and water.

The exhibit "Mary Whyte: Working South" will open March 2, 2011 and run through October 2, 2011 at the Greenville County Museum of Art in Greenville, S.C.

One couple's remarkable escape from slavery