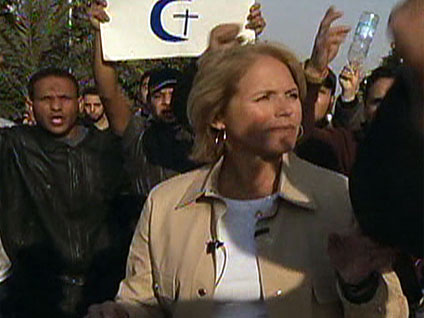 As pro- and anti-government protesters clashed violently in Cairo Wednesday, some U.S. journalists found themselves the target of the unruly crowds.

CBS News reporters in Cairo said that it's not safe for journalists to be out in the crowds, and CBS News anchor Katie Couric reports via Twitter that protesters supporting Egyptian President Hosni Mubarak are "very hostile" and wouldn't let crews shoot video.

(See Couric attempt to report from the street in the video below.)

CBS News chief foreign affairs correspondent Lara Logan reported from a hotel in Alexandria that the military prevented CBS News from filming, and marched the camera crew back to its hotel at gunpoint.

"When our crew went out to film beauty shots early this morning with no idea the situation was now different, they were confronted by soldiers and plainclothes agents ... intimidated and bullied and in fact marched at gunpoint through the streets all the way back to our hotel," Logan said. "It was a very frightening experience, one that was repeated throughout the day for us."

Logan said that the crew is basically "trapped in our hotel room."

"We can go out without cameras, but even then we are being watched everywhere that we go and we are being confronted," she said. "We are definitely being prevented from telling the story. People are increasingly afraid to talk to us."

CBS News correspondent Mark Strassmann provided a first-hand account about being attacked near a checkpoint close to Liberation Square with a photographer who was sprayed with mace:

"[The photographer] was ahead of me when we were suddenly attacked. His small camera was in his pocket, but we stood out as Americans. People began pushing and shoving both of us, especially him. We've been in these situations enough to know you just try to get out as quickly as you can. But we were trapped. From behind, I saw him get pushed and shoved, and then three separate people ran up to throw punches at him as he ducked to get out of the melee. He later told me he had also been maced.

"Suddenly both of us were being pushed and carried along by a wave of people, but these were the good guys. They were trying to get us out of harm's way. They formed a human shield around each of us, but kept us moving, away from the point where the guys throwing punches had suddenly pounced."

Strassmann and the photographer are both fine and back at a hotel.

U.S. Assistant Secretary of State for Public Affairs Philip J. Crowley tweeted, "We are concerned about detentions and attacks on news media in #Egypt. The civil society that Egypt wants to build includes a free press."

Other media outlets reported having problems. CNN's Anderson Cooper tweeted that he was kicked and punched repeatedly.

ABC's Christiane Amanpour also had trouble covering the story. Thugs surrounded Amanpour and her crew shouting "We hate Americans" and "Go to hell," she said, according to the Associated Press.

When Amanpour and her crew decided to leave, their car was surrounded by a group that began rocking and pounding on the car. Someone threw a rock that shattered the windshield but the ABC team was not hurt.

"It's difficult to know what is happening, and I'm only one observer, but to me these seem to be organized thugs sent in to crack heads, chase out journalists, intimidate the pro-democracy forces and perhaps create a pretext for an even harsher crackdown," Kristof blogged for The New York Times.

The Associated Press reports that two of its correspondents were roughed up, and that a Belgian journalist was "beaten, detained and accused of spying by unidentified people in civilian clothes."

Four Israeli journalists were arrested by Egyptian military police in Cairo, the Jerusalem Post reported. Three of those arrested work for Channel 2 and the fourth is from Nazareth.

The Jerusalem Post also reported that two Swedish reporters were detained and accused of being Mossad spies.The soldiers reportedly attacked the reporters, spit in their faces and threatened to kill them.

Al Jazeera's producer in Cairo is reporting that the Hilton Hotel staff are checking all the rooms for cameras and then the security is confiscating them. Hamish Macdonald, a correspondent for Ten Network in Australia tweeted that their hotel security had told them no cameras were allowed to film on hotel balconies.

Pan-Arab broadcaster Al Jazeera had earlier called for help from Egyptian bloggers and others after their Cairo office was shut down Sunday by authorities who complained its round-the-clock coverage was slanted toward protesters and could encourage more unrest.

"Protesters are hunting down Al Jazeera journos," tweeted Abbas Al Lawati of Gulf News in Dubai. "I keep having to clarify that I'm not one of them."

White House spokesman Robert Gibbs said the U.S. is "deeply concerned"about the attacks on the media and peaceful demonstrators.

"We repeat our strong call for restraint," Gibbs said.

The Committee to Protect Journalists said that the Egyptian government was "employing a strategy of eliminating witnesses to their actions," and kept an updated list of journalists who had come under physical assault. Paris-based Reporters Without Borders said "infiltrated policemen" had joined the assaults. The Associated Press reports that the Egyptian government denied the allegations.

"The government has resorted to blanket censorship, intimidation, and today a series of deliberate attacks on journalists carried out by pro-government mobs," said CPJ's Middle East and North Africa Program Coordinator Mohamed Abdel Dayem. "The situation is frightening not only because our colleagues are suffering abuse but because when the press is kept from reporting, we lose an independent source of crucial information."

Government spokesman Magdy Rady said the assertion of state involvement in street clashes and attacks on reporters was a "fiction," and that the government welcomed objective coverage.

"It would help our purpose to have it as transparent as possible. We need your help," Rady said in an interview with The Associated Press. However, he said some media were not impartial and were "taking sides against Egypt."