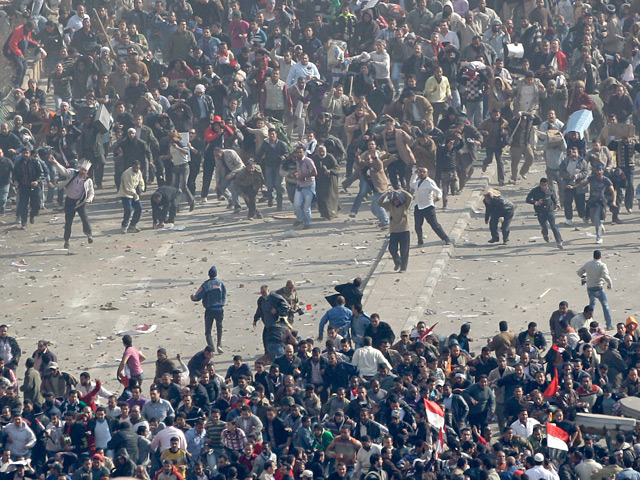 Throughout the downtown area around Liberation Square, pro-Mubarak and anti-Mubarak groups are squaring off. Both sides are anxious and angry. In some cases, they're just shouting at each other. But there's a lot of spontaneous combustion, people suddenly throwing punches and throwing rocks, spoiling for a fight.

A photographer colleague and I tried to go through our ususal checkpoint this afternoon, just off Liberation Square. Mubarak supporters mobbed the area, where only a day before, anti-Mubarak protestors had organized themselves into a security line, checking ID's and backpacks. Reportedly, some of these Murabak supporters live in Cairo's rougher neighborhoods, and have been paid to confront Mubarak's protestors.

We tried to approach one checkpoint, between a pair of army tanks. This crowd of several hundred people were shouting loudly. There was clearly a sharp edge to the moment. My colleague was ahead of me when we were suddenly attacked. My colleague's small camera was in his pocket, but we stood out as Americans. People began pushing and shoving both of us, especially him. We've been in these situations enough to know you just try to get out as quickly as you can. But we were trapped. From behind, I saw him get pushed and shoved, and then three separate people ran up to throw punches at him as he ducked to get out of the melee. He later told me he had also been maced.

Suddenly both of us were being pushed and carried along by a wave of people, but these were the good guys. They were trying to get us out of harm's way. They formed a human shield around each of us, but kept us moving, away from the point where the guys throwing punches had suddenly pounced.

When we were safely in the clear, one of our rescuers told us, in English, "Please don't go back there again."

We're both back at the hotel and fine.