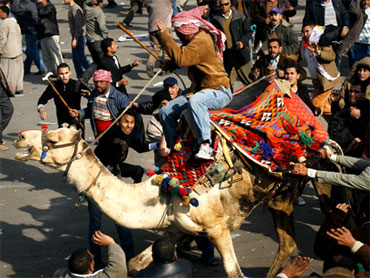 White House Press Secretary said in an email Wednesday morning that the United States is "deeply concerned" over reports of escalating violence by pro-government protesters in Egypt.

"The United States deplores and condemns the violence that is taking place in Egypt, and we are deeply concerned about attacks on the media and peaceful demonstrators," he said. "We repeat our strong call for restraint."

CBS News' Katie Couric wrote on Twitter that protesters demonstrating on behalf of embattled Egyptian president Hosni Mubarak are "very hostile" and would not let her crew shoot video.

(See Couric attempt to report from the street in the video below.)

According to George Hale, CNN's Anderson Cooper was "punched 10 times in the head as pro-Mubarak mob surrounds him and his crew at Cairo rally." (Hale later wrote that Cooper and his crew were fine.)

"Pro-#Mubarak thugs at #Tahrir v hostile to journalists. Several journalists attacked. I was threatened but am fine," he added. And: "I saw some people who were motionless and seemed badly injured. Hard to know casualties, but they're adding up."

"#Mubarak seems to be trying to stage a crackdown not with police or army, but with thugs," Tweeted Kristof. "They are armed and brutal."

News network Al-Arabiya reported that one of its correspondents had been hospitalized following an attack on him and his crew.

One of the most chilling Tweets came from Abbas Al Lawati: "Just saw a foreign journalist being chased by a mob with weapons. He was alone. They got him. God help him."

"We are concerned about detentions and attacks on news media in#Egypt," he wrote. "The civil society that Egypt wants to build includes a free press."