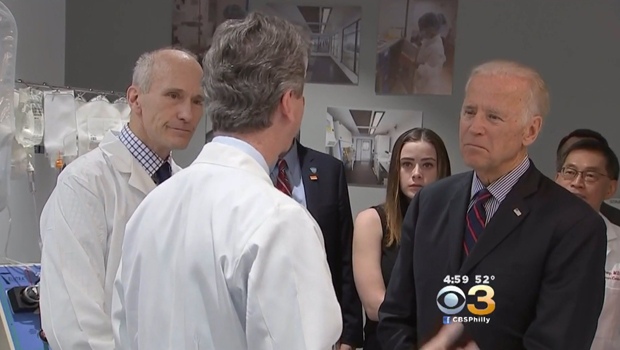 PHILADELPHIA -- Vice President Joe Biden launched a "moonshot" initiative Friday to hasten a cure for cancer, aiming to use his final year in office to break down barriers in the medical world he says are holding back progress on eradicating the dreaded disease.

Biden chose Penn Medicine's Abramson Cancer Center in Philadelphia as his venue to call attention to the institute's pioneering efforts on immunotherapy, in which a patient's own immune system is deployed against cancer cells. After touring the facility's Center for Advanced Cellular Therapeutics, Biden sat down with doctors, researchers and academics to discuss recent advances.

"You're on the cusp of some phenomenal breakthroughs," he said. "In my terms -- not your medical terms -- we are at an inflection point in the fight against cancer."

With barely a year left in the White House, Biden has yet to lay out exactly what he'll do that hasn't been done in the half century since President Richard Nixon declared war on cancer.

But Biden said in addition to pushing for more funding, he would use his influence to "break down silos" he says are pervasive throughout the sprawling and fragmented world of oncologists, scientists and benefactors.

Since declaring his "moonshot" to cure cancer in October, Biden searching for answers about what's holding back a cure, with all the meticulousness of a physician diagnosing disease. His conclusion: The hold-up, in large part, lies in the cancer world itself.

"I hope you're not offended, but there are four kinds of politics in America. There's cancer politics," Biden said. He deemed that particular flavor even more vexing than the rest.

Meetings with nearly 200 of them revealed a community rife with competition, territorialism and "stove-piping" of information that's left researchers and their discoveries cloistered in their own corners, aides and others who met with Biden said. His campaign this year will work to encourage more data-sharing about patient data and treatment outcomes.

"My hope is that I can be a catalyst, to oversimplify it, to get everybody on the same page," Biden said.

"Dr. Carl June here at the Abramson Cancer Center has led the development of something called 'CAR T-Cells.' These are actually T-Cells, a type of white blood cell that's removed from a patient, they're engineered in a laboratory to make them much more specific and powerful for a patient's cancer and then infused back into a patient," Schuchter explained.

Schuchter said it's been a revolutionary approach to treating patients with leukemia and a type of blood cancer called myleoma.

The goal, she said, "is to really take this innovative new therapy into some of the more common cancers that have been very resistant to treatment. So we'll certainly highlight our work with CAR T-Cell therapy and different types of immunotherapy."

The White House said 250 patients have been treated with the approach, with early promising results.

Another priority for the vice president is to further "precision medicine," which personalizes treatments based on the genetic makeup of a patient's tumors. Cancer researchers who met with Biden recently said he was intrigued by the possibilities for improving prevention and early detection.

Biden planned to continue the effort next week by convening global cancer experts at the World Economic Forum in Davos, Switzerland. Then he'll chair a series of meetings with Cabinet secretaries in late January about ways to boost federal funds for research and treatment.

For Biden, the emotional undertones of his mission are difficult to avoid. After his 46-year-old son, Beau Biden, died from brain cancer in May, Biden entered a period of painfully public mourning, followed eventually by his decision not to enter the presidential race.

"This is still a blow that he's still recovering from," said former Sen. Ted Kaufman, a Biden confidante for many decades. "He's in his problem-solving mode. He's more comfortable in this area because of his desire to eliminate this thing that caused him so much damage."

When Biden, in a Rose Garden speech disclosing he wouldn't run for president, announced a bid "to cure cancer," more than a few eyebrows were raised. Some wondered whether Biden was unduly raising expectations.

"I'm an eternal optimist, but I'm not going to go around saying we're going to cure cancer in five years. That's just not realistic," said Dr. George Demetri, a Harvard Medical School professor and researcher at the Dana-Farber Cancer Institute who met with Biden's staff.

Even President Barack Obama acknowledged that cancer probably won't be cured in the year, or even the next five. But he predicted that over the next 20 years, the world would see strides "never seen before."

"They key for us now is to put a lot more money into research," Obama said. "If we do, I think we're going to see some really big breakthroughs soon."

Biden acknowledged that some cancers can't be cured, insisting he wasn't naive. But he said he thought it was possible to double the rate of scientific advances.

Because cancer takes hundreds of forms, it can't be eradicated by any single advance. But immense progress has been made in recent years. Survival rates for most cancers are increasing, although the American Cancer Society still predicts nearly 1.7 million new cancer cases this year and nearly 600,000 deaths.

"What does 'cure cancer' mean? Does it mean prevent cancer? Does it mean nobody dies from cancer? I don't know about that," said Sen. Roy Blunt, R-Mo., who has worked with Biden to increase cancer funding. "But I do know that we can enhance dramatically the way we look at cancer, understand cancer and deal with it."