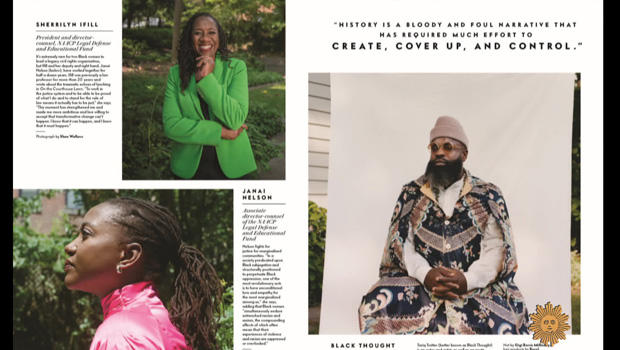 But how does a publication that bills itself as capturing the cultural zeitgeist react to a time of Black Lives Matter?

Radhika Jones, who became Vanity Fair's editor-in-chief in 2017, said, "I felt when I took the title over that the culture really was moving very strongly in a direction that was more diverse.

"I think, as an editor, you know, you're always hoping to see around the corner."

"Sunday Morning" contributor Mark Whitaker asked, "So, what made you think that Ta-Nehisi [Coates] was the person who could kind of help you create something really new and distinctive?"

"Well, Ta-Nehisi has been seeing around corners for his whole professional life," Jones replied.

Earlier this year, Jones tapped the bestselling author to guest edit a special issue of Vanity Fair, on newsstands next month. It features contributors of color on almost every page.

Whitaker asked Coates, "What did it feel like to be the boss?"

"Well, I mean, Radhika's the boss!" he laughed. "You know, let's be clear about that. I was lending an assist."

Arguably America's preeminent voice on race, Coates burst onto the national scene as a national correspondent for The Atlantic. His 2014 cover story, "The Case for Reparations," revived a national dialogue about the issue, with Coates even testifying before a Congressional panel on reparations last year.

And his landmark book "Between the World and Me," written as a letter to his son about the dangers of being a Black man in America, has sold more than 2.5 million copies. It skyrocketed back onto many bestseller lists this summer in the wake of George Floyd's killing.

Whitaker asked, "Toni Morrison compared you to James Baldwin. That must have been a pretty heavy [compliment]."

"Yeah, it was," said Coates. "It felt like somebody handed me a responsibility. Obviously I was flattered, I was enormously humbled. But I felt like it was a charge, like somebody said, 'Okay, now you have to …' You know what I mean? Go and fulfill that. Because if you don't, you're gonna be the guy that made Toni Morrison wrong!  How would you like that? You want that to be your legacy? And I don't."

The Vanity Fair issue is called "The Great Fire," inspired by a poem about White Chicagoans in the early 20th century who saw the influx of African Americans as a disaster akin to the fire that nearly destroyed the city 50 years earlier. Coates writes about it in a powerful editor's letter.

Whitaker said, "It's interesting, that metaphor, because at the beginning of the letter, the fire is a threat."

"Yes. It's seen as destructive," Coates said. "By the end, its greatest power is illumination. And what I argue in the piece [is], that's always been, you know, the great power of the Black movement.

"Same thing with these cell phones; it's not like this is new, but suddenly it's illuminated and people can see it. And it absolutely drives folks who don't even experience it crazy. It's hard to look at that, and not do anything," Coates said.

The cover is a portrait of Breonna Taylor, the 26-year-old Louisville woman who was shot and killed in March by police in her own apartment.  It was painted by acclaimed artist Amy Sherald, whose best-known work is the Michelle Obama portrait that hangs in the National Portrait Gallery.

At a time when sales of print magazines are down, Jones hopes this issue becomes that increasingly rare commodity: a keepsake. And as the child of a mother born in India, she takes her responsibility as a cultural gatekeeper seriously.  She said, "You can use the gate to keep people out, or you can use the gate to let people in. And that's, for me, what's been behind this project. It feels so magical to me at this incredibly difficult and strained time in American history to have been able to do that."

Coates will now join Vanity Fair as a contributing editor. He is not known for his optimism about race, but in the multi-racial faces of today's protesters, he sees a reason to believe that this time might be different.

Whitaker asked, "One of the things that people have said about your work is that you offer a powerful indictment of the state of race relations in our country. But you don't ultimately offer solutions or reason for hope. And yet, in your editor's letter, you actually do see hope in this current moment."

Coates replied, "I just wanna be clear about this: I have very little expectation that the powers-that-be in Louisville, in Kentucky, will ultimately hold the people that killed Breonna Taylor accountable. I am filled with a transcendent, transcendent sense of, I would actually call it joy, when I see people who continue to struggle in her name nonetheless. And maybe we're at a moment where some kind of critical mass of people in this country, beyond the community that's actually being affected by it, you know, actually, you know, can see some things that they couldn't see before."