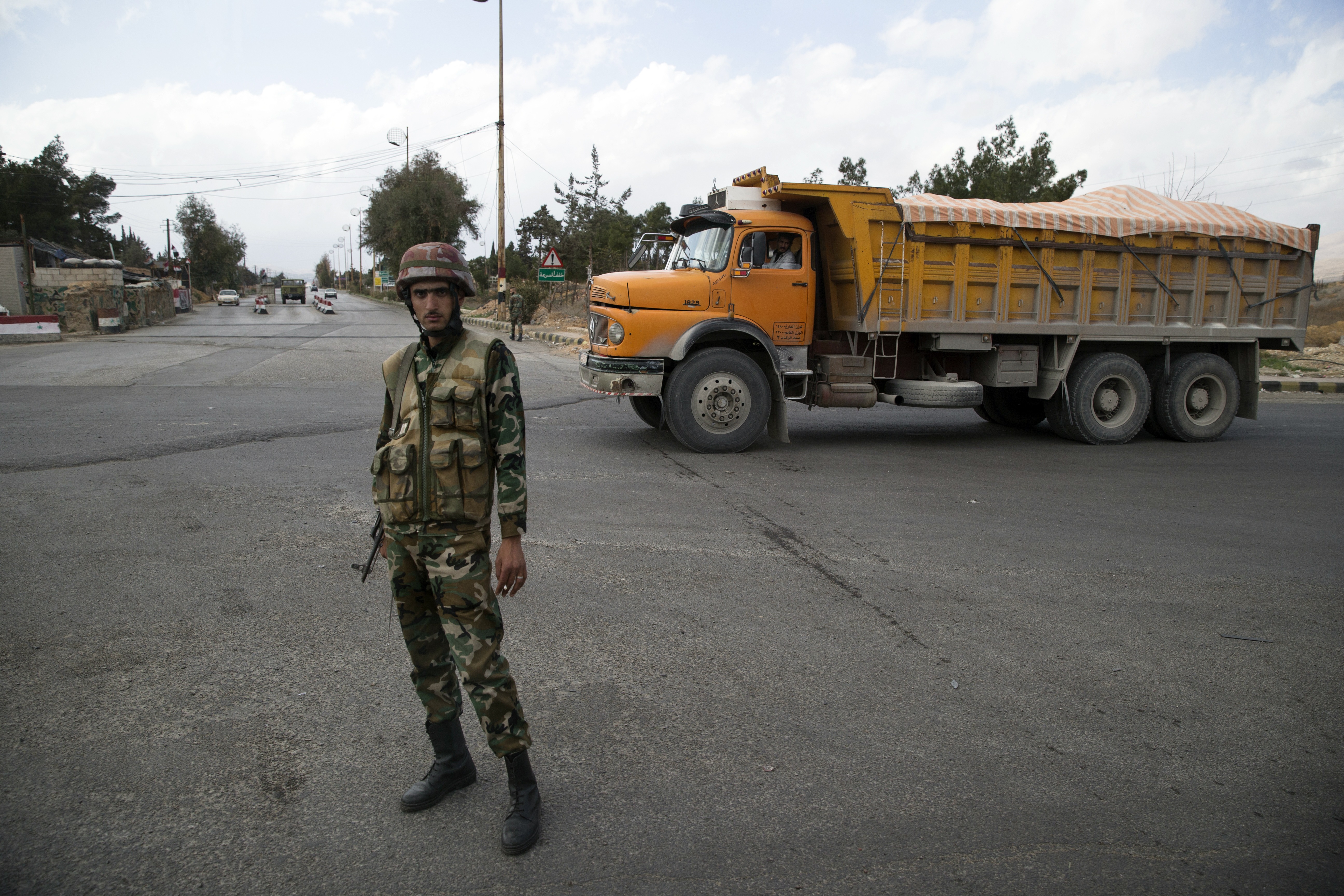 DAMASCUS, Syria -- The United Nations says aid deliveries are under way to the rebel-held Damascus suburb of Kafr Batna.

U.N. spokesman Farhan Haq said a humanitarian convoy reached three areas in Kafr Batna with food and health assistance for 20,000 people on Friday. He said deliveries to the remaining three areas on Monday will provide aid for more than 16,000 people.

Haq said U.N. humanitarian agencies report that the relative calm for almost two weeks under the cessation of hostilities agreement has offered hope to the 6.5 million people displaced inside Syria and more than 4.5 million people who fled the country.

He said U.N. envoy Staffan de Mistura still plans to resume talks between the government and opposition on March 9, even though some participants won't arrive until March 12-13.

Warplanes have bombed a fuel depot in an opposition-held town in northern Syria, killing at least 12 people, monitoring groups say.

The Britain-based Syrian Observatory for Human Rights says the bodies found in the wreckage in the depot in Idlib province, which was struck Monday, are burned beyond recognition. It says it is too early to tell if the casualties are civilians or militants.

The Local Coordination Committees, an opposition network, puts the toll at 15 dead, all civilians.

Violence has eased in the country since sides agreed to a partial cease-fire nine days ago. Under the agreement, parties are still allowed to target organizations the U.N. has deemed terrorist groups, including the Islamic State of Iraq and Syria (ISIS) and Syria's al-Qaida affiliate, the Nusra Front.

Riad Hijab, the head of the High Negotiations Committee, the main opposition coalition, called the attack "a massacre."

CBS News' Elizabeth Palmer found one week of truce can't begin to make up for years of fighting.

For three years rebels battled Syrian soldiers in the heart of Aleppo. By the time the army won, the world had lost one of its greatest cultural jewels -- the city's ancient market.

There are some things that people on either side of this bitter conflict have in common. One thing is the destruction -- which is terrible in the area controlled by the government, and just as bad in territory held by the opposition.

The other things they share are misery and exhaustion.

You see that on every side in Salahuddin, a poor neighborhood right on the front line, where tarps shield residents from the eyes of snipers and families eke out life in the ruins.

The Ganzi family invited CBS News inside. There is no running water or electricity in their tiny apartment. Faiza explains that her son, a soldier, was killed in action.

Without his salary, everyone -- including the five grandchildren -- is surviving on charity.

Downstairs there's a soccer game, where Hamad plays -- he's pretty fast on his crutches now. It's been a year since a rocket strike took off his leg.

He was doing errands with his mom when it happened.

People can still do errands and shop for food in the parts of Aleppo that haven't been smashed to bits. Since the cease-fire, the mood has lightened.

The head of the main Syrian opposition coalition says they will decide later this week on whether to take part in indirect peace talks in Geneva scheduled to resume Wednesday.

Hijab acknowledged on Monday that Russian bombardment has dropped following the partial cease-fire, which came into effect Feb. 27. Yet he added that President Bashar Assad's government has not released any detainees and said the flow of aid to besieged rebel-held areas was too small.

He said that "unfortunately" all Russian airstrikes had been targeting moderate rebels.