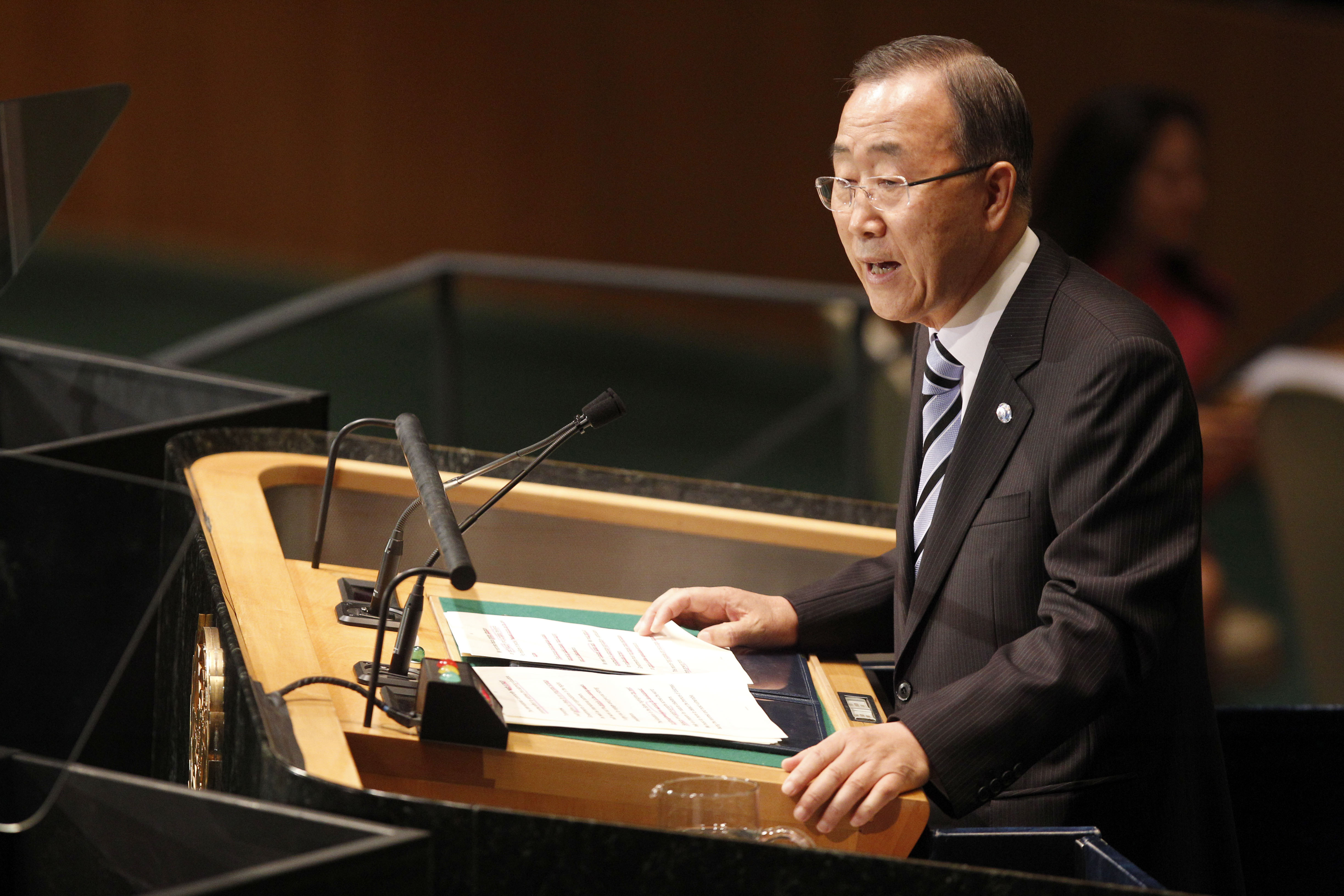 In his state of the world speech at the opening of the U.N. General Assembly's annual ministerial meeting, Ban said he was sounding the alarm about widespread insecurity and injustice, inequality and intolerance in many countries.

Putting the spotlight on Syria, the U.N. chief said "the international community should not look the other way as violence spirals out of control."

Ban said the Syrian conflict is a serious and growing threat to international peace and security that requires attention from the deeply divided U.N. Security Council.

In an address to the U.N. General Assembly later Tuesday, President Barack Obama said the future of Syria "must not belong to a dictator who massacres his people."

"If there is a cause that cries out for protest in the world today, it is a regime that tortures children and shoots rockets at apartment buildings," Mr. Obama said. "We must remain engaged to assure that what began with citizens demanding their rights does not end in a cycle of sectarian violence."

Russia and China have vetoed three Western-backed resolutions aimed at pressuring Syrian President Bashar Assad to end the violence and enter negotiations on a political transition, leaving the U.N.'s most powerful body paralyzed in what some diplomats say is the worst crisis since the U.S.-Soviet standoff during the Cold War.

The secretary-general also expressed profound concern at continuing violence in Afghanistan and Congo, increasing unrest across west Africa's Sahel region where al Qaeda has made inroads, and the "dangerous impasse" between Israelis and Palestinians that may close the door on the two-state solution.

The "shrill war talk" by Israel in recent weeks, in response to its belief that Iran is pursuing nuclear weapons, "has been alarming," Ban said, and Tehran's rhetoric threatening Israel's existence is unacceptable.

"Any such attacks would be devastating," he said, reminding the 193 U.N. member states of the need for peaceful solutions and respect for international law.

"Leaders have a responsibility to use their voices to lower tensions instead of raising the temperature and volatility of the moment," he said.

In an interview with CBS This Morning, Iranian President Mahmoud Ahmadinejad denied his country is developing a nuclear weapon.

"Let's even imagine that we have an atomic weapon. A nuclear weapon. What would we do with it? What intelligent person would - would fight - 5,000 American bombs with one bomb?" Ahmadinejad said, adding that Iranians "do not believe in a nuclear weapon."

He also discussed how Tehran would respond to an Israeli attack on its nuclear facilities and said he did not take Israeli threats seriously.

Alluding to the recently circulated amateur video made in the U.S. which attacks Islam and denigrates the Prophet Muhammad, Ban said that "in recent days we have seen hate speech and violent responses that perpetuate a cycle of blind violence."

He lamented that in the world today "too often, divisions are exploited for short-term political gain" and "too many people are ready to take small flames of difference and turn them into a bonfire."

The secretary-general said it's time for responsible political and community leaders and ordinary citizens to speak out.