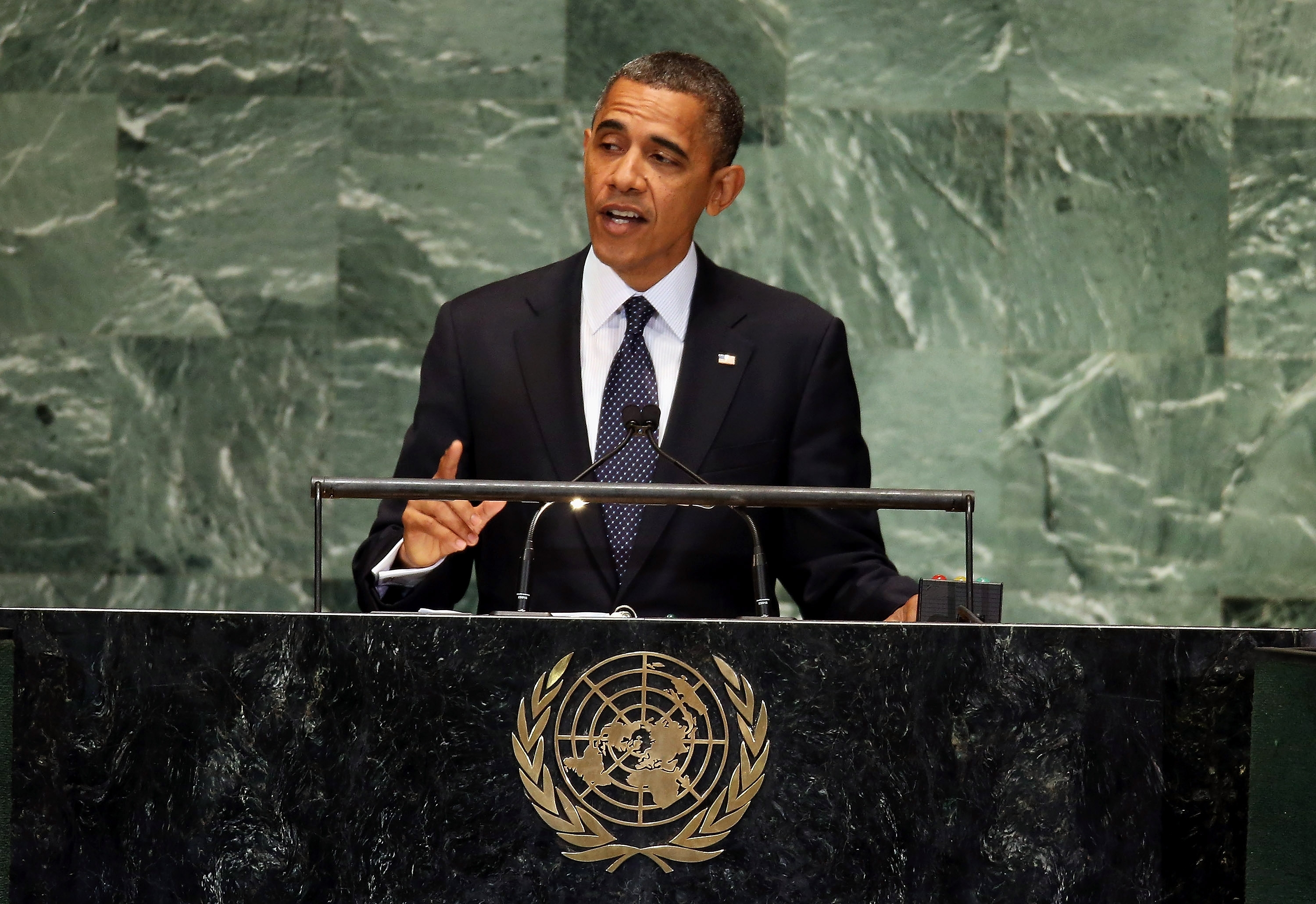 (CBS News) Striking a hopeful but serious tone about the future of the Middle East, President Obama at the United Nations General Assembly on Tuesday called on his international counterparts to directly and honestly confront the sources of unrest in Muslim countries, as well as the tensions between the West and the Arab world.

At the same time, he urged world leaders -- and, no doubt, an American electorate -- to "remember that this is a season of progress."

Mr. Obama hailed the political progress in Tunisia, Egypt and Libya, as well as developments outside the Arab world, as in Somalia and Burma.

"Around the globe, people are making their voices heard, insisting on their innate dignity, and the right to determine their future," he said. "And yet the turmoil of recent weeks reminds us that the path to democracy does not end with the casting of a ballot."

Beginning and ending his nearly hour-long remarks by invoking the memory of U.S. Ambassador Chris Stevens, who was murdered along with three other Americans when the U.S. compound in Benghazi, Libya came under attack, the president laid out the values that America stands for -- the values Mr. Obama said the nation would continue to promote around the world.

For Obama, diplomacy gets back seat to campaignObama has no meetings scheduled with foreign leaders at U.N. General Assembly

"We believe that freedom and self-determination are not unique to one culture," the president said. "These are not simply American values or Western values - they are universal values. And even as there will be huge challenges that come with a transition to democracy, I am convinced that ultimately government of the people, by the people and for the people is more likely to bring about the stability, prosperity, and individual opportunity that serve as a basis for peace in our world."

Mr. Obama touted the United States' support for the different democratic movements that unfolded throughout the Middle East over the past two years, glossing over inconsistencies in the level of support his administration showed for protesters. He noted that the U.S. "insisted on change" in Egypt and was "inspired by the Tunisian protests that toppled a dictator," while failing to mention the United States' lack of support for pro-democracy protesters in Bahrain.

Mr. Obama said, "Just as we cannot solve every problem in the world, the United States has not, and will not, seek to dictate the outcome of democratic transitions abroad, and we do not expect other nations to agree with us on every issue."

Nevertheless, the president declared, "America will never retreat from the world."

Mr. Obama's remarks came just a day after his presidential opponent Mitt Romney charged that the United States' international influence has waned under Mr. Obama's leadership. The president's speech was his last international address before Election Day, and he used the opportunity to highlight ways in which he's advanced American interests on the international stage.

"It is because of the progress I've witnessed that after nearly four years as president, I am hopeful about the world we live in," Mr. Obama said. "The war in Iraq is over, and our troops have come home. We have begun a transition in Afghanistan, and America and our allies will end our war on schedule in 2014. Al Qaeda has been weakened and Osama bin Laden is no more."

Taking an assertive tone against Iran without dictating a specific deadline for action, Mr. Obama warned that the United States would eventually look past diplomacy for a way to contain Iran's nuclear ambitions.

"America wants to resolve this issue through diplomacy, and we believe that there is still time and space to do so. But that time is not unlimited," Mr. Obama said. "We respect the right of nations to access peaceful nuclear power, but... the United States will do what we must to prevent Iran from obtaining a nuclear weapon."

Ahmadinejad: "We do not take seriously the threats" of IsraelIran test-fires missiles, sinks warship-sized target

On Monday, Iranian President Mahmoud Ahmadinejad maintained his country's project to enrich uranium is only for peaceful purposes. Ahmadinejad expressed optimism that Iran could reach a diplomatic resolution with the U.S., but he also berated the U.S. for defending Israel, referring to Israel as a nuclear-armed "fake regime."

Mr. Obama on Tuesday also took the Assad regime in Syria to task, charging, "In Syria, the future must not belong to a dictator who massacres his people."

He said the U.S. will work for "sanctions and consequences for those who persecute; and assistance and support for those who work for this common good. Because we believe that the Syrians who embrace this vision will have the strength and legitimacy to lead."

"The impulse towards intolerance and violence may initially be focused on the West, but over time it cannot be contained," he warned. "The same impulses toward extremism are used to justify war between Sunnis and Shia, between tribes and clans. It leads not to strength and prosperity but to chaos."

He specifically decried the violence across the Muslim world sparked by an American-produced, anti-Islam video. The president clarified that he considered it a "crude and disgusting" video and that it had nothing to do with the views of the U.S. government but noted that "Americans have fought and died around the globe" to protect free speech.

"I know that not all countries in this body share this understanding of the protection of free speech," Mr. Obama continued. "Yet in 2012, at a time when anyone with a cell phone can spread offensive views around the world with the click of a button, the notion that we can control the flow of information is obsolete. The question, then, is how we respond. And on this we must agree: there is no speech that justifies mindless violence."