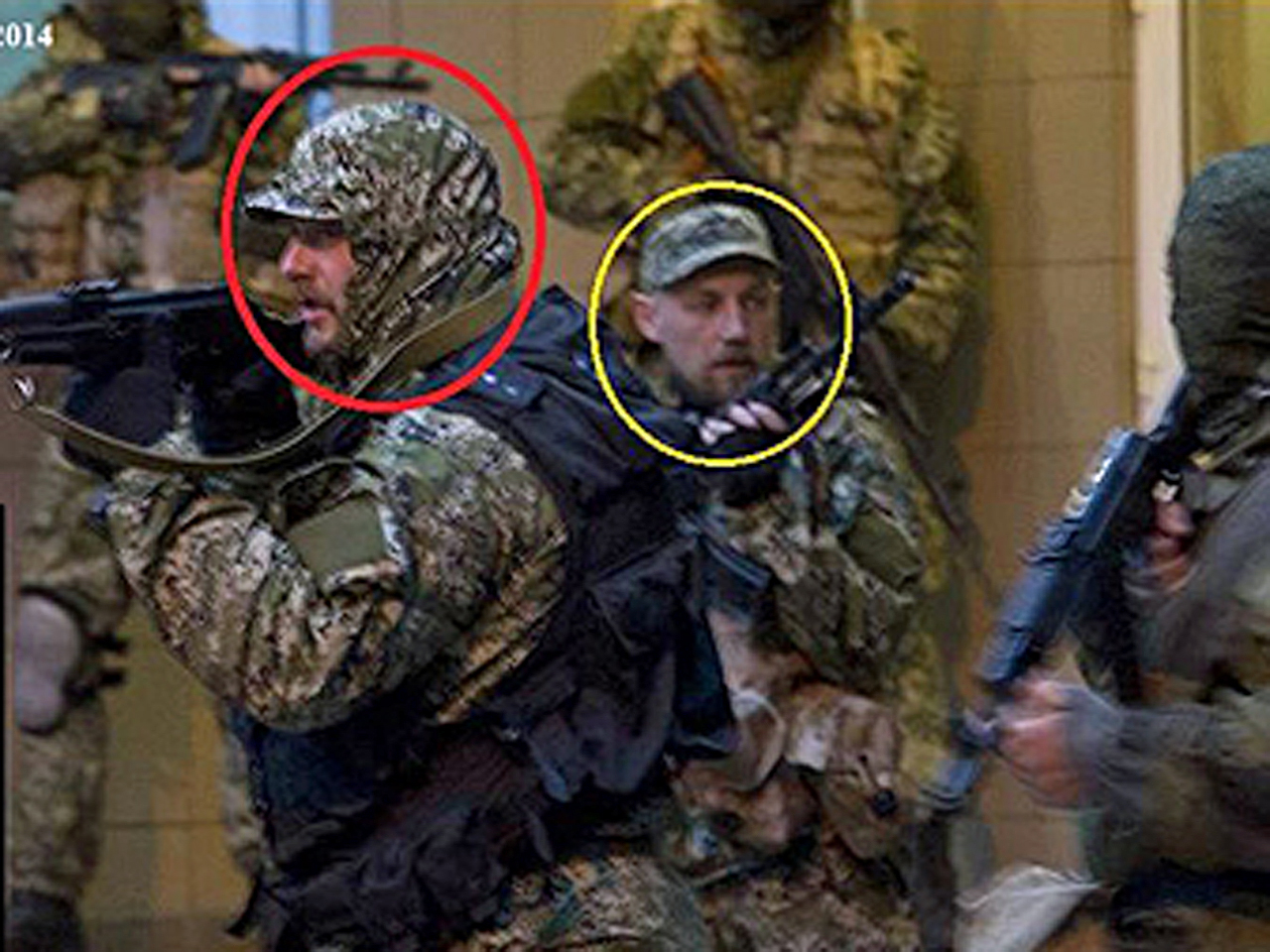 Ukraine's government has handed photographs to allies in Europe and the U.S. to bolster its case that Russian special forces are operating in the eastern parts of the country amid Ukraine's escalating crisis-- something Russian President Vladimir Putin has flatly denied.

In an April 16 letter to the Organization for Security and Cooperation in Europe (OSCE) from Ukraine's ambassador, the new administration in Kiev compiled several photos showing men identified as Russian special forces soldiers taken in the cities of Slavyansk and Kramatorsk.

Both the U.S. and Russia are members of the OSCE.

All the men are pictured wearing the now-familiar green fatigues and military tactical gear which has become familiar in eastern Ukraine, where pro-Russian insurgents have seized local government buildings in as many as 10 different towns in recent weeks.

During a live televised question-and-answer session Thursday, President Putin flatly rejected reports that Russian special forces were taking part in the unrest in the east alongside pro-Russian Ukrainians.

"It's all nonsense, there are no special units, special forces or instructors there," Putin said.

Putin did, however, admit for the first time on Thursday that soldiers in the unmarked green uniforms who swept through Ukraine's Black Sea region of Crimea, laying the ground for its annexation by Moscow last month, were Russian troops.

Putin, who previously said the troops were local self-defense forces, said the Russian soldiers' presence was necessary to protect the local population and ensure holding a referendum, in which an overwhelming majority of its residents voted to secede from Ukraine and join Russia.

One of the photo-sets offered in the letter to the OSCE shows a bearded Russian soldier wearing the insignia of the Russian special forces during Russia's 2008 invasion of Georgia, and then two other photos purportedly showing the same man in Slavyansk and Kramatorsk.

Another composite set of photos shows two alleged Russian special forces soldiers at various locations in the two eastern Ukrainian cities, along with a pair of "family photos" said to be of the Russian special forces' "sabotage and reconnaissance" group in which the same two men can purportedly be seen.

It was unclear how the Ukrainian government obtained the photos, and CBS News could not independently verify their authenticity, or confirm they showed the same men.

The U.S. government does believe they are authentic, and prove what U.S. officials have said all along; that Russia is fomenting the unrest in eastern Ukraine.

"There has been broad unity in the international community about the connection between Russia and some of the armed militants in eastern Ukraine, and the photos presented by the Ukrainians last week only further confirm this, which is why U.S. officials have continued to make that case," State Department spokeswoman Jen Psaki said Sunday, according to the New York Times.

The photos also sought to highlight the fact -- well-documented already by CBS News' own video shot in eastern Ukraine -- that many of the unidentified, well-armed men patrolling the streets in the region, wear the same green camouflage and carry much of the same tactical gear as the Russian troops who Putin eventually admitted to having deployed to Crimea.

The United States and its allies in Europe have warned Putin against stoking the dissidents in the regions north of Crimea, threatening further sanctions if his government does not comply.

A hard-won diplomatic deal hammered out late last week between Russia, the U.S., Ukraine and European Union saw both sides agree to de-escalate the crisis by having militant groups disarm and abandon occupied buildings.

That has not happened; militants in the eastern cities of Donetsk and Slavyansk appeared entrenched on Monday and there was no indication that either side was about to back down.

Russian Foreign Minister Sergey Lavrov blamed the government in Kiev on Monday for "crudely" violating the truce deal after a shooting at a checkpoint manned by pro-Russian militants near Slavyansk left three of the men dead.

Kiev, in turn, suggested the shooting was staged by Russia or pro-Russian forces.