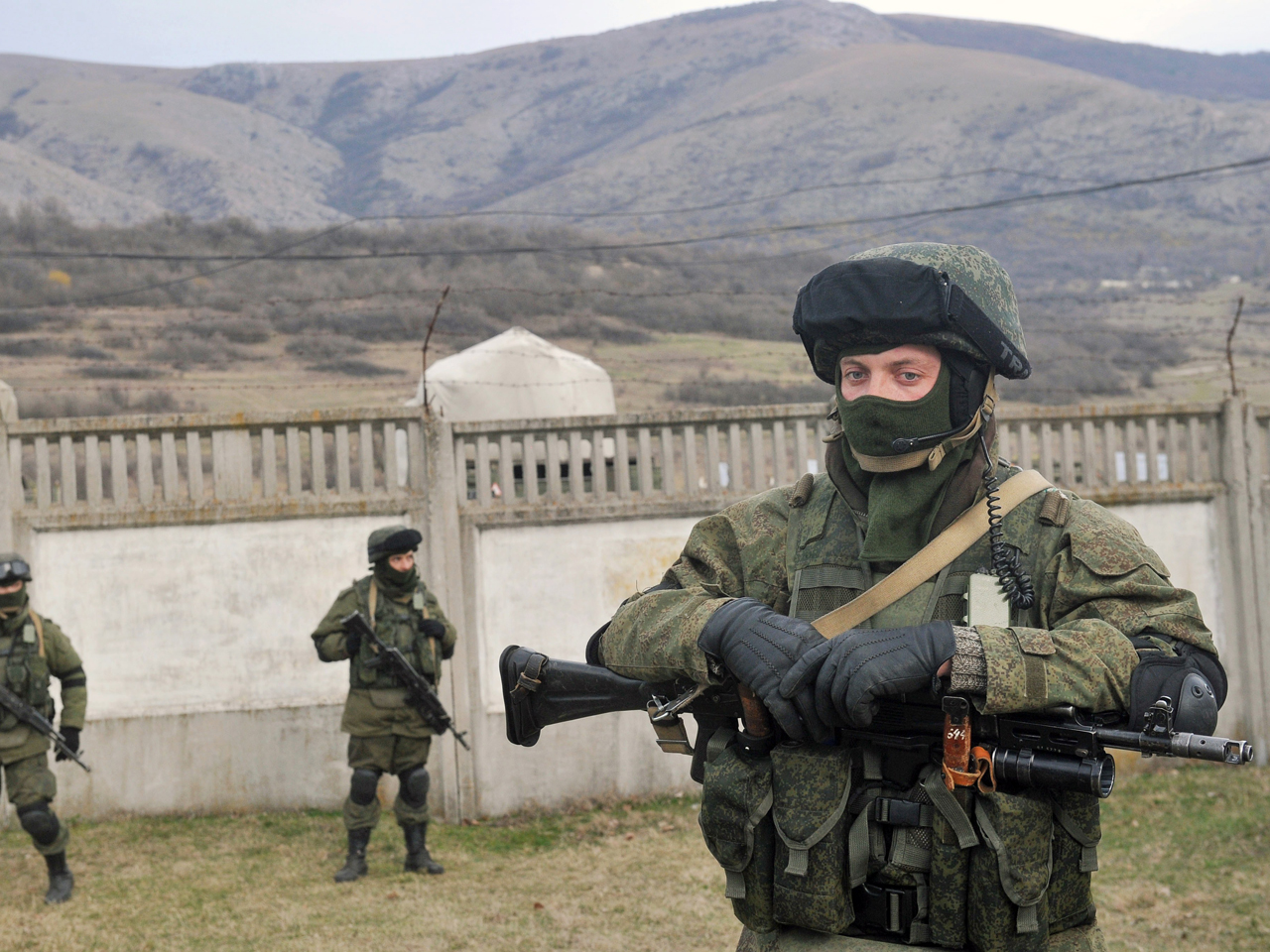 Russia issued fresh ultimatums to Ukrainian forces in Crimea Monday, according to Ukrainian officials, adding to an already tense atmosphere following the occupation of the strategic peninsula by the Russian military.

While Russia has officially denied setting deadlines for Ukrainian surrender of land or military resources, the U.S. State Department said it would hold Russia directly responsible if it has threatened use of force against Ukrainian military. Department spokeswoman Jen Psaki said, however, that she could not confirm if Russia had in fact made such threats.

CBS News correspondent Elizabeth Palmer, reporting from a Ukrainian air base, said that Russian soldiers had been at the base's gate for some time and had demanded that the soldiers leave the base by Monday.

Nobody knew exactly what the implied "or else" meant, and nobody knew what would happen next, but it was very tense, Palmer said.

Most recently, Ukraine said Russian forces are demanding that the crew of two Ukrainian warships must surrender.

Vladimir Anikin, a Russian defense ministry spokesman in Moscow, dismissed the report of a Russian ultimatum as nonsense but refused to elaborate.

"If they do not surrender before 5 a.m. tomorrow, a real assault will be started against units and divisions of the armed forces across Crimea," the agency quoted the ministry source as saying.

Later, the Ukrainian Defense Ministry denied receiving an ultimatum, saying there have only been harassment and acts of intimidation by the Russian military. There was no immediate comment by the Black Sea Fleet.

Similar ultimatums have been issued throughout the Crimean peninsula since Russian troops began moving in en masse over the weekend.

The Los Angeles Times reports the Ukrainian president said the Russian military set an ultimatum Sunday for Ukrainian army and navy units "to surrender weapons and leave their bases" in the Crimean peninsula. Like the incident at the air base, nothing happened when the deadline passed.

CBS News correspondent David Martin reports the biggest mystery to U.S. defense and intelligence officials is Russia's intentions with the estimated 15,000 troops it has already moved into Ukraine. U.S. officials haven't confirmed the latest 5 a.m. ultimatum, but they did say there have been similar ultimatums issued over the weekend, and nothing has happened when the deadlines have passed. There has so far not been any indication the Russians plan on occupying Ukrainian territory outside of Crimea, but Russian troops continue to flow in to the Black Sea peninsula.

Whether the ultimatums come to pass, Ukraine's military admitted Monday that pro-Russian troops have surrounded or taken over "practically all" its military facilities in Crimea - a move that Russia's foreign minister defended as a necessary protection for the ethnic Russians on the Black Sea peninsula.

"This is a question of defending our citizens and compatriots, ensuring human rights, especially the right to life," Russian Foreign Minister Sergey Lavrov said in Geneva, where he was attending U.N. meetings.

There have been no reports, however, of any hostilities toward Russian-speaking in Ukraine during the country's four months of political upheaval.

In Kiev, Ukraine's new prime minister admitted his country had "no military options on the table" to reverse Russia's military move into its Crimea region.

While Prime Minister Arseniy Yatsenyuk appealed for outside help and insisted that Crimea still remained part of his country, European foreign ministers held an emergency meeting on a joint response to Russia's military move that could include economic sanctions.

"Any attempt of Russia to grab Crimea will have no success at all. Give us some time," Yatsenyuk said at a news conference with British Foreign Secretary William Hague.

New reports of Russian moves came in rapid succession Monday. In addition to seizing barracks and border posts, troops also controlled a ferry terminal in the Ukrainian city of Kerch, just 12 miles across the water from Russia. That intensified fears in Kiev that Moscow will send even more troops into the peninsula via that route.

The soldiers at the terminal refused to identify themselves Monday, but they spoke Russian and their vehicles had Russian license plates.

"The Russians are behaving very aggressively, they came in by breaking down doors, knocking out windows, cutting off every communication," he said.

He said four Russian military ships, 13 helicopters and 8 transport planes had arrived in Crimea in violation of agreements that permit Russian to keep its naval base at the Crimean port of Sevastopol.

Now, fears in the Ukrainian capital of Kiev and beyond are that Russia might seek to expand its control by targeting and seizing other parts of Ukraine, especially in its pro-Russian east.

"The world cannot just allow this to happen," Hague said, but he ruled out any military action. "The U.K is not discussing military options. Our concentration is on diplomatic and economic pressure."

Outrage over Russia's military moves has mounted in world capitals, with U.S. Secretary of State John Kerry calling on President Vladimir Putin to pull back from "an incredible act of aggression." Kerry is to travel to Ukraine on Tuesday.

Putin has defied calls from the West to pull back his troops, insisting that Russia has a right to protect its interests and those of Russian-speakers in Crimea and elsewhere in Ukraine. His confidence is matched by the knowledge that Ukraine's 46 million people have divided loyalties - while much of western Ukraine wants closer ties with the 28-nation European Union, its eastern and southern regions like Crimea look to Russia for support.

Looming over the political crisis is Ukraine's teetering economy, with a top economic official saying that it needs at least $35 billion to get through this year and next. Putin had promised a $15 billion loan in December, but Russia has only delivered $3 billion.