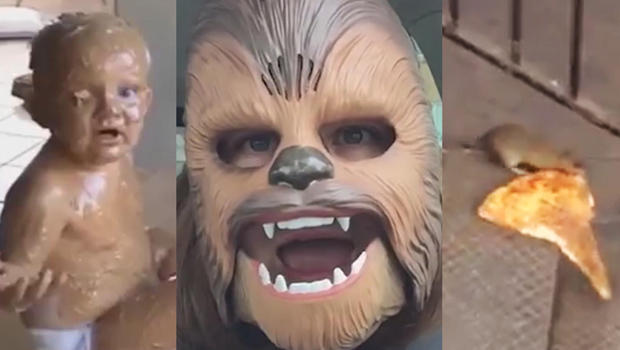 NOW TRENDING is what social media watchers say when a video “goes viral.” And where there are viewers, there is money to be made, as Barry Petersen now demonstrates:

Remember the girl freaked out by a manatee? (“Ohmygod, I see it! I see it! It’s right next to me!”)

Or the baby slathered in peanut butter. (“Does that feel good?” “Yah!”)

And surely you’ve seen mom in a Chewbacca mask? (“That’s not me making that noise -- it’s the mask! Arrrgggggggg!”)

While we had fun watching, Jonathan Skogmo was striking gold, turning viral videos from big laughs into big bucks.

The “Chewbacca Mom” video received more than 150 million views, in 24 hours. “And there’s no doubt about it -- I bet you that Chewbacca mask will be in the Smithsonian someday,” Skogmo said.

Five years ago he founded Jukin Media. (Jukin is Chicago street slang for “It’s happenin’.”) His team works 24/7 in Los Angeles, New York and London. When it’s good, Jukin finds who shot it and makes an exclusive deal.

Next thing you know, they’ve marketed the video to late-night talk shows or the local news. The checks come in, and Jukin splits the fees with the videomakers. “As little as a few hundred dollars, to thousands and thousands of dollars,” Skogmo said. “We’ve paid for people’s colleges, family vacations, family trips, holiday gifts.”

Jukin will own rights to the video in perpetuity, but Skogmo adds, “You will be paid every single time someone else licenses that video. We’ve paid over $10 million to video owners.”

Aspiring actor and comedian Matt Little made viral history in September 2015 when his iPhone captured just another surreal New York City moment: a rat carrying a whole slice of pizza down the stairs of a subway station.

“This did feel like lightning in a bottle to me,” Little said.

“It did give me more money for the least amount of work than I’ve ever done in my life,” he told Petersen. “There’s still some money coming in. It was in the new Teenage Mutant Ninja Turtles movie last year!”

Yep: “Pizza Rat” got a movie cameo, something Matt Little still hopes to get.

Keep in mind, these videos have a global audience, for being “language agnostic.” A good example, Skogmo said, was the girl blown away by the wind while opening a door. “A cute kid here in America is gonna be a cute kid in Germany,” he reasoned.

By now, you’re asking, “Can I turn my cat video into money?”

Skogmo warns, “These videos are raw, they’re organic. You can’t re-manufacture these moments. These are real-life moments.”

And the competition is beyond fierce; 400 hours of new videos are uploaded every minute on YouTube alone.

And Jukin is not the only company doing this.

“Everyone literally in the world with a cellphone camera works for you,” said Petersen.

“To an extent, that is true!” Entman said.

Think of it as democracy meets storytelling. Anyone, anywhere can capture a moment … make us laugh … make us cry … and make some money.