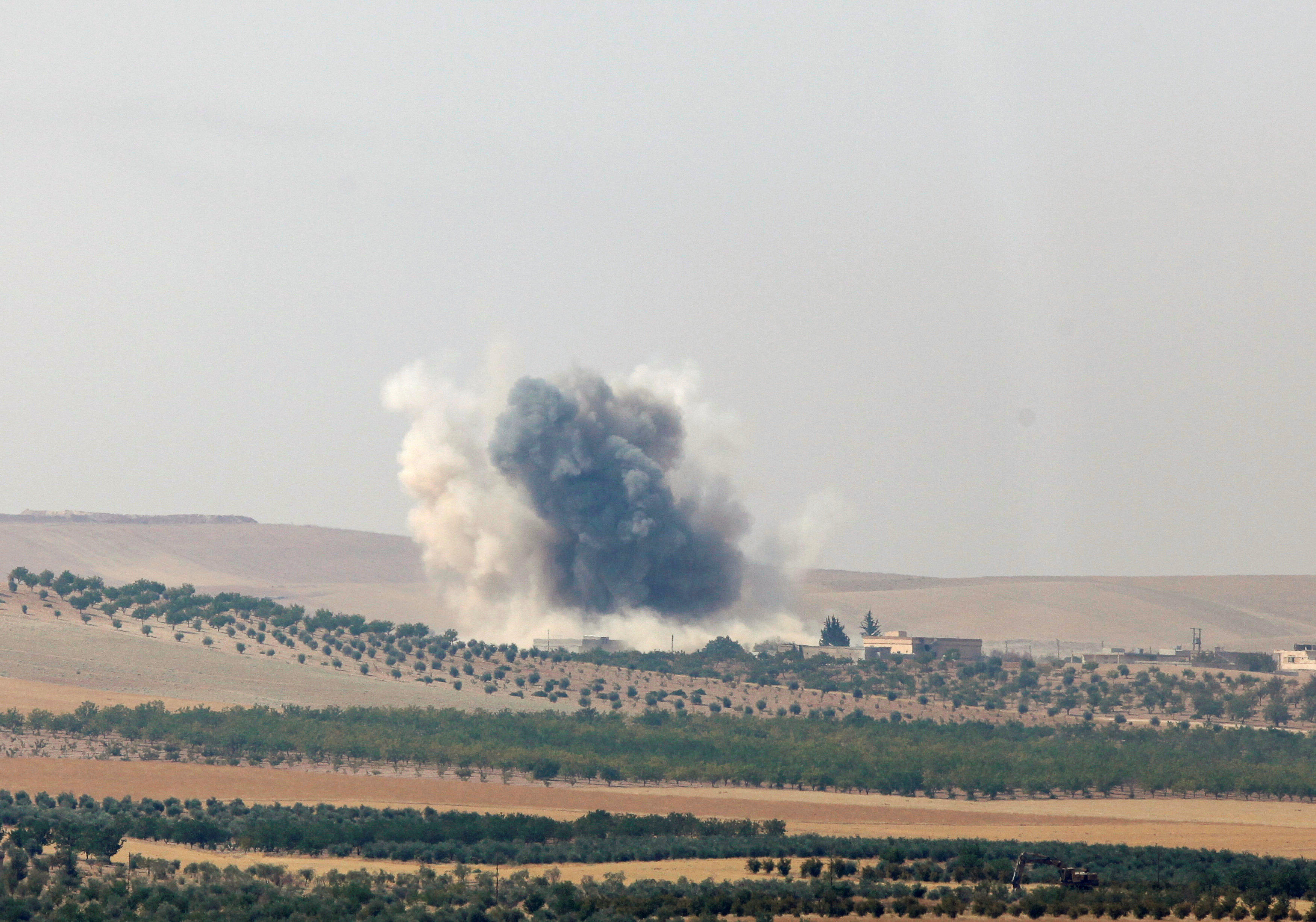 ANKARA, Turkey -- After a pre-dawn barrage of heavy artillery and airstrikes, Turkish tanks and special forces pushed into Syria on Wednesday in a U.S.-backed assault retaking a border town from militants with the Islamic State of Iraq and Syria, or ISIS, and contain Kurdish expansion. It marked the NATO member’s most significant military involvement so far in the Syria conflict.

On Wednesday night, Turkish President Recep Tayyip Erdogan said the border town of Jarablus was taken back from ISIS.

During a press statement with visiting U.S. Vice President Joe Biden, Erdogan also reiterated his opposition to a future role for Syrian President Bashar Assad, saying the country could never “reach democracy” under his leadership.

Erdogan said the Syrian rebels, “together with those who are from Jarablus, have now taken it back.” He said the rebels have taken over “government and official residences,” and ISIS “has been forced to leave Jarablus.”

“We strongly support what the Turkish military has done, we have been flying air cover for them,” Biden said, adding that “we believe very strongly that the Turkish border should be controlled by Turkey.”

CBS News correspondent Holly Williams says the town is key because it lies on the only section of Turkey’s 500-mile-long border with Syria that was under the control of ISIS. Thousands of foreign fighters have used the Turkey-Syria border to cross into the war zone.

The move came on the same day that Biden arrived in Turkey, trying to shore up relations with one of America’s most difficult allies. The two NATO members have a fundamental disagreement about how to tackle ISIS.

The U.S. is working closely with Kurdish fighters, but as Williams reports, Turkey says the Kurdish group is a terrorist organization, and has recently shelled its positions at the same time that it’s hitting ISIS.

The unprecedented incursion marked a dangerous escalation in the Syrian conflict - and demonstrates the twisted rivalries that run through the war.

Turkey has been deeply concerned by the advances of the main U.S.-backed Syrian Kurdish militia, known as the YPG, which after months of taking territory from ISIS was poised to control nearly the entire Syrian side of the border with Turkey. The YPG is also linked to Kurdish rebels waging an insurgency in southeastern Turkey.

Speaking in Ankara, Biden backed Turkey’s demand for limits on Kurdish expansion. Kurdish forces “must move back across the Euphrates River. They cannot, will not, under any circumstance get American support if they do not keep that commitment,” he said.

A senior U.S. administration official told The Associated Press that U.S. advisers have been working closely with Turkey on plans for the Jarablus operation, providing intelligence and air cover. The official was not authorized to discuss the military operations publicly and spoke on condition of anonymity.

Hours after the start of the operation, rebels backed by the Turkish forces battled their way through several ISIS-held villages and entered Jarablus. Capt. Abdel-Salam Abdel-Razzak, spokesman for the Nour al-Din al-Zinki rebel group, told the AP that the fighters were combing Jarablus for “pockets” of ISIS militants.

Erdogan said the military operation aims to prevent threats from “terror” groups, including ISIS and the YPG. He said the operation was in response to a string of attacks in Turkey, including an ISIS suicide bombing at a wedding party near the border which killed 54 people.

A senior official with the YPG’s political arm warned Turkey will pay the price. Saleh Muslim, the co-president of the Democratic Union Party or PYD, tweeted that “Turkey is in Syrian Quagmire. Will be defeated as Daesh” will be. He used the Arabic language acronym for ISIS.

Turkish Foreign Minister Mevlut Cavusoglu accused the Kurds of having a secret agenda to establish a state. “If his (Muslim) intention had been to fight Daesh then he wouldn’t oppose such an operation... And so the PYD’s secret agenda is out in the open.”

ISIS-held Jarablus is a key lynchpin in the Turkish-Kurdish rivalry. The town lies on the western bank of the Euphrates River at the point where it crosses from Turkey into Syria.

The YPG and other Syrian Kurds stand on the east bank of the river, and from there they hold the entire border with Turkey all the way to Iraq. They also hold parts of the border further west, so if they ever took control of Jarablus, they would control almost the entire stretch.

Last month, Kurdish forces and their allies scored a major victory, crossing west of the Euphrates to retake the town on Manbij from ISIS militants. They now say they will push further west to assault the ISIS-held town of al-Bab.

Turkey codenamed its cross-border assault “Euphrates Shield,” suggesting the aim was to keep the YPG east of the Euphrates River.

Turkish Prime Minister Binali Yildirim said that in Biden’s talks in Ankara, the two sides reached agreement that that the Syrian Kurdish forces “should never spread west of the Euphrates and not enter any kind of activity there.”

Cavusoglu said Syrian Kurdish forces must cross back to the east side of the Euphrates as soon as possible. “Otherwise, and I say this clearly, we will do what is necessary.”

The Syrian government denounced the Turkish military incursion and called for an immediate end to what it described as a “blatant violation” of Syrian sovereignty. It said Turkish tanks and armored vehicles crossed into Syria under the cover of U.S.-led airstrikes.

Turkey has backed rebels against Assad throughout Syria’s civil war. It has conducted small, brief special forces operations in the past.

But Wednesday’s assault was its first major ground incursion.

The operation began at 4 a.m. with intense Turkish artillery fire on Jarablus, followed by Turkish warplanes bombing ISIS targets in the town. Then up to 20 tanks and a contingent of special forces moved across the border, according to Turkey’s private NTV television and several Syrian opposition activists.

Ahmad al-Khatib, a Syrian opposition activist embedded with the rebels, said some 1,500 opposition fighters were involved. He said the fighters come from the U.S.-backed Hamza brigade, as well as rebel groups fighting government forces in Aleppo, such as the Nour el-Din el Zinki brigade, the Levant Front, and Failaq al-Sham.

Fighters from the powerful and ultraconservative Ahrar al-Sham brigade are also present, he said.

Biden’s visit comes at a difficult time for ties between the two NATO allies. Turkey is demanding that Washington quickly extradite a U.S.-based cleric blamed for orchestrating last month’s failed coup while the United States is asking for evidence against the cleric and that Turkey allow the extradition process to take its course.

But Biden’s comments put Washington and Ankara on the same page on limiting the advances by the United States’ other main ally in the conflict, the Syrian Kurds.

The capture of the town of Manbij last month from ISIS heightened Turkey’s fears. It was seized by the Kurdish-led group known as the Syria Democratic Forces, or SDF. The U.S. says it has embedded some 300 special forces with the SDF, and British special forces have also been spotted advising the group.