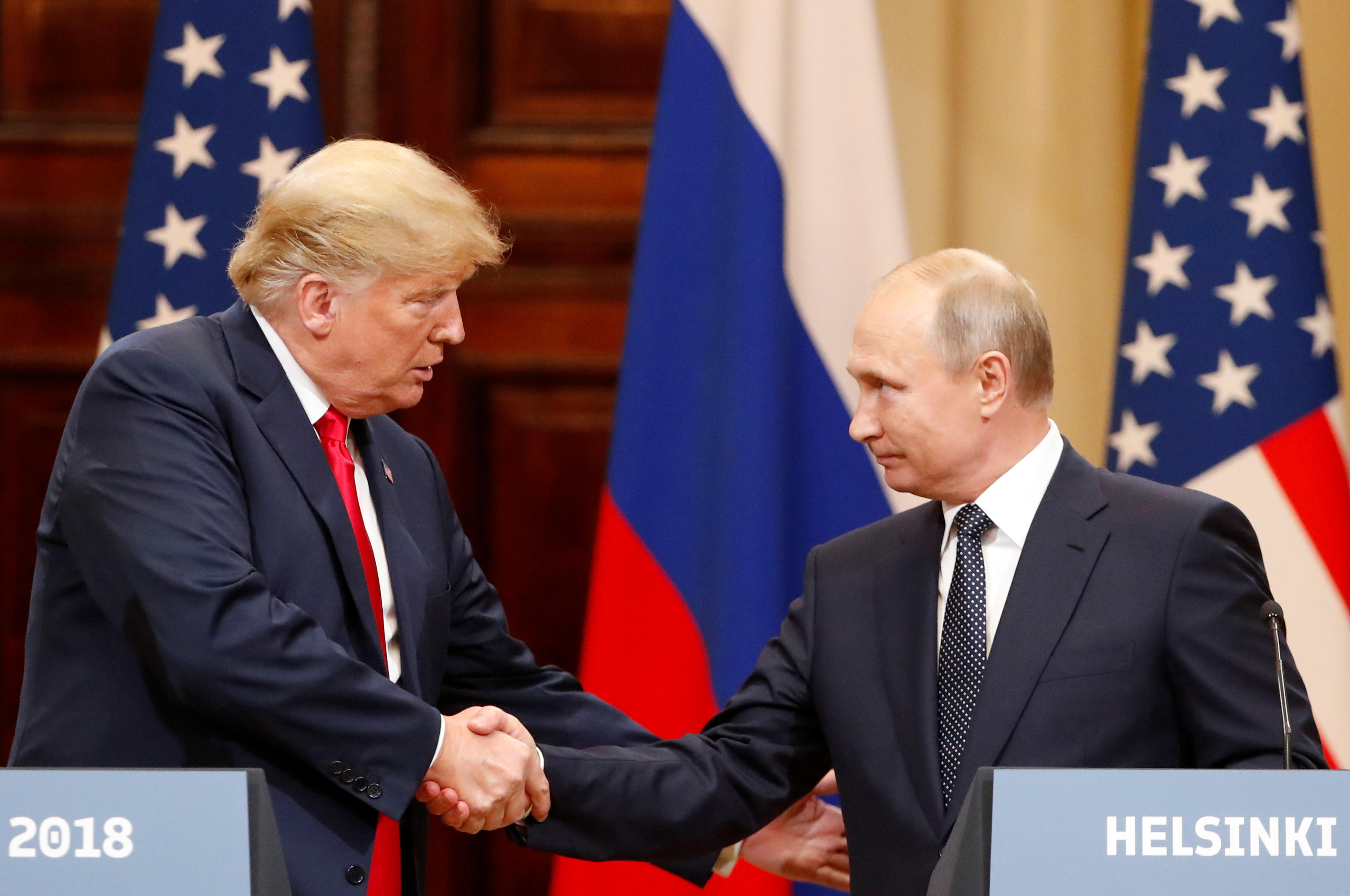 WASHINGTON -- Capping a week of drama, back tracking, a double negative and blistering statements from allies about his attitude toward Russian election interference, President Trump on Sunday was back to referring to "a big hoax."

Mr. Trump spent days trying to reassure the country that he accepts that the longtime foe interfered in the 2016 election after his public undermining of U.S. intelligence agencies in Helsinki while standing alongside Russian President Vladimir Putin. But Mr. Trump cast doubt once again in a Sunday tweet, diminishing at least the significance, if not the existence, of the interference and the U.S. investigation into Russia's actions.

"So President Obama knew about Russia before the Election," Mr. Trump tweeted. "Why didn't he do something about it? Why didn't he tell our campaign? Because it is all a big hoax, that's why, and he thought Crooked Hillary was going to win!!!"

It was not immediately clear whether Mr. Trump was suggesting that the entire notion of Russian interference -- U.S. intelligence agencies unanimously concur it took place and Mr. Trump reluctantly accepted their assessment amid the firestorm -- was fraudulent, or just the investigation of potential collusion by Mr. Trump associates with Russian agents.

Either way, it appeared to keep alive a controversy that had separated Mr. Trump from aides and longtime political supporters and brought some of the most striking rebukes of his tenure in the Oval Office.

"The evidence is overwhelming and the president needs to say that and act like it," said Republican Rep. Trey Gowdy, the chairman of the House Oversight Committee, in an interview with "Fox News Sunday" aired hours before Mr. Trump's tweet.

Mr. Trump's latest missive came hours after he asserted without evidence that newly released documents relating to the wiretapping of his onetime campaign adviser Carter Page "confirm with little doubt" that intelligence agencies misled the court that approved the warrant.

But lawmakers from both political parties said that the documents don't show wrongdoing and that they even appear to undermine some previous claims by top Republicans on the basis for obtaining a warrant against Page.

Visible portions of the heavily redacted documents, released Saturday under the Freedom of Information Act, show the FBI telling the court that Page "has been collaborating and conspiring with the Russian government." The agency also told the court that "the FBI believes Page has been the subject of targeted recruitment by the Russian government."

The documents were part of officials' application for a warrant to the secretive foreign intelligence surveillance court, which signed off on surveilling Page.

Mr. Trump tweeted Sunday on the documents: "As usual they are ridiculously heavily redacted but confirm with little doubt that the Department of 'Justice' and FBI misled the courts. Witch Hunt Rigged, a Scam!"

The release appears to undercut some of the contentions in a memo prepared by House Intelligence Committee Chairman Rep. Devin Nunes earlier this year. Nunes, R-Calif., and other Republicans had said that anti-Trump research in a dossier prepared by former British intelligence agent Christopher Steele and paid for by Democrats was used inappropriately to obtain the warrant on Page.

While the documents confirm that the FBI relied, in part, on information from Steele to obtain the initial warrant, they also show how the FBI informed the court of his likely motivation.

A page-long footnote in the warrant application lays out the FBI's assessment of Steele's history and the likely interest of his backer, adding that despite the political concern, the bureau believed at least some of his report to be "credible."

Democratic Rep. Adam Schiff of California, a ranking member on the House Intelligence Committee, said the documents detail "just why the FBI was so concerned that Carter Page might be acting as an agent of a foreign power."

"It was a solid application and renewals signed by four different judges appointed by three different Republican presidents," Schiff said on ABC's "This Week."

In a statement late Sunday, Nunes said the documents supported his committee's view "that unverified information from the Steele dossier formed an essential part of all the FISA applications on Carter Page. It proves that the FBI used outright political propaganda to spy on an American citizen during the election."

Republican Sen. Marco Rubio of Florida also broke with Mr. Trump, saying he didn't think the FBI did anything wrong in obtaining warrants against Page.

"I have a different view on this issue than the president and the White House," Rubio said Sunday on CBS' "Face the Nation." ''They did not spy on the campaign from anything and everything that I have seen. You have an individual here who has openly bragged about his ties to Russia and Russians."

When asked if the information collected from Page using a FISA court order was justified, Rubio told "Face the Nation" moderator Margaret Brennan that the FBI had "reason to believe" Page was a person of interest given his openness about his contacts with Russians.

On Sunday, Page said on CNN's "State of the Union": "I've never been the agent of a foreign power."

In a 2013 letter, Page had described himself as an "informal adviser' to the Kremlin but now said "it's really spin" to call him an adviser.

Page has not been charged with a crime, but he has been interviewed by the FBI and congressional investigators about his ties to Russia. White House officials have argued that Page, announced by the president in early 2016 as a foreign policy adviser, played only a minor role in the Trump campaign.

The documents released Saturday include the FBI's October 2016 request to surveil Page and several renewal applications. It marks the first time in the more than 40-year history of the highly secretive court that underlying documents for a warrant have been released.