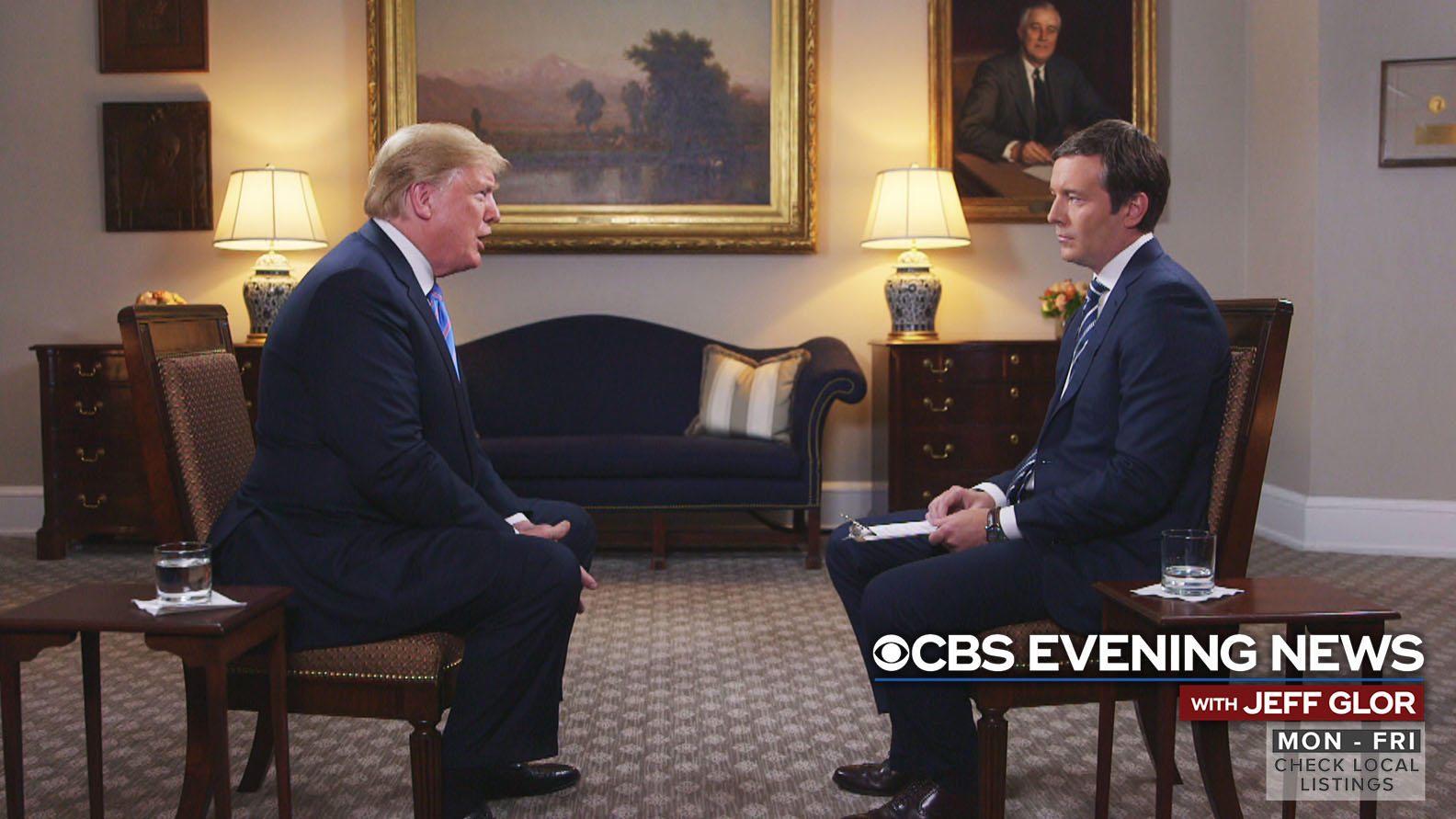 President Trump again expressed confidence in U.S. intelligence agencies and their assessment of Russian interference Wednesday, but declined to say whether he believes Vladimir Putin was lying when he denied Russia was behind the meddling effort. Mr. Trump made the comments in an interview with "CBS Evening News" anchor Jeff Glor at the White House.

Mr. Trump said he believes it's "true" Russia meddled in the 2016 election and said he directly warned Putin against interfering in U.S. elections during their one-on-one meeting in Helsinki, Finland, on Monday. Asked what he said to Putin, Mr. Trump responded, "Very strong on the fact that we can't have meddling, we can't have any of that ... I let him know that we can't have this, we're not going to have it, and that's the way it's going to be."

Mr. Trump also expressed confidence in Director of National Intelligence Dan Coats, whose dire warnings about U.S. hacking vulnerabilities he had questioned in a previous interview.

"Well, I accept. I mean, he's an expert," Mr. Trump said Wednesday. "This is what he does. He's been doing a very good job. I have tremendous faith in Dan Coats, and if he says that, I would accept that. I will tell you though, it better not be. It better not be."

Mr. Trump said he also accepts Coats' assessment that the threat from Russia is ongoing. But he declined to say whether his faith in the intelligence community leads him to the conclusion that Putin's denials are untrue. "So if you believe U.S. intelligence agencies, is Putin lying to you?" Glor asked.

Mr. Trump has been on the defensive for the past two days after failing to defend the intelligence community during a press conference with Putin in Helsinki. Standing beside the Russian leader, Mr. Trump seemed to lend credence to Putin's insistence that his government was not involved in the effort to influence the 2016 campaign. In the face of withering backlash among even those in his own party, Mr. Trump on Tuesday said he misspoke, attempting to clarify that he believed the intelligence community.

On Wednesday, the president said he now has confidence in intelligence agencies, but blasted former leaders like former DNI James Clapper and former CIA Directors John Brennan and Michael Hayden. All three have been vociferous critics of the president -- after the president's press conference in Helsinki, Brennan said Mr. Trump's performance was "nothing short of treasonous."

Mr. Trump called Brennan a "low-life" in Wednesday's interview, saying that "in the past, it's been terrible."

Following the airing of the CBS interview, Clapper responded to Mr. Trump's comments on CNN. "I think I'm speaking for John Brennan and Mike Hayden, it's almost a badge of honor, when the President sees fit to go after individual private citizens," said Clapper. "And I think I can speak as well for all of us to say, and I include Jim Comey in this, the only reason we've spoken out about all this is our genuine concerns about this President and this Presidency and its assaulting values and institutions and standards of this country which collectively we've spent decades defending."

Earlier Wednesday, Mr. Trump sparked confusion about where he stands on whether Russia is continuing to target the U.S., given Coats' assessment that the threat to America's digital infrastructure is current. White House press secretary Sarah Sanders told reporters that Mr. Trump's response to a reporter's question had been misconstrued. When he said "no," she said, he was not answering the reporter's question about whether he thought Russia is still targeting the U.S.

"I had a chance to speak with the president after those comments, and the president was -- said 'Thank you very much,' and was saying 'No' to answering questions," Sanders said, answering a question from CBS News chief White House correspondent Major Garrett.

On Tuesday, Mr. Trump said he misspoke when he suggested otherwise in a widely criticized press conference Putin Monday in Helsinki.

"I will begin by stating that I have full faith and support for America's great intelligence agencies, I always have," Mr. Trump said before a meeting with members of Congress on Tuesday. "And I have felt very strongly that, while Russia's actions had no impact at all on the outcome of the election, let me be totally clear in saying that, and I have said this many times, I accept our intelligence community's conclusion that Russia's meddling in the 2016 election took place. It could be other people, also. There are lots of people out there."