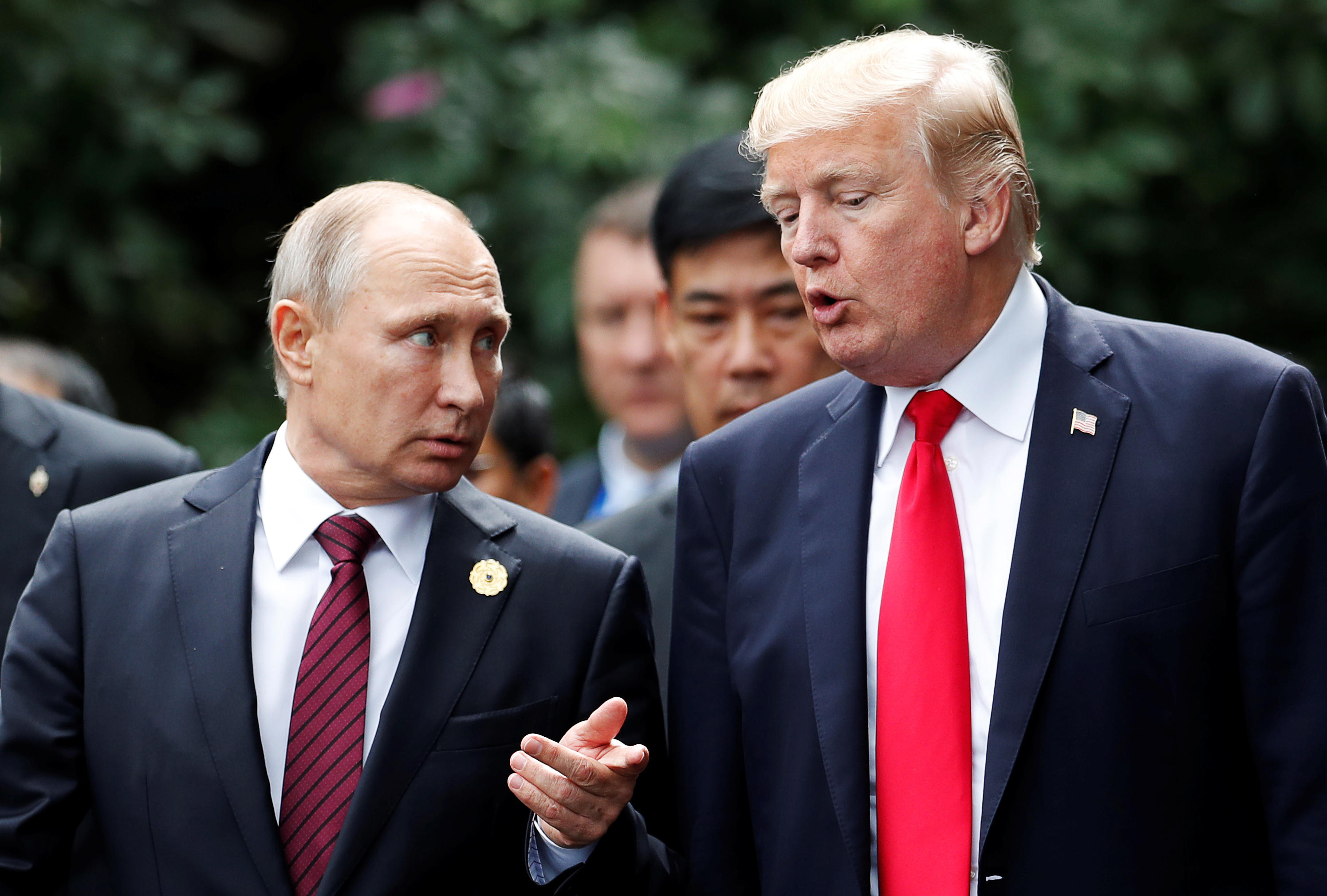 "I believe that he feels that he and Russia did not meddle in the election," Mr. Trump said of Putin at a news conference with Vietnam's President Tran Dai Quang in Hanoi "As to whether I believe it, I'm with our agencies."

"As currently led by fine people, I believe very much in our intelligence agencies," he added.

Top U.S. intelligence officials, including those at the CIA, have concluded that Russia interfered in the election to help the Republican defeat Democrat Hillary Clinton. A special counsel and multiple Congressional committees are also investigating potential collusion between Moscow and Mr. Trump campaign aides. That probe has so far led to the indictments of Mr. Trump's former campaign chairman and another top aide for financial and other crimes unrelated to the campaign, as well as a guilty plea from a Trump foreign policy adviser.

Meanwhile on Saturday night, Mr. Trump sent a flurry of tweets about Russia and its president.

The posts expressed hope for better relations with Russia and were aimed to discredit the worthiness of investigations and continuous reporting looking into the extent of Russia's interference and whether Mr. Trump officials had any role to play.

Mr. Trump also called out the "haters and fools" and accused critics of "playing politics" which he claims bad for America.

Mr. Trump also seemed to suggest Sunday that it was time to remove the sanctions Congress has slapped on Russia in retaliation.

"It's now time to get back to healing a world that is shattered and broken," said Trump. "Those are very important things."

It's a question that has followed Trump since January, when he said for the first time at a press conference in Trump Tower shortly before taking office that he accepted Russia was behind the election year hacking of Democrats that roiled the White House race.

"As far as hacking, I think it was Russia," Trump said then, quickly adding that "other countries and other people" also hack U.S. interests.

But the issue wasn't settled.

Speaking to reporters aboard Air Force One on Saturday, Mr. Trump had said that Putin again vehemently denied the allegations -- this time during an economic summit in Vietnam. Trump said he believed "that when he tells me that, he means it."

Mr. Trump had also dismissed former U.S. intelligence officials as "political hacks" and accused Democrats of using the issue to try to sabotage relations between the two countries, putting lives at risk.

At the news conference, Mr. Trump reiterated his view that it's crucial for the U.S. to get along with Russia, and seemed to suggest that it was time to remove the sanctions Congress has slapped on Russia in retaliation for its election meddling efforts.

"It's now time to get back to healing a world that is shattered and broken," said Mr. Trump. "Those are very important things."

As he traveled to Hanoi, the second-to-last stop of his Asia trip, Mr. Trump told reporters that Putin "said he absolutely did not meddle in our election. He did not do what they are saying he did."

"Every time he sees me, he said: 'I didn't do that.' And I believe -- I really believe -- that when he tells me that, he means it," Mr. Trump said, calling the accusation an "artificial barrier" erected by Democrats.

The president lashed out at the former heads of the nation's intelligence community, and said there were plenty of reasons to be suspicious of their findings. "I mean, give me a break. They're political hacks," Mr. Trump said, citing by name James Clapper, the former director of national intelligence, John Brennan, the former CIA director and his ousted ex-FBI director James Comey, whom Mr. Trump said was "proven now to be a liar and he's proven to be a leaker."

Mr. Trump's comments about Putin and "political hacks" brought criticism from lawmakers with ties to the intelligence community. Rep. Adam Schiff, the California Democrat who is his party's top member on the House's intelligence committee, said in a statement that Trump "fools no one" and that the president understands how the Russians intervened through hacking, social media and their own television coverage of the presidential race.

Sen. John McCain, R-Ariz., the party's presidential nominee in 2008, said in a statement that Mr. Trump's faith in Putin's denial was "naive."

"There's nothing 'America First' about taking the word of a KGB colonel over that of the American intelligence community," McCain wrote, referring to Putin's former career in Soviet intelligence. "Vladimir Putin does not have America's interests at heart."

Trump was in Hanoi for a brief state visit, including Sunday's meeting with Quang at the presidential palace.

In brief remarks after his arrival, Mr. Trump offered help negotiating with China on disputes over the South China Sea. Beijing's island-building there has drawn criticism from Washington, which argues the U.S. has a national interest in freedom of navigation in sea lanes critical for world trade. U.S. Secretary of State Rex Tillerson earlier this month said China's "provocative actions" challenged international law and norms.

"If I can help mediate or arbitrate, please let me know," Mr. Trump offered. "I'm a very good mediator and a very good arbitrator. I've done plenty of it from both sides."

Mr. Trump also said he hoped to have more help from Chinese President Xi Jinping as well as Russia, when it comes to isolating North Korea. "The North Korean situation continues to be a problem. President Xi I think is going to be a tremendous help. I hope Russia likewise will be a tremendous help. I think they can make a big difference," he said.

Trump and Putin did not have a formal meeting while they were in Vietnam for the Asia-Pacific Economic Cooperation summit, but the two spoke informally several times and reached an agreement on a number of principles for the future of war-torn Syria.

Mr. Trump made clear that the issue of Russian meddling in the election hovers over the leaders' relationship and said it jeopardized their ability to work together on issues including North Korea's escalating nuclear program and the deadly conflict in Syria.

"Having a good relationship with Russia's a great, great thing. And this artificial Democratic hit job gets in the way," Mr. Trump told reporters. "People will die because of it."

Mr. Trump had danced around the question of whether he believed Putin's denials Saturday, telling reporters that pressing the issue would have accomplished little.

"Well, look, I can't stand there and argue with him," Mr. Trump said. "I'd rather have him get out of Syria, to be honest with you. I'd rather have him, you know, work with him on the Ukraine than standing and arguing about whether or not -- 'cause that whole thing was set up by the Democrats."

Multiple U.S. intelligence agencies have concluded that Moscow meddled in the election to try to help Mr. Trump win. But Mr. Trump called the former heads of those agencies "political hacks" and argued there's plenty of reason to be suspicious of their findings.

The comments made clear that Mr. Trump still does not take the meddling seriously and sees little benefit in punishing a nation accused of undermining the most fundamental tenet of American democracy: free and fair elections. They also suggest that Mr. Trump is unlikely to work aggressively to try to prevent future meddling despite repeated warnings from senior intelligence officials that Russia is likely to try to interfere again.

Meanwhile, a special counsel investigation of potential collusion between Moscow and Mr. Trump campaign aides so far has resulted in two indictments for financial and other crimes unrelated to the campaign, as well as a guilty plea. Congressional committees have also been interviewing campaign and White House staff.

"Trump really raised the topic of so-called interference in US elections," Putin's spokesman, Dmitry Peskov, was quoted by Russian news agencies as telling reporters. "Putin categorically rejected even the hypothetical possibility that Russia could have in some way interfered in the U.S. electoral process."