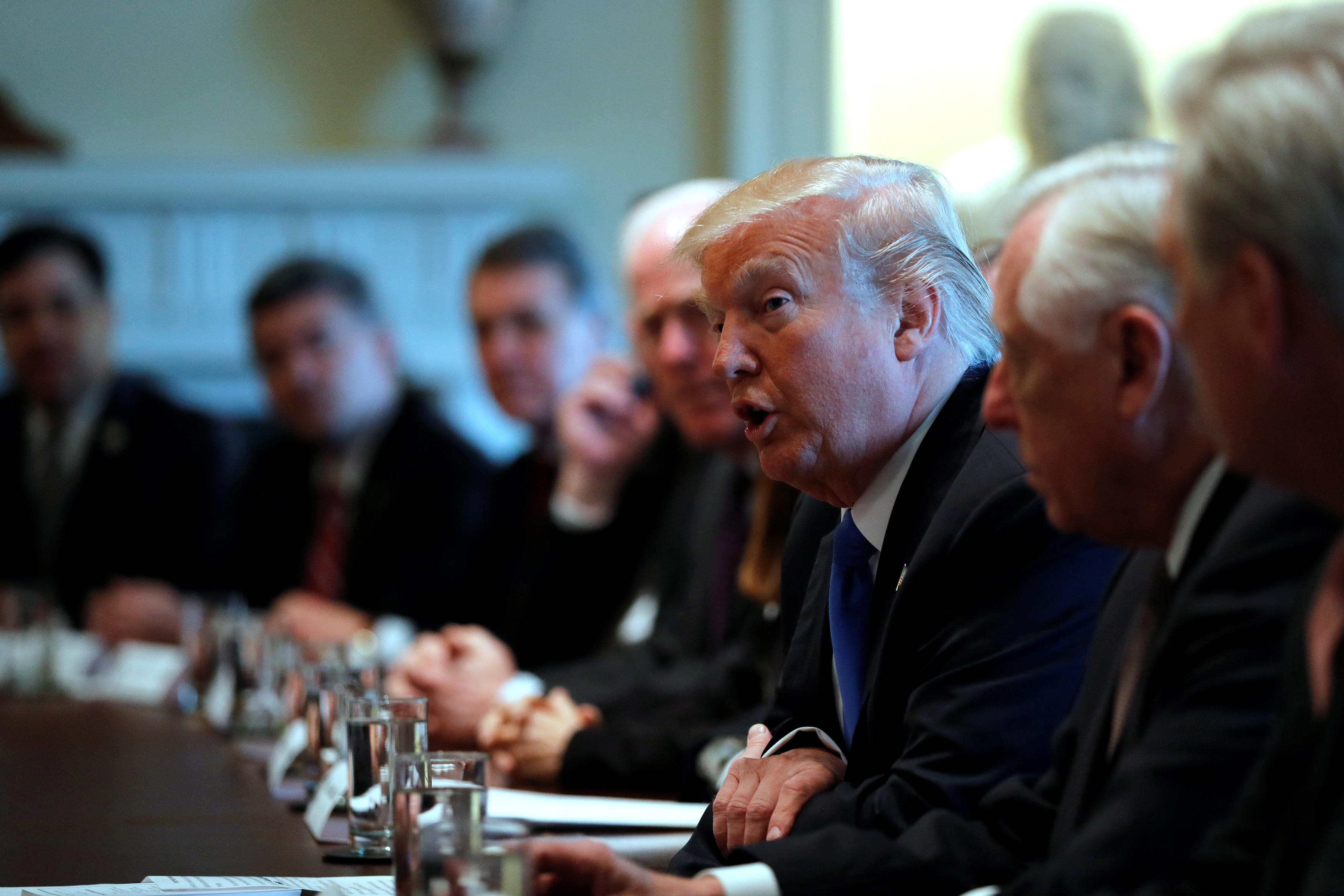 President Trump hosted a bipartisan group of lawmakers at the White House on Tuesday to talk about revamping the nation's immigration policies. During the meeting, Mr. Trump told the group that he hoped to come up with "an answer for DACA" and said it should be a "bill of love" while remaining firm that his long-planned border wall would be part of any DACA agreement reached.

"I really do believe Democrats and Republicans, the people sitting in this room, really want to get something done," Mr. Trump said. He told them they should "put country before party," and he called for a permanent fix rather than a stop-gap bill.

At same time however, Mr. Trump said that the U.S. needs stronger borders to block drug trafficking into the country, and he insisted on ending "chain migration" and "visa lottery" programs. The president said, as he has in the past, that other countries "give you the people they don't want" and "the United States takes those people."

Instead, Mr. Trump said, he'd like to see merit-based immigration in any bill.  "I very much think the American public wants that," he said.

The meeting was also a rare moment for civil discussion and debate amongst both Republicans and Democrats, all calling for bipartisan approaches to the legislation.

House Majority Leader Kevin McCarthy said the group should make a commitment to a permanent solution addressing all the president's concerns, saying, "We are all going to have to give a little."

The president said that the process of legislation should begin in the House, and he turned to Republican Rep. Bob Goodlatte of Virginia, who said he would be introducing a bill in the coming days.

Trump ally Sen. Lindsey Graham said he's been working on the immigration issue for 10 years, and he's for a pathway to citizenship. He urged the group to look more broadly at comprehensive immigration reform.

"You created an opportunity here, Mr. President, and you need to close the deal," Graham said.

In response, Mr. Trump said, "If you want to take it that further step, I'll take the heat." He added, "You are not that far away from comprehensive immigration reform."

The president also appeared to suggest he would be open to a two-phase approach to DACA and border security, then comprehensive immigration reform legislation.

Democrat Dianne Feinstein posed the question to the president, "What about a clean DACA bill now, with a commitment that we go into a comprehensive immigration reform procedure?"

The president replied, "I would like it…I think a lot of people would like to see that."

"I haven't seen us get this close and having this discussion in quite a few years. I think we can make this happen. We all know it, we've done it before," Rep. McCarthy commented on the budding progress.

The president added, "I think we'll do DACA and we can certainly start comprehensive immigration reform the following afternoon. OK? We'll take an hour off and then we'll start. I do believe that. Once we get DACA done, if it's done properly, we have taken the first jump of comprehensive reform."

The president ended his meeting saying he was "very much reliant on the people in this room" saying he had "great confidence" in those gathered on Tuesday.

The meeting came just five days after the president said the current immigration system in place "fails Americans" and that any legislative solution for the Deferred Action for Childhood Arrivals (DACA) program for so-called Dreamers "must secure the wall."

Noticeably absent from Tuesday's meeting were Democratic leaders Sen. Chuck Schumer, of New York, and Rep. Nancy Pelosi, of California. The two had previously attended a meeting with Mr. Trump before the holiday season to discuss government funding in an effort to avoid a federal shutdown but the group's sparring over DACA legislation has frequently created tension over the past few months.

Following the over 45-minute long discussion, Democrats and Republicans spoke to reporters outside the White House, both left with the impression that the meeting was about narrowing down the scope of topics for further debate. They both said that further immigration discussion could start as early as tomorrow.

But some majors differences remained, including whether or not there would be "phases" to the immigration legislation as well as language addressing the border wall.

"I think the President uses "wall" for "border security" I think he thinks they're interchangeable," Rep. Steny Hoyer said.

Sen. Graham later called the White House huddle one of the "most fascinating meeting I've been involved with in twenty plus years in politics."

"President Trump has the right attitude.  Now it is up to all of us in Congress to come up with a proposal that gets the job done," he added.

Some time after the meeting's conclusion, the White House said in a statement that Mr. Trump and members of Congress had reached an agreement.

"During the closed-door portion of the meeting, they reached an agreement to negotiate legislation that accomplishes critically needed reforms in four high-priority areas: border security, chain migration, the visa lottery, and the Deferred Action for Childhood Arrivals policy."