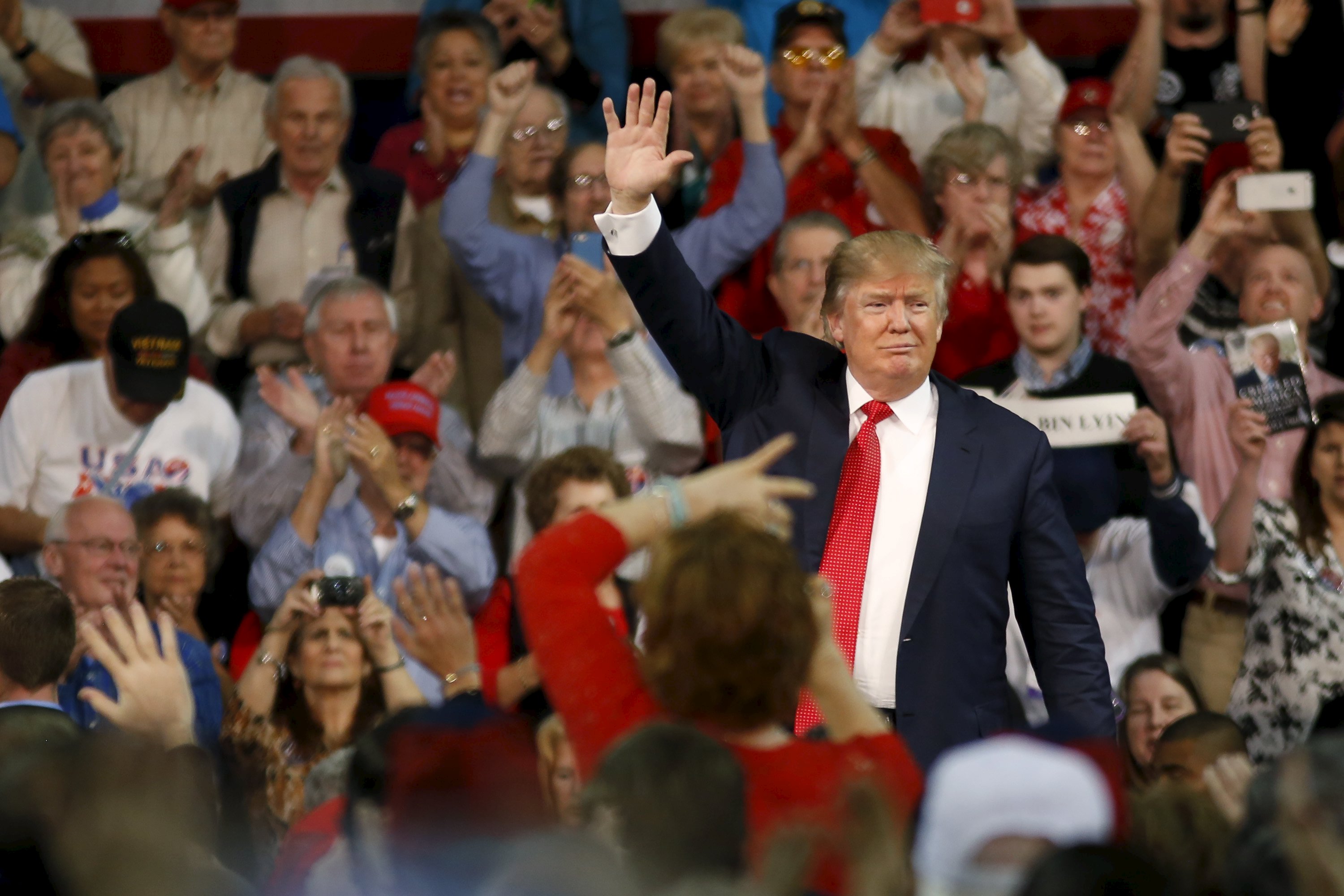 AIKEN, S.C. -- A day after seeming to question Texas Sen. Ted Cruz's Evangelical credentials in Iowa, GOP front-runner Donald Trump took the stage in Aiken, South Carolina on Saturday for an hour-long town hall -- and didn't mention Cruz once, or repeat his barb that "not a lot of Evangelicals come out of Cuba." In fact, he didn't mention a single one of his opponents for the Republican nomination -- a rarity for Trump on the campaign trail.

Trump did address his veiled shot at Cruz on Fox News earlier in the day.

"I think I sort of mean it," Trump said, right after saying that his Des Moines comment "sort of was fun."

In Aiken, Trump talked about a number of topics that are typically not mainstays of his stump speech. Seated in a packed gymnasium at the University of South Carolina-Aiken, Trump took questions for an hour from South Carolina Attorney General Alan Wilson, as part of the Conservative Leadership Project's seventh presidential forum.

Wilson is the son of Congressman Joe Wilson, famous for yelling "You lie!" at President Barack Obama during a speech to a joint session of Congress.

Trump answered what he would be looking for in a Supreme Court justice appointee. While saying that the next president might appoint four justices, Trump said "the balance right now has gotten not so good." Trump went on to say to applause that he wanted "strongly conservative" justices and "great scholars" that "respect and admire" our Constitution.

Later in the town hall, Trump said that, on the current bench, he admired "highly underrated" Justice Clarence Thomas because he has been "consistent" and that Justice Samuel Alito is "terrific."

Trump also took questions about EPA regulations, the Dodd-Frank banking reform bill and his plans for the Affordable Care Act, should he become president. On EPA regulations, Trump gave a particularly winding answer about how different areas have varying levels of water supplies. He accused the EPA of overregulating.

"You know, I'll give you one regulation, So I build, and I build a lot of stuff. And I go into areas where they have tremendous water, I won't use names, but tremendous water," Trump said. "And you have sinks where the water doesn't come out. Right? We all know, you go buy a new sink. And you turn it on, well, aw, I want to wash my hands. You have showers where I can't wash my hair properly, it's a disaster!"

He continued, "...Now there's no water problem, you know it's one thing in the desert. The problem is you stay under the shower for five times as long, you end up wasting more water than you would've the other way."

Trump once again touted his plan to ban all Muslims from entering the country temporarily, saying that many of those who disagreed with him earlier this week are coming around.

"We have to get our country under control," Trump said. "And all of a sudden I see the same thing. It was pretty brutal four days ago, for Trump, do you agree?... Now all of a sudden you're seeing everyone coming in, I'm even seeing liberal hosts, and people, they're saying you know, he's got a point."

Not everyone in the crowd agreed.

"That might be a little extreme I think," said 49-year-old Aiken resident Jeff Hadden. "I think sometimes maybe he just says things to kind of drum up emotions. I don't know that he would really go through with that."

As has been the case at recent rallies, at least ten protesters were escorted out during the rally. At least two protesters were ejected beforehand. One was a Muslim - Jibril Hough -- a spokesperson for the Islamic Center of Charlotte. It wasn't clear why he was kicked out initially but he eventually found his way back in during the speech, only to be escorted out again.

There were a number of other disruptions. One group of protesters held a sign reading "REFUGEES WELCOME."

And of course, like at most Trump rallies, there were sights and sounds not seen at other events. In Aiken, one man showed up dressed as Abraham Lincoln. Another walked around as Santa Claus. Another man wore a sombrero -- Trump pointed him out during the town hall and invited him to stand up.

The protest disruptions didn't change the enthusiasm of Trump's fervent supporters. Gary Itzstein, a 67-year-old Australian, became a United States citizen just a few months ago. He is a horse trainer in Aiken.

"He's just straight steak and potatoes," Itzstein said. "He's speaking straight forward and gives you his straight out points of what most Americans are thinking, including me. There's no here or wherefores. That's it."