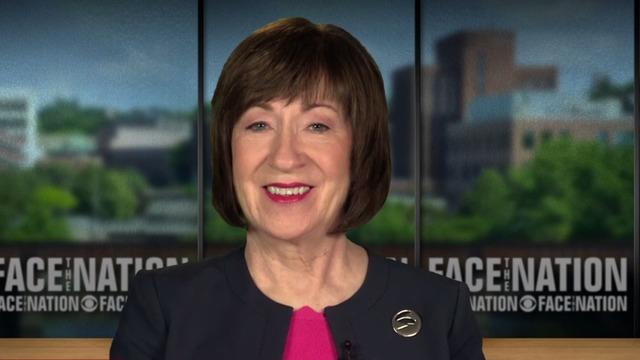 The Trump administration is facing intense scrutiny over its "zero tolerance" policy for prosecuting immigrants trying to cross the southern border illegally, which leads to children being separated from their families. The government says nearly 2,000 children have been taken away from their parents so far, and the number might be much higher.

Sen. Susan Collins, R-Maine, joined us to discuss the administration's immigration policies, efforts in Congress to reform the system and more.

The following is a transcript of the interview with Collins that aired Sunday, June 17, 2018, on "Face the Nation."

MARGARET BRENNAN: Now Maine Republican Senator Susan Collins, who joins us this morning from Bangor. Senator, welcome to the show. You just heard a lot about the Russia probe and the president's attorney on that. Is there anything you'd like to respond to?

SEN. COLLINS: Well I think it's helpful that the president's lawyer Rudy Giuliani has clarified - that he would recommend against pardons. But I think it would be more helpful if the president never mentioned the word pardon again with respect to the Russian investigation because he wants to get that Russian investigation completed. And every time he brings up the issue of pardons it gives the investigators something else that they have to look into.

MARGARET BRENNAN: Point taken. Senator, on this other issue of immigration - do you support the Trump administration's zero tolerance policy that is leading to the separation of parents and children when they cross illegally into the U.S.?

SEN. COLLINS: I do not. Senator Jeff Flake and I have written to the administration to ask for more information about the policy, but we already know two things. First, from the experience of previous administrations it does not act as a deterrent to use children in this fashion. And second, and much more important, it is inconsistent with our American values to separate these children from their parents unless there's evidence of abuse or another very good reason.

MARGARET BRENNAN: I've read that letter that we just showed viewers there. - According to Homeland Security, there are about 2,000 children that have been separated from their parents since this policy has been implemented. Your letter specifically asks about those who are legally claiming asylum. Is it your belief, your suspicion here, that the number is actually far higher than 2,000?

SEN. COLLINS: It may well be higher and that's what we need to know. What we do know is this. The Secretary of Homeland Security testified that if parents present at a legal port of entry with their children, with a claim of asylum, that the children would not be taken away. Yet, there are numerous credible media accounts showing that exactly that is happening, and the administration needs to put an end to that right off. Ironically, it also encourages illegal crossing. If in fact- children are being separated from their parents when their parents attempt to cross legally with a claim of asylum.

MARGARET BRENNAN: Senator Dianne Feinstein and other Democrats are putting forth legislation to stop this. You are in the president's own party. What are you doing to stop it?

SEN. COLLINS: Well first of all, let me say that I know Senator Feinstein keeps the- cares deeply about these children. She's a very compassionate person. But her legislation is not the answer. It is far too broad. It would essentially prevent arrests within 100 miles of the border even if the person has committed a serious crime, or is suspected of terrorist activity. So that is not the answer. What I have done is worked with a bipartisan group of senators, and in February we presented a bill that would have taken initial steps to fully fund the president's border security initiative, including his wall, technology, more personnel, and provided a pathway to citizenship for the Dreamer population, those young people who were brought to America through no decision of their own. It garnered 54 votes on the Senate floor. Regrettably, the night before, the Department of Homeland Security issued a- an inflammatory press release that torpedoed the bill. I think we should try again. We should not give up. It is important that we enact immigration reform.

MARGARET BRENNAN: It-It's interesting that you say that the White House didn't put its shoulder behind it, and in fact, you're- you're suggesting, tried to defeat what you put forward. Last night, a senior administration official told me, quote, "the White House is on the side of the angels with the separation policy because they say they are helping to stop child smuggling." What do you make of that defense?

SEN. COLLINS: Obviously if a child is being abused in any way, including trafficking, that is justification for separating the parent from- the child, and arresting- the parent and protecting the child. But that is not what is going on. What the administration has decided to do is to separate children from their parents to try to send a message that if you cross the border with children, your children are going to be ripped away from you. That's traumatizing to the children who are innocent victims, and it is contrary to our values in this country. That's not to say that we shouldn't act to try to curb illegal immigration. We should, and I support the president's proposals for border security. We do need to strengthen our security at the border. We need to work with those countries in Central America from which these families are coming to end the gang violence that is encouraging them to leave. And in some cases we need to repatriate the whole family back to the host country. But we know from years of experience that we need to fix our immigration laws and that using children is not the answer.

MARGARET BRENNAN: Senator Susan Collins, thank you for joining us this morning.